I was searching my photo files for a shot of Scotty Peckham, who passed away just before Christmas, and before you could say, ‘Cheese!’ I was so deep into back-in-the-day, I almost forgot what I was looking for. Scott was the nice guy who married Monica Brant about a decade ago, and I’ll come back to his story in a bit.

I started taking pictures in 1994, when my longtime boss, Iron Man Publisher John Balik, handed me a point-and-shoot camera at a contest and said, “People will talk to you more easily if you take their picture.” Here are just a few of those who do—and did. 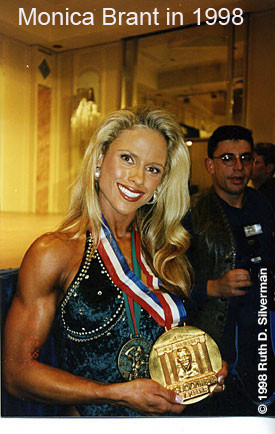 Speaking of Monica, people forget that the longtime Figure star, who is retired from physique shows and currently competing in masters track, was a fitness competitor originally and won the Ms. Fitness Olympia in 1998.

At that point women’s bodybuilding and fitness were the only options for the ladies, and in fitness, then as now, those who were strongest in the routines did not usually have the best physiques, and vice versa. Kind of a balance of the universe, I always thought. Monica was the latter—gifted with great genetics for physique but not necessarily gymnastics.

She was, however, a hard worker and determined, and the one-time equestrian, sprinter and bikini champ from Texas always put on a credible performance. Back then the physiques were judged in one- and two-piece suits, for 50 percent of the score; the routine round was 25 percent; and a fourth round, involving physical feats that changed from year to year, was the final 25 percent.

Although Brant had the structure—“She should be a bodybuilder,” one IFBB judge told me a few years later—she could never get quite lean enough to suit the panel. In the three years of the Fitness Olympia’s existence, she’d finished seventh, seventh and sixth, and she was hardly the favorite when the athletes lined up in Nice, France, in November ’98, for number four.

Instead the buzz was about rising star Susie Curry, who'd beaten Mo at the Fitness International earlier in the year (Brant took second at that show twice), as well as Mary Yockey, winner of the ’97 NPC Nationals. Some folks suggested that Brant could never win—because of "politics." Turned out the joke was on them.

The Olympia contests, all three of them, were held separately in those days, and, fortunately for those of us who got to cover it, this one took place at a beachfront hotel in Nice. It was in a sectioned-off area of a ballroom, and the stage, erected for the occasion, was probably the smallest the contest has ever seen (a surprise to Jenny Worth, who brought a motorcycle as her prop and almost rode into the sunset). Also small was the setup for the audience, judges and press, so we were all pretty close in terms of watching people's faces.

As the 17 competitors came out for the first physique round, jaws dropped. Monica was perfect—in the fitness sense of the word she was absolutely "peeled"—and she knew it. She glowed, standing proud, almost daring the panel not to choose her. She was still glowing when I snapped the accompanying photo, just minutes after she was crowned the ’98 Ms. Fitness Olympia champ, ahead of Curry, Yockey and ’96 winner Saryn Muldrow.

Linda Wood-Hoyte—More Than Just a Septuagenarian 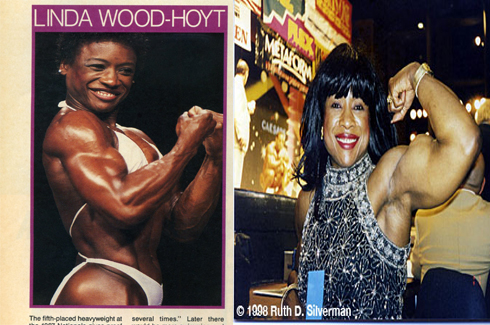 l Linda Wood-Hoyte was one of the first amateur bodybuilders I ever wrote about. We met at the ’87 NPC Women's Nationals in Miami, where I interviewed her along with the top-five finishers in all the three weight classes.

It was the Cory Everson era of women's bodybuilding. Symmetry and proportion were in fashion, the Women's Nationals was held on its own, and making the top five was a big deal. Lynda was fifth in the heavyweights and already getting noticed for not remotely looking her age, which was mid-40s. A former track-and-field athlete, she'd started lifting at 39 and went on to have a distinguished NPC career, including winning the heavyweights at the Team Universe and competing at the IFBB Women's World Amateur Championships twice. A few years ago the IFBB honored her by giving her pro status.

In addition to serving on the judging panels of all the big NPC and IFBB shows for as long as I can remember, Lynda had a 40-year professional-management career in corporate America, and is now a certified personal trainer working one-on-one in her private gym as well as doing nutrition and health counseling. She's also a grandmother and famously has celebrated her last two big birthdays working out with friends at the East Coast Mecca, the Bev Francis Gold's Gym in Syosset, New York.

Now, 71, Wood-Hoyte is represented with two pictures here: the one that accompanied my original interview, which appeared in the February ’88 Flex (photo by Robert Reiff), and a biceps shot snapped at ’98 the NPC USA—although I could have taken it yesterday, and she'd look pretty much the same. 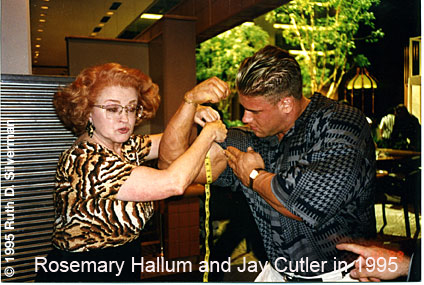 er Was Once a Promising Amateur, Ya Know

Because there was only one women's sport back in the day, I covered men's bodybuilding as well as women's. I learned how to do it, essentially, by following my Iron Man colleague Lonnie Teper around and meeting everybody.

You can see L.T.'s  hand in the lower right corner of the accompanying photo of Rosemary Hallum measuring the biceps of promising newcomer Jay Cutler at the ’95 Mr. Olympia, in Atlanta. Hallum was a lovely, bright woman with a flaming-red bouffant who had become a bodybuilding writer after meeting Robby Robinson on a plane. She free-lanced for MuscleMag International and various other publications under her own name and also the nom de pump Redd Hall, Ph.D.

Cutler was working with diet coach Chris Aceto, now known to Rx Muscle fans as "the Technician," and my recollection is that Aceto was showing the then-22-year-old the ropes at the Big Show. Jay earned his pro card by winning the heavyweight class at the Nationals the following year, and—despite L.T.'s infamous prediction that Cutler was too blocky to be a good pro—the rest is, well, in the record books. I haven't seen Rosie since the Olympia was held at the Mandalay Bay and would love to hear from or of her.

Whatever Happened to America's Fitness Sweetheart?

Kelly Ryan was one of the first superstars of fitness. 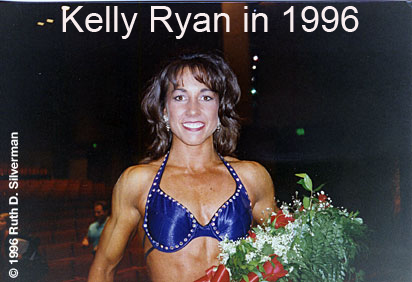 A former gymnast who had worked at one time with Bela Karolyi, she was known for her entertaining, full-of-tricks routines, which earned her the nickname “Flyin' Ryan” from this reporter. Kelly's problem onstage was the opposite of Monica Brant’s: she aced the routines but didn't have a perfect structure. She was runner-up at the Olympia four times, mostly to Susie Curry, and won the International in 2000.

Ryan's narrative took an unexpected turn when she fell for bad-boy-of-bodybuilding Craig Titus, whom she married in 2003. A lot of poor choices ensued, and in December 2005 the couple earned the label of notorious after they murdered their assistant, a young woman named Melissa James, at their home in Vegas one drug-fueled night and set fire to Kelly's cherry-red Jaguar in the desert, with the body in it, subsequently fleeing cross country only to be nabbed at a nail salon in Massachusetts.

Not meaning to be flip, just brief. You can find it all on the Internet, and the tale has inspired at least two books and one true-crime-type TV show. They are incarcerated in Nevada, and divorced, with Craig, who reportedly "fell on his sword" in terms of the more severe charges, likely never to get out and Kelly up for parole in 2015.

I knew them, separately and together. Despite Craig's unsavory and not-undeserved reputation, I am still rocked to my core that they (or any human beings) could commit such heinous acts, not to mention be so delusional.

Kelly has reportedly become very religious and repentant in her incarceration, and I can believe it is sincere. I remember the exuberant, hopeful young woman in the accompanying photo, taken the night she won the Fitness America Pageant in 1996.

A trip through the 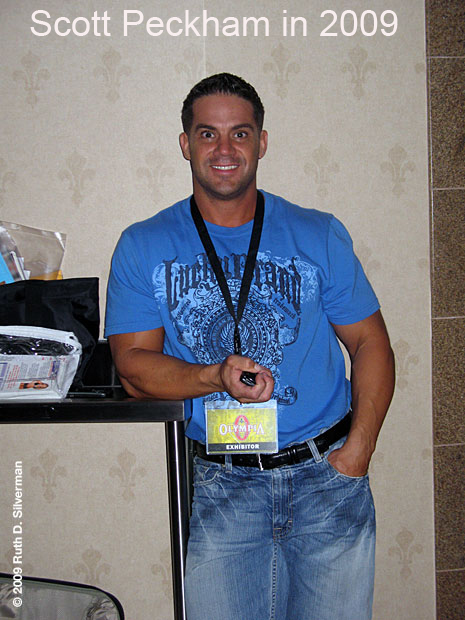 photo files turns up lots of shots of the significant others of physique stars and a fair share of couples who are no longer together. Scott Peckham, the personable gym owner and bodybuilder from Groton, Connecticut, always deserved a grab shot of his own. He and Mo Brant met, as I recall, when she appeared at an event at his Powerhouse Gym in the early mid-2000s. I always imagined that he'd had a crush on her. After they married, they settled outside Austin and appeared to be a golden couple, producing their own reality series on video.

Scott, who was living in Rhode Island, passed away suddenly on December 23, 2013, reportedly of a heart attack. He was 43. To his family, who had endured the loss of his younger brother Ken in an accident a few years ago, it must be devastating.

I didn't know him well, but I was always glad to see him. Darn shame.