What's up Rxmuscle.com?  I'm back from my month long vacation.  Really not much of a vacation but I'm well rested and ready to pick up where I left off.  As most of you may have read, I was moved from Westchester County Jail to a Federal prison.  It's better here in some way but it does have drawbacks. Club Fed it's not!  Listen up; I'm gonna tell you the difference between the county and federal jails that I've experienced and my "move" from one to the other. 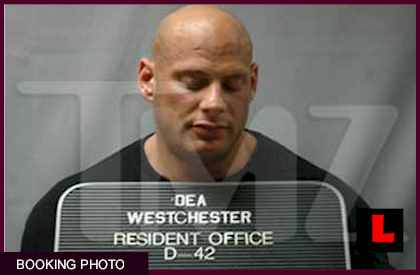 I was sleeping in my cell around 4am when the corrections officer (C.O.) woke me up - I was so happy to be getting the hell out of the country jail but talk about a fucked up day!  4:30 am-8:30am I was put in a bullpen (just a big cell) to wait with ten other inmates for the marshals to pick us up for transfer.  Then we were all belly-chained, handcuffed and leg-shackled and put in a van that had bars on all the windows.  Why was I not surprised?  There was an old woman in a wheelchair; also a prisoner with us.  She had to be picked up and placed in the van.  This struck me as kinda sad to watch.  Not knowing why she was locked up didn't matter to me but just the fact that she was there seemed really depressing!  Next we were taken down to the courthouse.  The marshals had to process us into the system before being taken to our next destination, which was the airport.  This is where all the transfers take place.  Some inmates get on a plane and others onto a bus.  Buses come from different institutions to pick up prisoners and take them to where they've been sentenced.  Well, as things go, the plane broke down so we had no airlift.  When this happens the transfer buses (which I was waiting for) don't show up so the marshals had to take us all back to the County Jail.  Two inmates got off the van and stayed at the county jail because they were supposed to be on that the plane that broke down (now you know why they call it Con Air).

The next stop was the M.C.C. (Metropolitan Correctional Center) where we were placed on another van and taken to Brooklyn Metropolitan Detention Center where I stayed for about one week.  This place is set up like the county jail and if you've been following my "chronicles" you'll have an idea what that's like.  It's just a hold-over place until you leave for your transfer destination.  All the prisoners leaving that day are given paper suits made out of one piece with a zipper and they're see through. (I was allowed to wear a t-shirt and boxers under the suit).  Again I was belly-chained, handcuffed, and leg-shackled with the other prisoners and put on a bus-- much like the van-- with bars on the windows.  About an hour later I arrived at Fort Dix.

When I got off that bus and the sun hit my face it was something almost unexplainable!!!  I had not seen the sun in 18 months.  The best way to describe what I felt was to imagine the day you're born and come out of your mother's womb and open your eyes for the first time and see the world.  That's the best way I can describe the feeling I had coming off that bus, standing in the sun!

Here I am.  Writing to you from a room in Fort Dix; a room I'm sharing with 12 other people.  Fort Dix is a fully operational army base.  Part of the base was converted to a jail.  There are 5000 inmates here.  I really don't get any privacy because of the 12-man setup (the only thing I miss from county was my one man cell) and it does take a little getting used to.  But I'm a survivor.  I've had worse. The compound is big.  Every hour they have 10 minute moves - which mean you only have 10 minutes to get to wherever you wanna go.  Once that 10 minutes is up, you're stuck wherever you are for the next hour.  And, if you don't get to where you're going in time you're considered "out of bounds" and receive a "shot" (disciplinary report).  But enough about prison, this is RxMuscle.com not RxPrison .com.

Lucky me; we have weights here.  It's antique shit but its better than nothing.  We have 5 bench presses, three incline benches, 2 squat  racks, 2 preacher curls, 1 t-bar, 3 shoulder presses, 1 leg press, and assorted dumbbells.  Talk about old school and hard core - this is it!  There are 2,500 inmates in with me (on my side of the prison) and they're all trying to use what little equipment we have.  What a clusterfuck!  But somehow we all manage to get our workouts in.  After an 18 month lay off I was psyched to get my first few training sessions done.  It's just not the same.  For me, working out without the "gear" sucks.  You just don't get the same pump and you're not as motivated to train.  Let's not forget to mention that everything hurts, a lot.  All the injuries you have don't bother you when you are on the gear but they kill you when you're "off".  So, for now, I'm taking it easy and working my way back, little by little. I'm just trying to get my body used to the weights again.

This brings me to a question this month sent in by Patrick from Sydney, Australia.  Patrick wanted to know how you keep your gains after you come off a cycle?    Well Patrick, it's very hard and you have to expect to lose some size and strength when you come off (especially, cold turkey, the way I did it).  That's just the way it is.  The best thing you can do is EAT.  Keep your calories high so you can hold onto whatever muscle you put on.  When a bodybuilder comes off a cycle, that's supposed to be his clean out time.  Let me tell you, most pros really never have an off-cycle.  Personally, my idea of coming off a cycle just meant keeping my doses low.  I'm not recommending that anyone listen to me.  I'm just telling you what I did, personally.  To me, a 250mg shot of test every week can't hurt anyone.  If someone out there can prove me wrong then please by all means show me!  So if you're planning to come off a cycle completely or just want to keep your doses low until you're ready to turn up the heat again, make sure you EAT!  In bodybuilding, eating is everything.  You don't grow if you don't eat.  I can't stand people out there who think you get on the gear, get big, and that's it.  Anyone on this website surely knows it takes a lot more than that.  This love of ours takes a lot of dedication, consistency, energy and perseverance.  So to all my fellow Juiceheads out there, keep banging away!

I want to end this month by saying hello to Jim and May Davis of Glen Burnie, Md.  Jim just started taking his son Max to the gym.  I think that's such a cool father and son bonding experience.  Remember the name Max Davis, you very well just may see him upon the Olympia stage one day.  I love getting mail so if you'd like to drop me a line it's:

Gotta run, it's feeding time at the zoo and, in this place, I'm just another one of the animals.  Talk to you all next month.