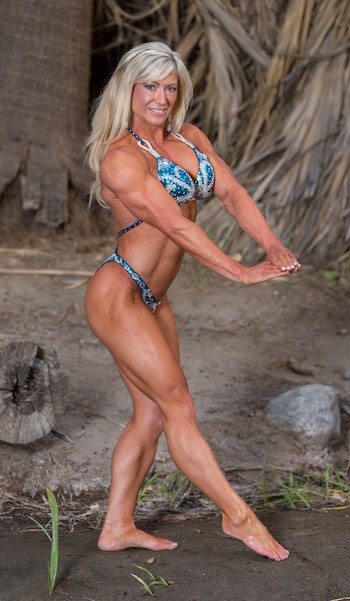 The worlds of bodybuilding and running may seem like total opposites. One is anaerobic, the other is aerobic. One emphasizes size and symmetry, the other speed and conservation of energy. One has a world-renowned figurehead in Arnold while non-runners would be hard pressed to name a mainstream runner in a non-Olympic year. However dissimilar the two worlds may seem, they actually have quite a bit in common. They both require an intense amount of dedication to diet and training. They both push the limits of body and mind. Perhaps most importantly, both sports force participants to trust the process and enjoy the journey. Erika Kikuchi, an Olympia bound IFBB pro physique competitor, straddles the line between the two worlds and shows that sometimes, great things can happen when worlds collide.

Erika is certainly enjoying the journey. Right after her first amateur physique show and overall win at the San Jose Championships, she earned her pro card at the USA Championships in 2015 after four years of cutting her teeth in figure. “I always felt that I wasn’t where I needed to be in figure. It never felt like home. I was never able to train how I wanted or push my limits.” Since making the move to physique, she is making a huge impact on the national scene, having turned heads by doing something almost unprecedented: winning her first-ever pro show at the Ferrigno Legacy last November, earning a slot in the 2016 Olympia. “It was one of the best moments of my life,” she remarks about receiving the famous Hulk trophy from Lou Ferrigno himself.

A self proclaimed “athlete at heart,” Erika balances running with bodybuilding as a way to achieve balance in her life. “It’s a duality of a performance-based sport and an artistic sport. As a runner, you tend to have very clear goals, a certain quantifiable time you are looking to beat or number of miles to run. As a bodybuilder, your achievements are aesthetic and more abstract.” Many think that bodybuilding and running are mutually exclusive, but Erika carefully alternates between the two in her training to great results. “It may be more difficult for men, but for women competitors, the combination can be golden.” While prepping for her first physique competition, she managed a marathon personal best. An avid racer who typically does more than 60 races a year (with a record of 104 races in one year!) of distances from 5k to 100 miles, she likes to do post bodybuilding competition races.  She did a nighttime trail race after the USAs in Las Vegas and she just did the Arnold Pump and Run at the Arnold Sports Festival, which involves running a 5k, and performing bench presses where each rep deducts time from the 5k. Physique prep definitely helped her with the Pump and Run as she did the max of 30 at 70% of her weight for the full deduction. “It helps to switch gears like that sometimes,” she says with a laugh.

Erikais a woman of many interests. In addition to bodybuilding and running, she has a demanding career as a corporate and securities attorney at a leading law firm in Silicon Valley. Her passion for fitness has a unique effect on her work life. “For me, talking about my interests actually helps with business development. I live in an area where most people are active, so it’s cool to be able to bond over fitness and maybe even answer some questions about how I train to build friendships with clients.” She does also mention some comical drawbacks. “Power lunches can be tough when it requires me to take the Tupperware out, and I try not to wear anything sleeveless!” Erika leads an intense life by any standards and she wouldn’t have it any other way. “I do like to perform at a high level with lots of variety. It really doesn’t stop, but I have a lot of fun with it.”

Prep is something Erika approaches with the same diligence and attention to detail as every other aspect of her life. “I’m analytical by nature, it’s what I do for a living. I don’t have much time for anything except work, working out and sleep, but I like to change it up and try new things when I can to break up the routine.” For instance, she will switch it between standard road races and mountainous trail races “to get a taste of the outdoors” in between training for bodybuilding, which requires a lot of hours inside the gym. “Bodybuilding,” she says, “allows me to tap into something totally different. It allows me to be feminine and beautiful . It’s artistic and allows me to feel in tune with my body. It allows me to show my personality and determination, something that I’m creating for myself.” She feels that physique training is “meditative in its focus” and truly allows her to push past her limits.

Peanut butter and jelly. Peanut butter and chocolate. Peanut butter and banana. There are many great pairings that don’t involve peanut butter, but if you are reading this you probably don’t want to hear about those. Before you go and break your diet, think about bodybuilding and running as a pairing that works. Think about Erika Kikuchi. She is a testament that diversity can actually benefit you as an athlete and person. She says, “You need to adapt and be flexible. Your competition history doesn’t matter. All that matters is that moment you are on stage.” If diversifying a routine is what it takes to achieve perfection in the moment, then maybe we should allow worlds to collide more often.

For more info about Erika, you can find her public Facebook page at Erika Kikuchi - Ifbb Pro Physique and IG @erikakikifbbpro.