Many of us try to 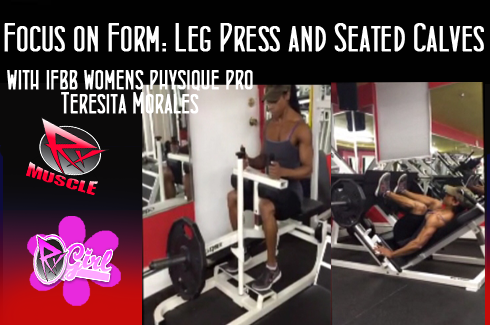 find different ways to conquer and improve our lower bodies. We look for techniques to target our weakest areas in the least amount of time in order for us to display the best physique possible. Isn’t that everybody’s goal? However, it’s these shortcuts that lead to improper form, ineffective techniques, possible injury and ultimately, minimal gains.

One common error made by many is the use of hands and arms during leg training. It’s fair to say I have seen some pretty unique leg exercises.. I recall seeing one guy at my gym who literally placed a yoga mat (or maybe two) under his thighs while doing the lying leg curl. I couldn’t help myself so I approached him and ask why? His reply, “I saw a bodybuilder doing it on bodybuilding.com.”

Websites provide useful examples of training routines and meal plans. I have learned a lot from reading articles online and in magazines. There are great tips out there for people who want to compete or for those who just wish to live a heathy lifestyle. Where most people go wrong is in the performance of these recommended workouts. A lot of folks train on their own and let’s face it, having a trainer who encourages improper form is a waste of your time and hard earned money.

There are many variations to leg training, however, hands and arms serve no purpose. In fact, the use of hands and arms during leg training decreases the use of your leg muscles by incorporating the upper body into the movement. Why have an arm or shoulder day when you’ve already worked them doing legs?

There are two exercises which I include during my leg training which most people tend to perform incorrectly. The seated calf raise and leg press are two commonly utilized techniques for overall leg growth. Done right and you will certainly see great results. Done incorrectly and you may very well be creating a recipe for disaster. Let’s take a look at each.

Almost every gym has one of these. They vary in terms of angle and platform width, however, they are easy to find and easy to use. If performed correctly, seated calf raises can be a critical method for calf growth and balance of the lower body. The most common error made by many during this exercise is using the hands and arms to help lift the weight. This may sound a bit confusing because the hands and arms are needed to begin and end this exercise. I certainly recommend that. However, once you have established your seat height and amount of poundage, your arms and hand should only be used to lift the weight plate off its hook and replace when finished. Your hands and arms should remain in a neutral position on your sides or on the hand rails provided by these machines.

Take a look at Video A. It shows me performing the seated calf raise using my hands and arms while performing my reps. If you take a closer look, you can see how my torso, bis and shoulders specifically, are being incorporated into this 5-rep set. It’s almost as if I’m performing biceps curls and shrugs at the same time. If you take an even closer look, you will notice that my hand and arm position is putting some strain on my neck and shoulder areas causing my head to move slightly forward. There is simply too much strain being placed on the upper body and not enough concentration on the calves. It has now become an upper torso movement rather than a calf exercise.

Video B shows me performing this exercise with my hands placed on both sides of my body, in a neutral position right on the padding. I am now able to take a more upright position while using only my calves to lift the weight. The hands and arms are only used to lift and return weight plate to its proper position.

The most widely used leg exercise, other than your basic squat, of course. Similar to the seated calf raise, nearly every gym has one of these with variations in its base and platform width. Not as user friendly as the calf raise but equally as critical for overall leg development. Vary your feet position a bit and you can target your quads, hamstrings and glutes.

For this exercise, the use of hands and arms is almost common practice. Nearly everyone does it. Does that make it acceptable? It shouldn’t. Effective? Certainly not. Because of the unique positioning of the body during this exercise, it creates no option but to use your legs to lower and lift the weight, its intended use, right? Despite this machine’s unique creation, with a base provided for back and head support, most still rely on their hands and arms to do the work for them.

I don’t think a day goes by where I don’t see someone pushing the weight up and down with their hands directly on their thighs. Video C shows just that. Again, you can see my arms being incorporated into the movement, actually acting as a lever to lift and lower the weight. Some people attempt to justify this mistake by saying they have knee issues or are using their hands as some sort of spotter. If that is the case, then you should consult your physician before performing this exercise. But if you are using your hands and arms to help lift the weight, then simply lower the weight, eliminate your arms and you will find that executing this exercise correctly is not as difficult as it seems.

Video D shows 4 different variations to proper hands and arms positioning. Try each during your next leg press day to determine which one suits your needs the most.

These simple suggestions can make a huge difference in the effectiveness of your leg training. Incorporate these two exercises correctly into your leg day and you will certainly start to see some great results! Good luck and train hard!!!

Discuss This Article on the RX Girl Forums