Growth Hormone: All You Ever Wanted to Know About It!

Growth Hormone: All You Ever Wanted to Know About It! 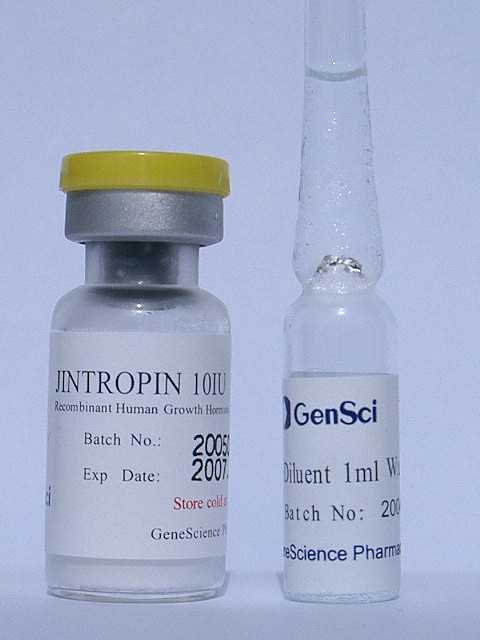 exclusive series of interviews with one of the head scientists at a major production laboratory.

So, first of all, why is Growth Hormone such an attractive drug to bodybuilders?

"HGH (and the IGF-1 that is a result of its use) is the only substance that can actually initiate hyperplasia. While the use of anabolic steroids can cause hypertrophy (the enlargement of existing muscle cells), steroids do not offer the ability to recruit and mature more muscle cells. HGH can. HGH also increases protein synthesis, which can be responsible for hypertrophy.

"You also have to understand that normally, after puberty, the body stops growing new muscle cells. The number of muscle cells is genetically fixed for the rest of the life span, and the most that can happen is to increase the size of these cells through weight training or steroids. However, by using HGH the body can actually grow new muscle cells. This allows the body to reverse genetic dispositions and achieve a desired muscle density."

For someone new to its use, what is a safe and effective starter dose?

"For gaining lean muscle and substantially improving body composition a dose of 4-8 i.u.'s a day will be necessary. Most people will respond very well at a dose of 4-5 i.u.'s per day. For maximum benefit in this regard, the addition of Testosterone, Insulin, and low dose T3 would be something to seriously consider.

"As a general rule the best way to start an HGH program is to start with a low dose and ease the administration into the higher doses. This will avoid, or at least minimize, many of the common side effects of HGH such as bloating, joint pain and swelling. Most people can tolerate approximately 2 i.u.'s with few side effects, so that would be the recommended starting dose. A scheduled program would look like this:

HGH is not administered like standard injectables, what is the injection procedure?

"HGH is dispensed in the form of a lyophilized powder. Any other form advertised is NOT true HGH. The only way to administer true HGH is by a sub-q or intramuscular injection.

Is there a best time of day for administration?

"The body produces HGH in a continuous pulsatile fashion throughout the day with the highest pulses occurring approximately 2-3 hours after going to bed and falling into deep sleep. Injectable HGH is completely absorbed and activates within approximately 3 hours. The strategy with respect to timing depends somewhat on age and other elements of the cycle. There is no single best strategy...it depends a lot on your individual situation."

Can you give us some examples?

"For those in their late 20's to early 50's, there is a chance that the endogenous production of HGH is still at a reasonable level. The best time to take an injection in this case would be early morning...after your body's own release of HGH in the night. If you get up to go to the bathroom in the early morning, this is probably the perfect time to take a couple of units of HGH. The second best time would be first thing in the morning when you wake up.

"If you are splitting your doses, it is good to take them when your cortisol levels are at a peak, which is when you wake up and in the early afternoon. Cortisol is very catabolic by nature and a well-timed HGH injection can go a long way to blunting this effect.

"Yet another strategy should be considered if one is using insulin with HGH. Insulin should be used immediately post work out. HGH and insulin do some great things together - they shuttle nutrients in a very complimentary way to each other - and the combination of HGH and insulin create the best environment for IGF-1 production. If one is using insulin immediately post workout, this would be a recommended time to take a number of units of HGH."

It has been claimed that lean body mass gains and fat loss are achieved with GH without and change being made to the diet, care to comment on this?

"A high protein diet is often recommended to help efforts to build muscle and lose fat. Adequate protein is required for building muscle and other tissues. Various sources advise people to consume anywhere from 0.6 to 1.5g of protein per pound of bodyweight per day."

How long does it take for results to kick in?

"It should be noted that for the vast majority of HGH users, results are not rapid and visible in nature. If your idea of using HGH is to get ripped in a few weeks , gaining 20lbs of muscle in a matter of a month or two, or being miraculously healed in a matter of a few injections...you are likely to be in for a BIG disappointment. HGH does some pretty incredible things, but it HAS to be viewed as a long term endeavor. A reasonable length HGH cycle would be 20-30 weeks in length. While you will always be able to find one or two individuals who will make great strides in a short amount of time, the majority need to be dedicated to its use for the long haul for it to be a worthy venture."

What effect does it have on the healing of damaged tissue that cannot be achieved by regular anabolics and why is this effect so profound?

"HGH has the ability to increase lean body mass, shorten a bodybuilder's recovery time between workouts, and improve overall athletic performance. HGH helps strengthen ligaments and joints, and promotes faster healing of damaged tissue. In addition, HGH can increase the body's capability for protein synthesis and for proper absorption of essential immune defensive molecules into the damaged site."

Some people use HGH to combat adrenal fatigue, could it also alleviate the symptoms of chronic fatigue syndrome?

"Adrenal fatigue is a term applied to a collection of non specific symptoms such as body aches, fatigue, nervousness, sleep disturbances and digestive problems. The term often shows up in popular health books and on alternative medicine web sites, but it isn't accepted medical diagnosis.

"The adrenal glands produce a variety of hormones that are essential to life. The medical term ‘adrenal insufficiency', or Addison's disease, refers to inadequate production of one or more of these hormones as a result of an underlying disease. Signs and symptoms of adrenal insufficiency include fatigue, body aches, unexplained weight loss, low blood pressure, light headedness and loss of body hair. Proponents of the adrenal fatigue diagnosis claim this is a mild form of adrenal insufficiency caused by chronic stress. The unproven theory behind adrenal fatigue is that your adrenal glands are unable to keep pace with the demands of perpetual fight-or-flight arousal. As a result, they can't produce quite enough of the hormones you need to feel good. Existing blood tests, according to this theory, aren't sensitive enough to detect such a small decline in adrenal function - but the body can. The latest research demonstrates that adrenal fatigue is connected to the growth hormone loop in a distinct way, since taking HGH releasers (consistently over many months) has helped to improve energy levels."

Finally, what is the best liquid to use when it comes to the reconstitution of HGH?

"Bacteriostatic Water (BW), Sterile Water or even liquid vitamin B12 can be used for reconstitution. What we choose to reconstitute it with should depend on how rapidly we use the GH. Bacteriostatic Water is basically sterile water with 0.9% Benzyl Alcohol added, and this alcohol keeps anything from growing in the water, thus making it safe for injection for the longest period of time...up to three weeks. For the common use for bodybuilding (2-5 i.u.'s a day) and the more commonly used vial size (10 i.u.'s) it isn't really critical which of the afore mentioned diluents are used...the vial will be used up long before bacteria or anything begins to grow in our reconstituted HGH."