Rx Muscle honcho Dave Palumbo is a cool guy as well as a man of action. When he got the idea to put on a Webcast of a women's roundtable TV show last summer, he didn't mess around. Before you could say Barbara Walters, "The Fitness View" was making its debut live from a Las Vegas hotel suite during Olympia Weekend. Happily, my long time contest-wrap partners, Carolyn Bryant and Nancy DiNino, and I got to be part of fitness-Webcast history, along with our two new friends, supplement maker Liz Gaspari and Nancy Noreman.

Palumbo describes the show as "a discussion of all topics pertaining to women—men, sex, diet, style and, of course, fitness!" In other words, it's the proverbial idea that's time has come.

"Women (and men) love to watch other women talk about what interests them—specifically, what they find to be the 'hot' or 'it' thing of the day," Palumbo continues. "Knowing that—and noticing the popularity of the celebrity show 'The View,' I knew that our fitness industry needed something like this that would be hosted by knowledgeable, fit, sexy women who could let all the opinions just pour out of their heads."

And pour they did. It was a wild, wooly, no-holds-barred free-for-all that had me hanging onto my wine glass for dear life. Topics ranged from the truth versus artistic license in the movie "Generation Iron," which had just opened, to tales of Craig Titus and Kelly Ryan—as she's up for parole this year—to everybody's secret crushes in the bodybuilding and fitness industry.

Oh, and sex was definitely discussed (Is Kai Greene gay? Did Carolyn ever go all the way with her old pal Ronnie Coleman? Did anyone know where the Gräfenberg spot is?), as well as relationships (Should Liz and her famous husband get back together?). There were guests to help stir the pot, including Toney Freeman and photographer-model Roneique Banks. I noticed Dave and the behind-the-scenes crew cracking up a lot, which I assumed was a good sign, but ya never know.

Said Palumbo, "Although it was a very raw, unprepared first episode, the numbers speak for themselves. We had more than 20,000 people watch the show and, when it was over, ask for more!"

More is on the way, pronto; in fact, we're getting a regular slot. "Starting Saturday, November 2, at 12:30 p.m. EST, 'The Fitness View' will be broadcast monthly only on RxMuscle.com," he said. It'll be live from New York, starring Carolyn Bryant, Nancy DiNino, Liz Gaspari, Nancy Noreman and RxMuscle regular Colleen Brennan, with special remote segments from yours truly on the West Coast.

Likely topics include power couples in the industry, the legalities of what you can say when a spouse is busted, rats and snitches (is there a theme here?), dealing with abusive relationships and the future of bikini. Also on the menu: Valentina Chepiga—my where-are-they-now interview with the 2000 Ms. Olympia; Dana Lynn Bailey—is she the biggest sensation since Monica Brant; and, of course, more sex-related topics. With jumping points like that, there's no telling where this conversation will leap to.

You won't want to miss it. Meanwhile, you can still catch the premiere episode here—if you dare: 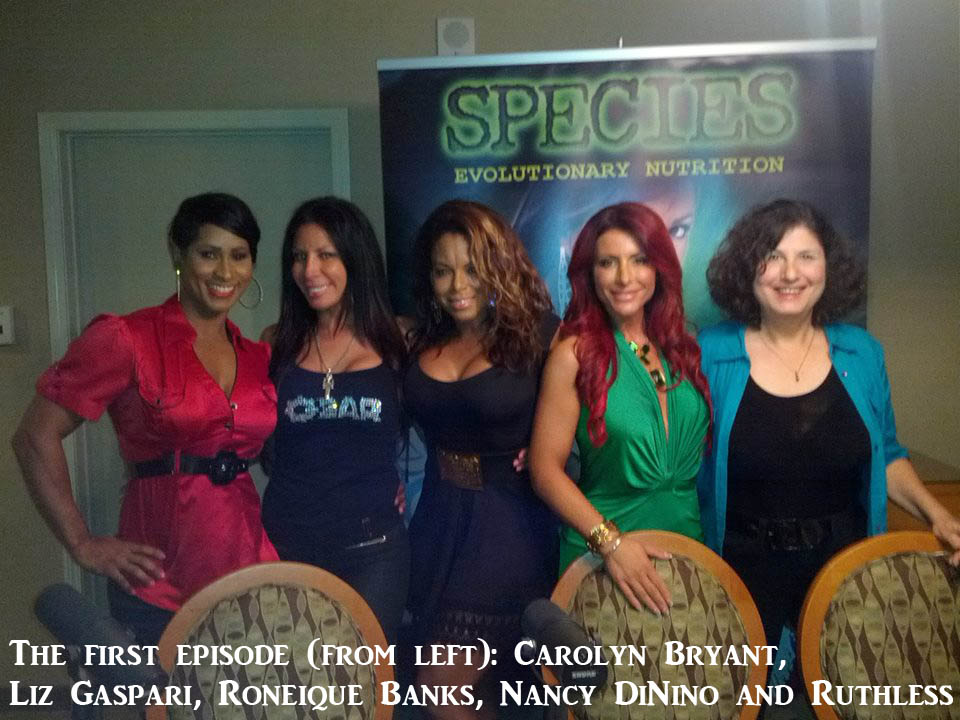 What Doesn't Stay in Vegas

Speaking of Olympia adventures, though it's been a whole month plus a day or two since the big season finale in Las Vegas, much has happened that still reverberates. High on the list was an encounter at the expo with two-time Fitness Olympia champ and fitness-camp superstar Jen Hendershott, who I'd last seen a year and a half earlier at the Arnold in 2012. Lots of life changes were happening for Jenhen, including the announcement that she was turning over her phenomenally successful Phat Camp franchise to another supernova, Nicole Wilkins.

A former teacher, Hendershott has been running the popular high-intensity weekends for women who want to be their best for 12 years. She and Nicole will put on the camps together in 2014—kind of a "pharewell" tour for Jen and an opportunity to teach her successor how it's done. Then, "in 2015, she's on her own." Hendershott, who's in her 40s (hard to believe), will continue to be involved in the business end of the operation.

One of the most creative performers ever to tumble across a fitness stage, Hendershott has combined that creativity with a head for business and promotion in a number of successful business efforts, including SixPackBags.com, a company that creates innovative travel gear, bags and luggage for athletes and fitness enthusiasts. In Wilkins, who reclaimed her Figure Olympia title from Erin Stern and fought off a challenge from ’13 Figure International winner Candice Keene that weekend, she sees someone who can "inspire and bring the next generation along."

Jen and Nicole have a lot in common besides multiple Olympia and International titles. They are both NPC promoters—of the Big Shott Classic in Charleston, South Carolina, and the Nicole Wilkins Classic held outside Detroit, respectively—they're both former gymnasts, and they're both terrific at inspiring women to improve themselves.

Having watched Nicole with the public and her many fans at numerous expos over the years, I'd have to say Jen's instincts are on the money as usual.

Everyone's favorite rising star at the O, in any sport, proved to be Alina Popa, the symmetrical Romanian-born bodybuilder whose praises are being sung even by folks who don't love women's bodybuilding. Popa, who had taken fourth a year earlier, landed in the runner-up spot, and some observers thought she was actually going to beat Iris Kyle. As one friendly judge suggested off the record, "Not this year, but she is definitely the future." I would agree, insofar as women's bodybuilding has a future (but that's a conversation for another time).

The 35-year-old Popa, who lived in Switzerland for a while, moved Stateside a couple of years ago and settled in Denver, where the bodybuilding-and-fitness community is particularly tight. When I ran into her at the Mr. O finals, Alina was hanging with a couple of the Mile High City's finest, ChaundraTangi and Laura Richards, a one-time fitness and figure competitor who now flexes in bodybuilding.

Am I the only one who thinks the 5' 3 1/2" Richards is a ringer for YaxeniOriquen, the former Ms. O who finished fourth behind, Kyle, Popa and Debi Laszewski this year? Maybe it was just the hat and the tight little-black dress and heels, but the resemblance couldn't hurt as Richards hits the stage in the heavyweight class at the NPC Nationals in a few weeks. 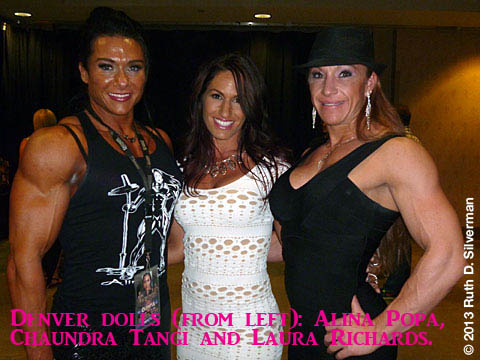 In addition to all the fun, the recent Olympia Weekend brought a number of bittersweet moments, conversations in which folks I care about revealed difficulties they were going through. One friend talked about his marital difficulties. Another's spouse was waiting for the call that her father had passed away. And on the bus to the expo, an athlete I have known for years revealed that, though one would never know it to look at her, she was fighting a nasty disease.

Normally, that's not something I'd be revealing here; however, the lady in question recently posted a video on YouTube in which she lays out the situation and exactly how she feels about it.

"I have lupus nephritis—I'm stage four with kidney disease," Sheilahe Brown declared on Facebook after posting the video, titled, "I Want to Live." "Stage five is NOT an option!"

Anyone who knows the Dallas flexer and noted muscle choreographer, knows she's got spunk. Brown started competing in 1984 and was a top-five-heavyweight for years—symmetrical and proportionate and a terrific poser but never really big enough for the growing sport of women's bodybuilding, pun intended.

All the while she was making a name for herself as a posing coach (Ronnie Coleman was her first client; Branch and Trish Warren, "my family," are among her current regulars) and maintaining a career in marketing at Delta Airlines, from which she retired a couple of years ago. Coming back to competition in Women's Physique in 2011, she earned her pro card with an overall win at the USA and last competed at the New York Pro in May. The health issues hit like the proverbial ton of bricks after that. It has changed her focus, certainly, but not diminished her drive and spirit.

Check it out and you, too, will be sending positive thoughts and energy to this amazing woman. 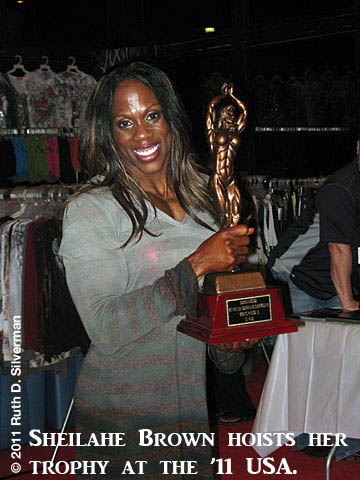