The ascension of Tanji Johnson to the head of the class 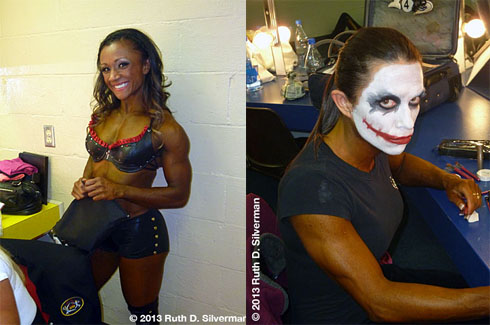 at the Fitness International on March 1 in Columbus, Ohio, set up a dramatic scenario for the Olympia that none of us could have imagined six months ago—or even five months ago, after Adela Garcia had won the Fitness O for the seventh time and then lost to Oksana Grishina two weeks later at the Arnold Europe. Despite the moaning from those in the seats—and the press pit—who expected it to be a clear victory for Grishina in Columbus, the reason it wasn't was all in the numbers. As it turns out, many observers, including my colleagues in the RxMuscle.com wrap-up video, Dave Palumbo and Aaron Singerman, did not know how the fitness scores work these days—the routine round counts double, so the total is one-third physique score and two-thirds (not three-fourths) routine. In this case, Tanji won the physique round and Oksana was fourth; Oksana won the routine round, but Tanji was second. With a full complement of judges and unanimous scores all around, the final tally came out 15-20 in Tanji's favor.

Oksana's routine, in which she portrayed the Joker, was off the charts in terms of creativity, skill and audience response—the main reason that folks didn't understand why she didn't win the show. Tanji, however, presented the best routine we've seen from her in several years, dispute a bobble or two. Plus, who wasn't pleased for the fitness veteran, who got her moment center stage with co-promoter Arnold Schwarzenegger after 10 trips to the Fitness I and four previous top-five finishes?

Of course, at the Olympia, with Adela in the picture, the numbers will change. For one thing, she's likely to beat Tanji in the physique round. For another, she'll be in the mix in the routines, although she acknowledged that Grishina has taken the art to a "whole new level.… She inspired me," said Garcia, who, although she didn't compete, was to be found at the expo, in her usual spot at the GNC booth, during the weekend. It's about "acting a character, not just doing tricks and dancing."

Adela was so fired up after watching her friend and rival's performance, she said she'd be going back to Texas and starting on her Olympia routine right away.
Well, I'm fired up about having a real showdown at the Fitness Olympia come September. And that's no joker.

Speaking of real showdowns, those who assumed that reigning c

hamp Nicole Wilkins's decision to sit out the Figure International this year meant an automatic win for _reigning Olympia champ Erin Stern got a real shocker when Candice Keene took the title in Columbus and Stern finished third behind runner-up Heather Dees. Just to make sure we got the point, Keene repeated that feat a week later at the Australian Grand Prix, leaving two-time Down Under champ Stern in second åby a single point.

I guess my question of whether Candice was the new Heather French, destined forever to come in third at the big shows, has been answered.
Back at the Columbus Hilton after the Arnold Classic finals on Saturday night, Candice was exuberant.

"I knew I was going to win," declared the new champ, who was drinking something with Jagermeister in it that someone had given her—not her usual hydration fluid. Lest a chuckling reporter think that it was just the adrenalin talking, she explained. First of all, the figure competition, which had taken place the night before, had occurred on her 31st birthday. "My competitor number at the Olympia was 13," she said. "Then, when the show was going to be on 3/1/13—on my 31st birthday—I knew!"

Stern, who has neve

r won in Columbus and seems to have a problem looking her best there, suffered a disappointing loss to Wilkins in 2012 (before beating her at the Olympia). Backstage at the Veterans she suggested that it was the last time she'd do the show, but I'm not holding her to it. Meanwhile, Keene's oh-so-keen victory in figure, like Tanji's win in fitness, set up another impending Olympia showdown for us to speculate about. Let the punditry begin.

Speaking of women who give great fitness routine, another veteran of the Veterans Memorial Auditorium stage, retired New Jersey tumbler Stacy Simons McDowell, wrote to say that she'd be competing in women's physique this year, doing the first three shows.

"The insane reason for this is that my third show, which will be the New York Pro, will put me at 50 pro shows!" said McDowell, a former gymnast who earned her pro card at the ’97 NPC Fitness Nationals and has competed in seven Fitness Internationals and 10 Olympias. Known for her amazing double-jointed elasticity and her hourglass figure, she was an interesting recruit for physique when she dipped her pointed toe into the waters last year, getting fifth at the Los Angeles Grand Prix, which will be her first show in 2013, and 10th at the New York Pro.
It's as good a reason as any for getting back onstage, Stacy. The big 5-O? You sure don't look it.

Retiring (but Not Shy) Types 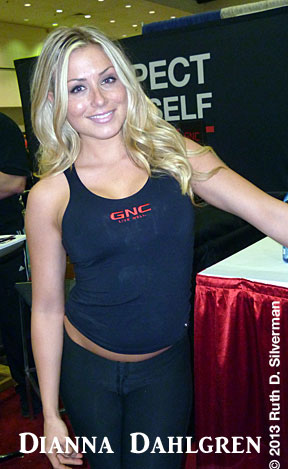 ek or so. First, it was Dianna Dahlgren, announcing via a press release from Fitness Management Group on March 14 that she was "hanging up her bikini to move on to other ventures, including her multiyear contract as Ms. Supercross and mainstream modeling." Dahlgren, who makes her living as a mainstream spokesmodel, passed on the competitions in Columbus because, as she told me at the FitExpo in January, "I'm always booked that weekend." So her move is not all that surprising.

Diana won three pro bikini competitions, including her last show, the _12 Houston Pro, and has finished as high as third in the Olympia in 2011 (she was fourth last year). She continues to co-host the "Muscle Girls Inc." radio show with Cristina Liberatore here at RxMuscle.com.

Rising star Marcella Tribin, the first IFBB bikini pro from Colombia, was next to go, announcing on March 17 that she'd be giving up competition due to work and family responsibilities. The resident of Bogota, who is a dentist and mother of 13-year-old twins, has notched several top-five finishes since turning pro a year or so ago and made it to the Olympia on points in 2012.

Her last competition was the ’13 Bikini International.