Up Close and Personal with Transgender Gloria Pisciotta!

Up Close and Personal with Transgender Gloria Pisciotta!

As it happens, I did not have to wait too long for the ideal candidate to come along (and thanks to 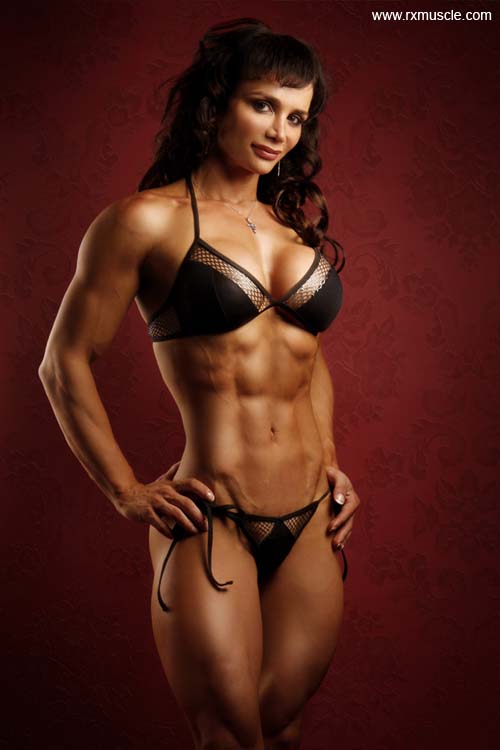 Sister Steel for connecting us). When Gloria Pisciotta appeared on ‘Muscle Girls Inc' it was clear that she had a major story to tell re her transformation. So I decided to ask her for a follow up interview where we would pick up on some of the subjects talked about by Colette and Krissy and add a few more topics to the mix.

Thankfully, Gloria was more than willing to fully open up and the results are a very educational and eye opening interview that will hopefully leave you thinking what a courageous and inspiring individual Gloria truly is. In a world where prejudice and judgment still lurk in the shadows trying to influence the course of our life, Gloria has separated herself from the ‘herd mentality' by claiming her true gender and not accepting the one designated at birth. So, having said all that, let's go back to the original question presented at the beginning of the Muscle Girls Inc radio interview, and delve a little deeper....

You said that when you were 5 years old your parents and family doctor decided you were transgender and began implementing a plan for your long-term future. Now, I can't help thinking that your parents must have been very open-minded; I mean not too many parents would surrender so easily to this concept. Care to elaborate?

"Firstly, no-one ‘decided' anything...I am what I am through a fusion of male and female chromosomes during the latter fetal development whilst in my mother's womb. All babies, regardless of whether they are xy (boy) or xx (girl) fetuses, start out by default as female. However, around the six week mark, the xy (boy) fetus will release a large amount of male hormones and start transforming that female body into a male one. This does not happen in one shot, but over several discrete stages all the way through the twelve-week mark. However, in transsexual fetuses the final transition phase does not occur, leaving their now male boy with the original female brain. Therefore, it is not about my parents being open- minded; they love me and understand me and, with the guidance of specialist medical professionals, identified very early on my true gender."

Can you go back in time and recall how it felt to be that 5 year old undergoing all this emotional conflict related to your gender?

"My behavior from the beginning was feminine in every way. In fact, during my early childhood people would constantly comment to my mother about what a beautiful little girl she had. Like any little girl I hated it if my hair was cut too short or if my clothes were ‘tom boyish' in any way. I was always very conscious of my body. For example, the very idea of taking my T- shirt off at the beach (even as a small child) was terrifying and a ‘no-go' due to the fact that I did not have any breasts."

When you were on Muscle Girls Inc you said that you did not remember your original birth name...is that because you choose not to acknowledge that part of your life?   Forgive me, but I find it hard to believe that you would simply forget such a thing?

"I can understand why you think that way Leigh, but I have never associated with my male birth name

because that wasn't me and, quite frankly, I have never understood people's compulsion to want to know!"

You started hormone treatment at age 13 and stopped at age 20, claiming that the hormones messed with both your mind and your sex drive. Now, I am just guessing here, but surely some of the secondary male sexual characteristics (e.g. body hair, voice change) would start to re-appear as your hormone system started to return to what it considered ‘normal'...did you notice any changes?

"In absolutely no way whatsoever! Otherwise I would have gone straight back on female hormone therapy. However, I feel the fact that being prescribed feminizing hormones when I was 13 years old helped tremendously.

"My decision to stop for a while was purely for health reasons due to the side effects associated with any hormone with regard to liver toxicity and long term health. Of course I did not expect to stop for a decade; it just turned out that way. The status quo for most TS girls would be to take female hormones for the rest of their life; but I was lucky enough that nothing changed."

You had your first breast augmentation at 15, followed by another one at 19...why the second surgery?

Have you had any other cosmetic surgery?

"I had a rhinoplasty since I was not happy with my profile and I have had my lips enhanced." 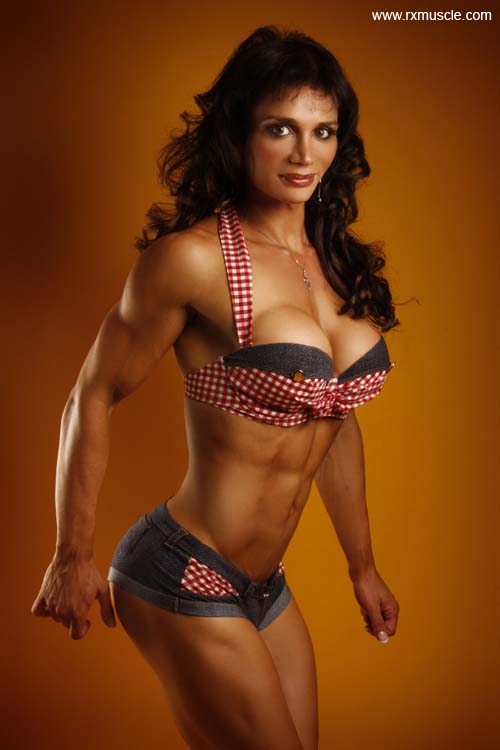 "I want to educate your readers to the fact that being transgender does not mean that you are automatically homosexual. There are many male to female transgender who date women, likewise female to male who date men. Sexuality and gender are two different issues!

"There is a lot of confusion and prejudice out there over what it means to be a transgender person...so let me break it down for your readers:

a) Those who were born with the genetic heritage in which they carry chromosomes from both male (xy) and female (xx) experience absolutely no confusion as to their true gender identity. This has been scientifically proven.

b) On the other hand, those who are simply confused go to places like Thailand where there is no vetting process in place to identify suitability for re-assignment surgery. They often realize their mistake on getting surgery and end up suicidal."

Having said this, would you ever date a woman?

"Absolutely not! I have never been intimate with a woman nor had any sexual interest in one whatsoever as that would make me a lesbian. I am only attracted to straight men."

You have said that your boyfriend will not have a ‘full' relationship with you until you have complete re-assignment surgery. How does this make you feel?

"To be honest with you Leigh, I wouldn't have it any other way. We dated for a short time in the beginning but now he is my best friend and he is a very cool guy...not to mention one heck of a trainer! I fully understand that he is not interested in intimacy with me due to my male genitals and I think that is understandable from the point of view of a regular straight guy."

There are men who are not put off by this though; in fact you do have a highly profitable escort service in London. Exactly what do you offer as part of this service?

"My clients are very successful, intelligent, adventurous business guys. They like to take me out to dinner. That is all!"

Do you have any thoughts about the sexuality of men who seek transgender women who have not had full surgery and still have male genitalia?"

Turning to bodybuilding...you plan to compete in the figure section of bodybuilding shows. What drew you to the idea of competing?

"I aim to sculpt the best possible body. I am aiming for perfection if you like. This brings me to a great quote from my best friend Craig who once told me, ‘Perfection is not attainable, but if we chase perfection we can catch excellence.'

"Like any athlete, how can I truly achieve excellence unless I am prepared to go up against like-minded women in pursuit of the same thing?"

What about women who may accuse you of having an unfair hormonal advantage?

"In regard to me competing, I might understand their case for objection if I were to enter into the physique category. Then again, with all the obvious steroid use I am not sure how! In fact, in the figure class it might be 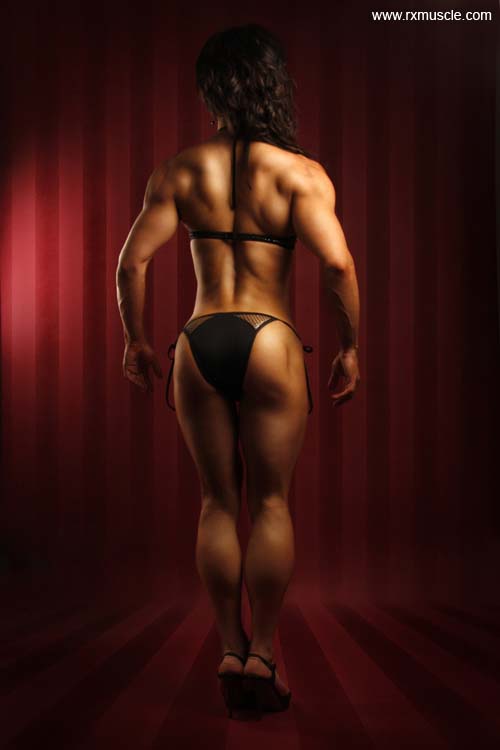 considered that I had a distinct disadvantage. I mean, there is no way a man can have the proportions of Monica Brant, I don't care how much of an ectomorph he is!

"So to any of you figure girls out there who still doubt me and believe I have an unfair advantage or think I don't need to train hard, you are more than welcome to come over to London and experience one of my workouts first hand."

So what are your plans for the future? Do you intend to stay in the escort business or branch out and explore the possibilities that may exist in the bodybuilding world?

"Escorting and more recently muscle worship sessions have always been a means to an end, but you better believe that after my re-assignment surgery is complete, working with Craig, I intend to bring my A game in pursuit of an IFBB pro card! I want to compete against women such as the amazing Gina Aliotti (a fellow Italian) the beautiful Zivile Raudoniene and of course the legendary Monica Brant. In addition I would love to appear in major magazines and share my experience and insights. Also work as a sponsored athlete with a top supplement company and inspire other women, letting them know that whatever obstacles life puts in your way, if you stay true to yourself and follow your dreams anything is possible!"

N.B. You can contact Gloria directly at [email protected]