Many proponents of cleanses and detoxes state that they can completely eradicate a myriad of ailments, and that they should be done as regularly as one tunes up a car. I know most of you are probably thinking that a cleanse is probably not going to do much, since you already eat clean. What about a detox plan? Isn’t that the same as a cleanse? Actually, there is a distinction between a cleanse and a detox, but that distinction has gotten muddled due to the fact that the two terms, cleanse and detox, are often and inaccurately used interchangeably. 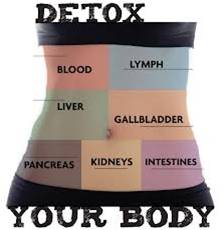 se supports the body’s detoxification organs such as the liver, colon and kidneys, but does not directly detoxify the body, while a detox targets specific substances such as pesticides, alcohol, or medication and eradicates them. You can think of a cleanse as a flushing and scrubbing of the digestive tract. It is accomplished via clean foods, herbal supplements or teas which make the body more efficient at removing toxins. Part of a typical cleanse involves eliminating foods that are allergenic or irritating to the colon, such as gluten, soy, dairy, sugar, processed foods, alcohol, and coffee.

In contrast, a detox results in the release of toxins stored in fat cells which are then eliminated primarily via the liver. It also incorporates elimination of certain foods and herbal supplements, as well as saunas or infrared wraps to sweat toxins out through the skin. The general recommendation is to use a detoxification system at least once a year to rid the body of accumulated environmental and metabolic toxins. For those of you who compete and who practice clean eating most of the time, I honestly believe a detox will give you much better results than doing a cleanse.

Be prepared for a much more intense experience with a detox than with a standard cleanse. Why? Because detoxes cause the release of stored substances at the cellular level, while a cleanse is more of a colon detailing. You may want to consider doing a full detox if you are experiencing hormonal issues, weight gain, fat gain, acne flare-ups, eczema, rosacea, muscle aches, joint aches, constipation, anxiety, depression, fatigue, or sensitivity to foods you might not have been sensitive to before. Be prepared for some unpleasant side effects as the toxins are released into your bloodstream, such as malaise, fatigue, rashes, nausea, constipation, hunger, bad breath or insomnia. This should be a clear signal to you of how nasty all those accumulated toxins are!

You might want to consider doing a detox right after your contest season is over, or if your body is becoming resistant to the constant manipulation that contest prep often demands. Perhaps you can’t lean out for the stage like you used to, or you have belly issues with foods you were able to tolerate before. Probably the trickiest aspect for competitors to doing a detox is figuring out the best time to do one. It can be next to impossible for those who compete year round or who constantly have photo shoots or events to carve out time for this involved process. Detoxes typically require a week or more to exert their beneficial effects on the body. Another issue is that if you are doing a colon cleanse with herbal remedies, you need to be in close proximity of the restroom during that time. If you’re short on time, you may opt to do a cleanse instead of a full body detox, but I still recommend the detox option for competitors to set them back on track and optimize their performance and contest prep efforts.