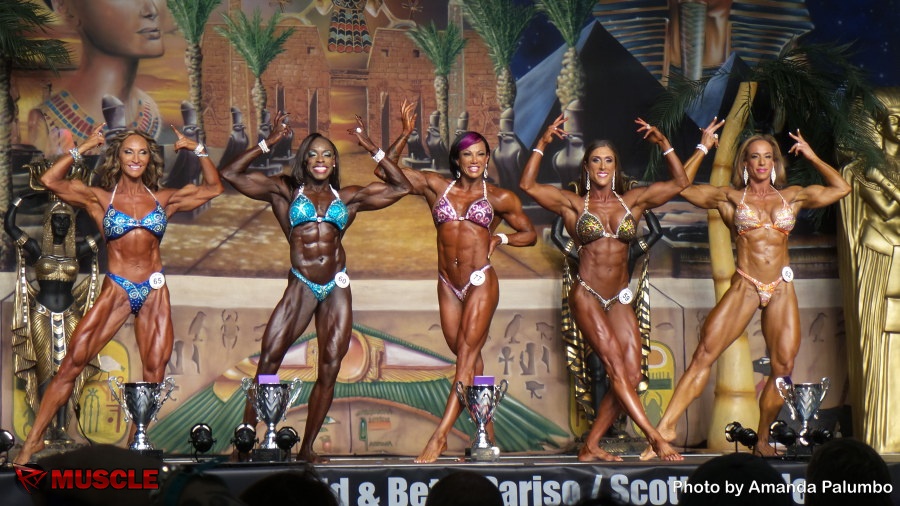 Promoters Ed and Betty Pariso along with Scott Templeton staged the third of their four big national Europa Expo events, this time in Atlantic City, New Jersey, just a stone's throw from the iconic Boardwalk.  With the huge Expo and the pro bodybuilding events being held at the Atlantic City Convention Center on the weekend of August 28th and 29th, it was significant to the pro division competitors as it was the final qualifier before the Olympia Weekend in September. With the Texas Pro held in San Antonio, Texas, just a week earlier, many of that field were holdovers and chose to take a final shot at a coveted Olympia spot.  This Europa event drew a contingent of 24 contestants, several of whom were also bidding to gain additional points in the Olympia Qualification Points Series.  Prize money available to the Women's Physique Division totaled $4,000, with $2,000 going to the winner.

It Was All About Soto in Atlantic City! 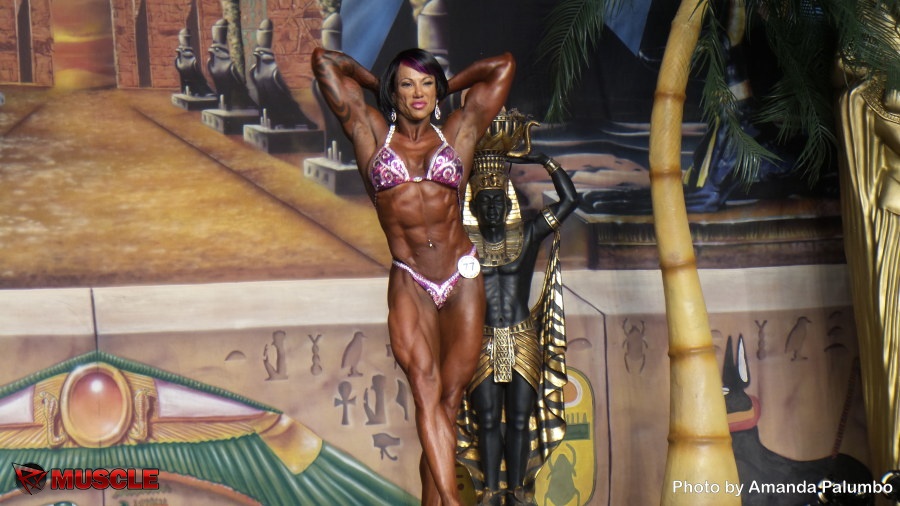 The sports world is plentiful with stories of triumph through adversity, and although they may not be a rarity, when they do come along they are almost always accompanied by a 'feel good' scenario. And so it was on this weekend in Atlantic City with the Women's Physique Division stampeding to the finish of the event that would offer a final qualifying spot to the Physique Olympia.  The Europa Expo Pro was the 19th and final contest for a winning competitor to punch a ticket to Las Vegas.  And who better to emerge as that final winner than a seasoned veteran of pro Physique Division events - Mikaila Soto. With the coming of the Pro Physique Division in 2012, there was no more enthusiastic entrant than Soto as she entered an eye-popping seven contests.  Her inaugural year was a rollercoaster experience placing second on two occasions and as far down the list as 19th at another event. The 2013 season saw her enter four more contests, and the results were far more favorable as her higher placings found her qualifying for the first-ever Physique Olympia where she placed 11th.  Fortunes turned in another direction in 2014 as health issues and extensive medical treatment - that included considerable hospital time - curtailed her desire to compete at all last year. Undeterred, Soto began the road back - a road that no doubt challenged her will - and with the coming of 2015 she returned to the stage at the Puerto Rican Pro on May 30th.  She finished 10th, but the 'Rebel' was only getting started.  With a pair of 5th-place finishes at the Chicago Pro and Tampa Pro events in early July and early August, Soto soared to a runner-up spot at the Texas Pro in San Antonio on August 22.  And with no rest for the weary, she made her way to Atlantic City to score her first-ever pro Physique Division Open victory on her 16th try.  It was indeed, a Sweet 16th!  Clearly, and with no other competitor in the conversation, Mikaila Soto can be considered the 'Comeback Athlete of the Year'.  Next, and with only three weeks rest (do you really think she'll be resting?) the Physique Olympia contest is waiting for her in Las Vegas on September 19th.  Almost as an afterthought Soto accepted a check for $2,000 as the winner's purse. 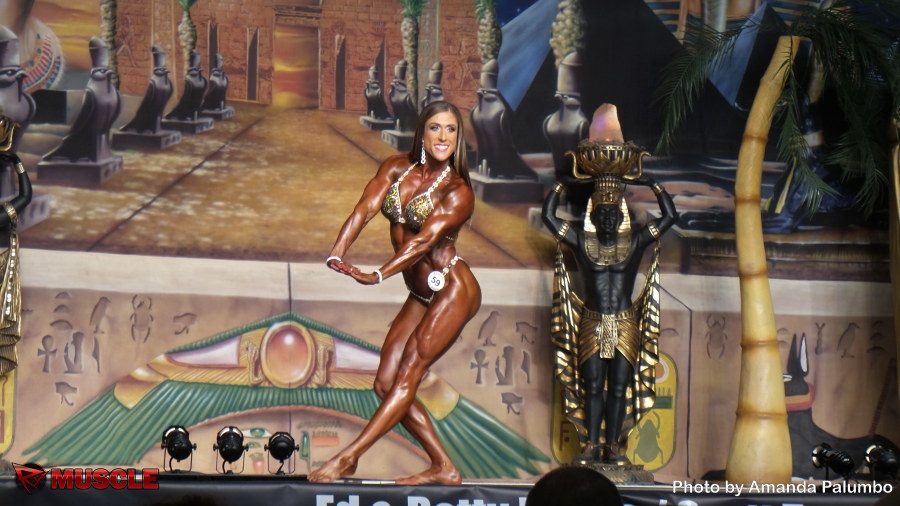 Fresh from winning the overall NPC USA Physique Division crown in late July, Billie Cavalier made a strong impression on the Atlantic City judging panel in her pro debut.  From Denver, Colorado, showed clean flowing bodylines and sleek muscle shapes that helped her stand out in the big field of 24.  Comparatively, her rise to the pro level and earning a runner-up finish in her first pro event can be considered meteoric considering this event was only her third contest.  In November 2014, Cavalier entered and won the NPC Rocky Mountain Championships in Colorado, which paved the way for her entry in the USA Championships this year.  So, with a check for $1,000 in hand for her second-place finish, her future contest selections - which might conceivably include the Mile High Pro in her own backyard - will be interesting to watch with the coming of 2016. So with Mikaila Soto serving as the veteran performer of the pro Physique Division by way of her entries since 2012, then third-place finisher Roxanne Edwards was the veteran competitor of the entire field when it comes to longevity. 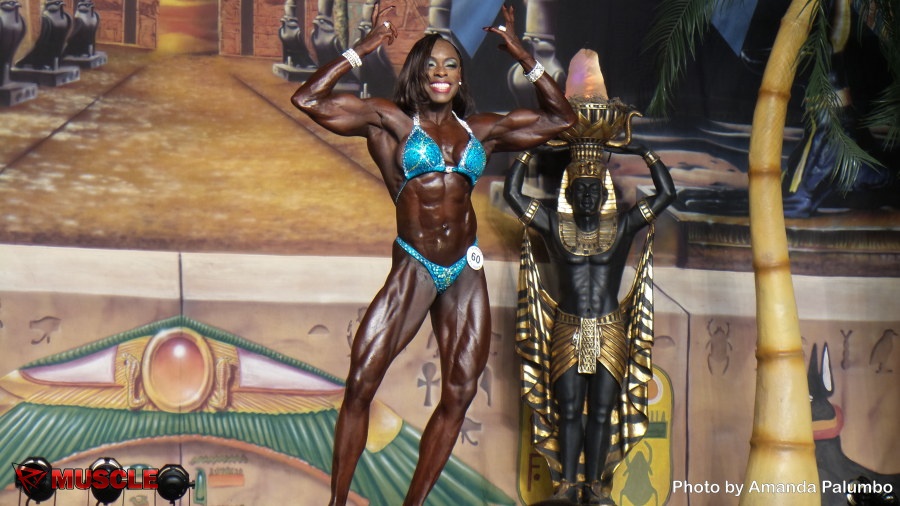 Competing since the mid-late 90's, Edwards has competed on the national bodybuilding scene since 1997. Annually since 2000 Edwards has faithfully entered events and finally earned IFBB pro status in 2011 with a victory in the light-heavyweight class at the NPC Nationals. As a pro, her journey has been a difficult one, never breaking into the top ten since 2012 with the exception of a sixth-place Masters finish at the Tampa Pro earlier this year.  Her third-place finish here is by far her best pro result in an Open event and with $500 in prize money and a top three finish she was understandably sky high on the joyous scale. By the final point tallies she was a unanimous choice for the third placement.  Truth be known, Edwards was in spot-on condition here and has improved steadily over the past year.  After the contest she was heard to say she was hoping to win a Physique Division contest someday.  With renewed motivation, she's probably already looking forward to the contest schedule for 2016.

Credit to Amanda Palumbo for her translation assistance in the creation of this article.
For complete photos and results check out RXMuscle.com