The Truth About Coaching and a Look Inside the Fitness Industry

The Truth About Coaching and a Look Inside the Fitness Industry 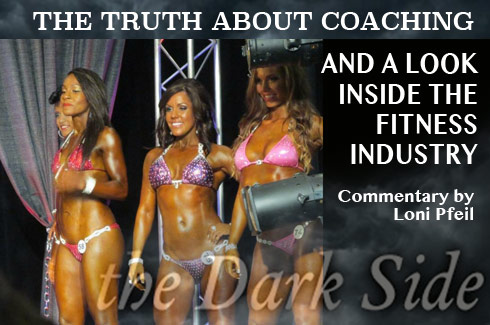 Hopefully the title of this article got some attention. I want to start by saying that what I am about to discuss does not go for ALL prep coaches in the industry, I would simply like to shed some light on the dark side of the industry. I personally don't feel that it is not talked about enough. The coaching industry can be a very positive thing and then also a very negative thing and the negative part is what people don't hear enough about. A lot of people really have no clue what can actually happen to competitors when they put themselves in the hands of these prep coaches. Yes we do compete in an extreme sport but, it can be done safely, I promise! In this article I am going to take you a behind the scenes and show you what can in fact happen if things are done in an un-safe or improper manner. I have interviewed several athletes and will be releasing their statements in this article for the safety of other competitors. I hope to raise awareness for this never ending issue.

Over the course of the last few weeks I have spoken to several competitors and they were willing to share their stories with me, some wish to remain anonymous and some not. The following are some questions I asked them followed by their answered quote on quote. The competitors that did not wish to remain anonymous I have included their social media links so you can find them and follow them on their amazing journeys as well as being able to see their lives after each of their coaching nightmares. I want to reiterate that NOT ALL coaches are bad but, there is too many out there that should not be in charge of anyones health, period. When you hire a coach, you place your health in their hands and I am here to tell you that it can be fatal or it can be a very positive life changing experience. In my opinion there is way more bad out there than good!

Please keep in mind that all of these competitors have since moved on, for the most part, and have recovered or are still recovering. The first question I asked was, "What was the end result of working with your previous prep coach?" Competitor number one who wishes to remain anonymous says, "I did what I was told by my coach because I thought that was the way it was suppose to be." "My weight had gotten the lowest it had ever been but, the rebound after was much worse from the extreme low carbohydrates, the extreme amount of cardio, water and sodium depletion, and diuretics my body was less than happy with me." "Post show resulted in cravings, over indulgences, weight gain and physical exhaustion."  Then I asked all the ladies for some words of advice for other competitors working with coaches or looking for one. The same competitor said the following: "Do your research, talk to other competitors and most importantly take your time." "Just because someone has an IFBB Pro title does not mean they are an expert and have your health as a priority."

Competitor number two Shawna did not wish to remain anonymous she wants to be heard for the sake of other competitors. When I asked her the same questions her answers were....  "I felt lost really" she says, after working with her last prep coach. "I was given no direction on diet, supplements, or anything and I gained almost 30lbs within a matter of two weeks." After her competition. She counted on her coach to be there like promised to help her after competing and the coach was not there for her at all. The worst part about the whole experience was the mental destruction it put it her through. "He (the coach) would come onto me so frequently that I had to distance myself from him and only contact him for evaluations." He put her on tons of supplements and gave her dosages strong enough for a man but, she did what she was told because that was her "coach." Shawna's advice to all new competitors looking to hire a coach is,"Do your homework on that person." She also says to ask a lot of questions and get references a lot of them! "Not all coaches are out for your best interest." You can find Shawna Beaulieu on Twitter and Instagram @ShawnaLeigh81 also on Facebook to check in with her now and see how she is doing. She has an amazing journey to follow!

Competitor number 3 Jade did not wish to remain anonymous either, she wishes to be heard as well. Jade says,"Seeing the coaches with an IFBB title was my selling point for their coaching." These coaches were very pushy so she began doing what they said to do, long hours of cardio with eating very little food. "I would get very tired and unable to finish my cardio or workouts." She thought this was how the process to get show ready was suppose to go. The end result of working with these coaches was pure exhaustion and health issues. The worst part of this experience was that they began cutting her food back more and more and she became ill. "I had blackout spells, hair loss, skin dulling, and stayed constantly sick." This coach convinced her that all her health problems were due to a gluten and lactose intolerance. She was never helped with anything post competition or any kind of proper nutrition. Jades advice to anyone looking to hire a prep coach is to,"DO YOUR RESEARCH!" Ask around and make sure that the coaches you are looking into are reputable and have credentials. You can check follow Jades amazing motivational journey on instagram, twitter, and facebook @jade_bagwell Instagram @JadeBagwell Twitter Jade Bagwell facebook.

The last competitor that I am working into this article did wish to remain anonymous. The end result of working with her last prep coach was weight gain when she ate anything over 1200 calories a day, hormonal imbalances, a shot thyroid, taxed out adrenals and major self loathing. She had been doing over 1 hour of cardio daily for a long period of time. At first the coach didn't believe what she saying and when he finally did it was too late and had no clue how to reverse the damage that was done. What this competitor learned from this experience is "You really have to be careful who you trust to train you and coach you." She says, being caught up in the moment that it is easy to overlook things like your health and safety because you want to win and do well. Her advice to everyone is "Look at the meal plans and at how the coach thinks about food." "Pay attention to the extremes that they are willing to go to."

She continues to say, "If your calories become lower each competition and you are living on under 1400 calories while doing lots of cardio then you need to re-think about who is coaching you." Her symptoms were as follow: "I was feeling fried all the time trudging through my workouts and I had a harder time losing weight each time I competed." This competitor as well as the others mentioned are all doing much better now and have chosen safer healthier paths. Some of us competitors have had to learn the hard way (myself included) but, through our experiences we can help shed light on things for those who don't know that this kind of stuff does in fact happen in the fitness industry.

Over the course of the past three years since I have been back involved in the fitness industry and the world of competing I have learned a lot. I think one of the main things to look for like Jade said, is that just because someone has a title behind their name does not mean they are able to safely coach you or that they are reputable. Always make sure they have proper credentials, ask as many questions as possible, and most importantly take your time when looking for a coach. Follow them for awhile and see how they work and the outcome of those things. If possible Follow their clients, watch interact and pay attention to what the client has to say, that will tell you pretty much all you need to know. Hiring a coach is almost like hiring a doctor because your health is involved. Be smart, choose wisely, and remember this is a life decision you are making.

Over the course of this past year I have had so many damaged competitors contact me, that I started doing referrals for them, so they could get the help that they needed. I then decided to raise more awareness for this issue in hopes to bring more attention to it. I feel good about the amount that I have helped thus far and I will continue to do so. If you are reading this article I am going to ask that you share it on be-half of helping out the fitness industry and raising more awareness on this subject. My hope is that we can continue to shed more light on this issue and save the lives of competitors from being destroyed.