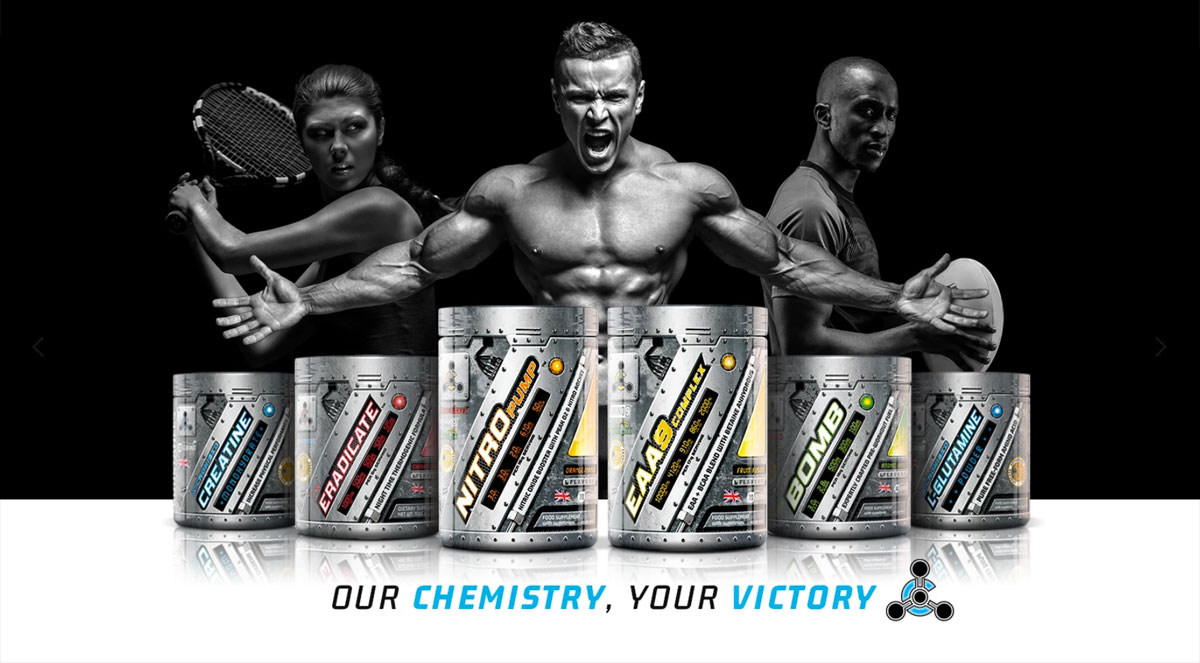 Last week, I told the story of how I met Paul Gardiner, the owner and creator of Muscletech. This week I want to finish up the story because it only gets better.  So, let's start off this tale with the end of the 96 Arnold Weekend.

Once my wife, Paul, his buddies, and I made it back safe and sound from Columbus, I set my focus on my run for the Canadian Nationals.  Paul, on the other hand, went back to work on developing his supplement line. It was 6 months until the show and I had already started dieting strictly. I was extremely motivated to prove to myself and the world that I wasn't all hype. By that point, I had appeared in Musclemag numerous times and was being associated with Muscletech products so I didn't want to let Paul or myself down and appear onstage at anything less than my best. Paul was very supportive during this process and regularly checked in on me. I would pose, routinely, during my prep for him.  Bob Kennedy and Gino Edwards (Johnny Fitness) even took a look at me a few times 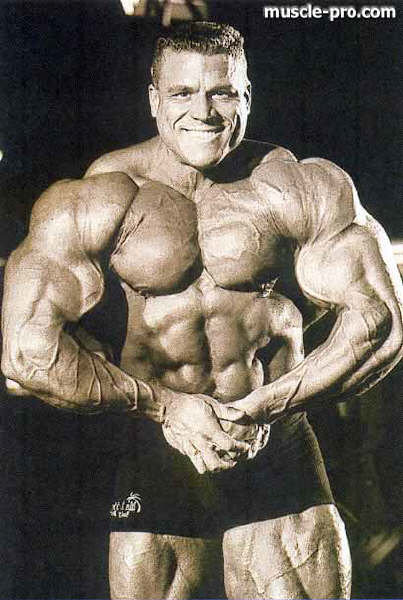 to make sure I was on track. Little did I know at the time but Paul was banking heavily on the hopes I would come through at my show and earn my IFBB Pro Card. More on this later.

Well as u all know, I peaked for the first and consequently only time in my career at the Canadian Nationals and won in convincing fashion. After the show, I flew to California to do a few photoshoots with Weider and Musclemag. What an exciting time. My first photo shoot was with Chris Lund from FLEX magazine. He worked my butt off but it was a great photoshoot.  He told me Ii was the first bodybuilder to ever use the 200 pound dumbbells in contest shape for dumbbell presses.  In fact he was so impressed with me that he called Joe Welder from the gym and told him about me and set up a meeting for me to see Joe at his Woodland Hills offices. More on this later.

The rest of the week I did photoshoots for Muscle Mag. I also did a lot of product shots with the Muscletech line so I knew Paul was up to something. He still never mentioned signing me to a contract though. After my photoshoots I stopped by MET-RX headquarters. At the time they wanted to meet with me. It was there that I was offered my first contract. Nothing detailed but the talks were starting and I even met with Dr. Scott Connelly. They were definitely showing some interest.

The next day was very exciting for me. I was gonna get to meet the legendary Joe Weider. I met Joe, for the first time, in his office and we chatted for a long time. He was very impressed with me and he had me pose for him in his office. Right there and then he offered me a contract and wanted me to be part of the Weider team. At that time Weider was the only game in town as far as contracts went. Met-Rx had a few athletes but Weider had the monopoly on all the big names so being offered a contract right after earning my pro card was a huge honor. We discussed salary and the contract was supposed to be drawn up and signed following the Mr. Olympia contest. He even wanted to give me an invite to do the Olympia since I was already in shape and it was only a few months away. Like I said, everything was happening very quickly.

When Ii got back to my hotel I put a call into Paul to let him know what was going on. Remember, Paul had yet to offer me a contract, officially.  The truth was, I really wasn't expecting one. But once I told him what had just transpired at the Weider offices, he made me with an offer and seemed adamant on making sure I signed with him.  Remember, I had already done all those photos with Muscletech products. Paul was planning an entire campaign around my turning pro and was ready to take it to the next level.  The timing was perfect for him to use me as the face of Muscletech and I think hearing that others were interested in me caused him to panic a bit. He told me I was the only athlete he wanted and he knew that with my face representing his line, it would succeed.  I'm sure all of you remember all the ads plastered all over the magazines with my images .

Well, after thinking about it and weighing out my options, I decided to sign with Muscletech. It was a hard decision at the time because I had already made a verbal deal with Joe Weider. I was taking a risk, at the time, signing with Muscletech.  They were just starting out and no one really had heard of them yet. I was, actually, advised by a few people in the industry that Weider was definitely the way to go and that signing with an unknown company would be a huge, unnecessary, risk. I just felt loyal to Paul and believed in his concept and felt that I would be the only face of the company; whereas, with Weider I would be one of many. Plus, I was friends with Paul and felt that I would be, essentially, turning on him after all his friendship and support.  Needless to say, Joe was very disappointed and he told me I was making a mistake, but, ultimately, he respected my choice. Joe, actually, had never even heard of Muscletech at the time. It's was really funny that no matter who I told in California that I was signing with Muscletech, no one had a clue as to what I was talking about.  Oh how things can changed!

Once i returned from California, I officially, signed with Paul, and shortly after that we launched the official Kovacs/Muscletech joint effort at the 96 Olympia in Chicago.  This time it was a lot different than what transpired at the Arnold earlier that year. We had a big booth with a huge poster of me stating: "Greg Kovacs...Newest IFBB PRO" We were the busiest booth at the expo with lines of people waiting to meet me and ask about these new supplements i was using to get so huge and freaky. After that, things kept building . . .all the magazine coverage and Muscletech ads made me a household name. And I kept growing. I spent the next years travelling and promoting Muscletech all over the world. They were exciting times. Incidentally, in those years, as the company grew, I saw and spoke to Paul less and less. In hindsight, that probably wasn't a good sign. I think it's hard when you're friends and there's also business involved. 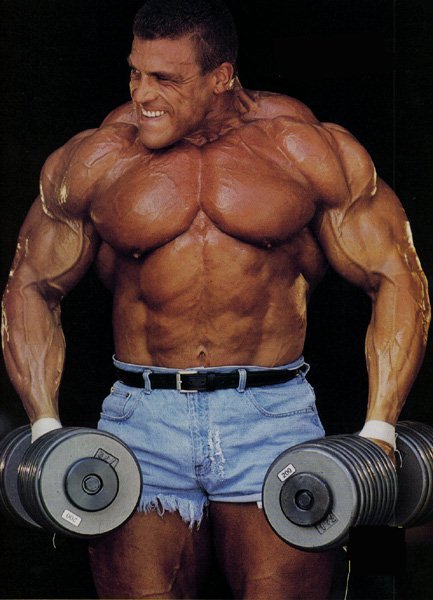 I received a call from a Muscletech representative in the late summer of 2001. I will never forget this moment as it was one of the worst moments in my bodybuilding career. This representative told me that Muscletech would not be renewing my contract. He said it very matter of factly and with no real explanation as to why. I was devastated to say the least. I had been warned by certain people in the industry that once Muscletech got to the point where they could sign other athletes that this would probably happen but I really thought, in my heart, I'd stay on with Muscletech. I wasn't doing well competitively but I felt I still had a lot to offer since I was the largest and strongest bodybuilder in the world, with a huge fan base. Plus I suppose I felt that since I started with the company, I would also end my career with them.

In the end, the only real regret i have is that Muscletech didn't keep me on with them in some capacity . . . in the offices, doing public relations, product development, marketing, appearances.  It really hurt my feelings more than anything else. Well, my pocketbook too, I guess.  Looking back, I take solace in the fact that I was the original, sole athlete, that helped Muscletech build the foundation to the company they are today. Remember, a house is only as good as its foundation and no one can deny or take that away. Of course, I am grateful for the opportunities I had because of Paul's support and help. It just would have been cool to be there from beginning to the end, I'll always be remembered as the original Mr. Muscletech. People ask me, all the time, if I'm bitter about what happened. I can honestly say I'm not. It's just business and Paul did what he felt he had to do and you certainly can't argue with his success. Ironically, some people still associate me with Muscletech.  They ask me which of the products I use and they want to know how to use them. I should get residuals, dammit.  I wish.  Who knows, maybe Paul will read this and give me a small sponsorship for my return to the industry. Or maybe even a retirement package?

So that's the story of how I met Paul Gardiner of Muscletech. He was nothing more than a young bodybuilding fan that created opportunities for himself and used the connections he had to build a concept in his mind and actualize it.  I'm hoping he reads my account and sees it as a testament to his success.  Paul made me realize that, in life, you have to chase your dreams no matter what anyone else says or does.  Only you need to believe that your vision is in the realm of possibilities.  And once you create that vision, sit back and enjoy the ride of a lifetime. 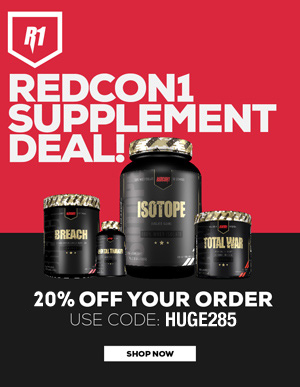