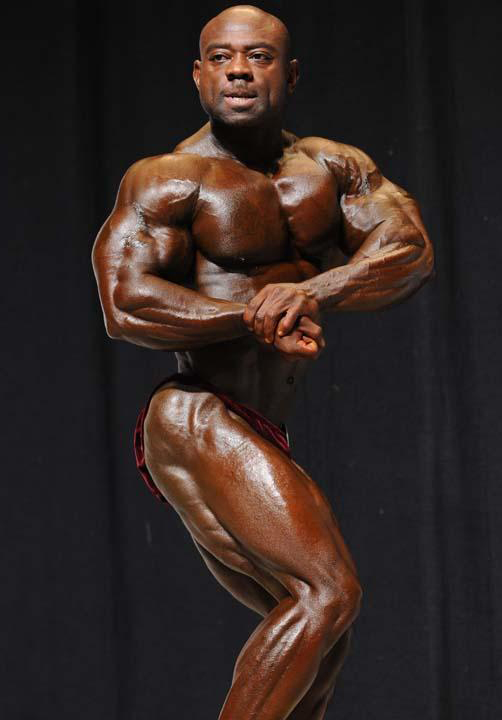 Saturday night, January 29, Chulsey Graham, top NPC National Bodybuilder, was with his wife Tonia and his three daughters in his McKinney, Texas home. He was recovering from back surgery he had the day before. Just to let everyone know, Chulsey's back problems had been very well documented as you can see for yourself in the video below.

Chulsey decided, after much deliberation, that he couldn't continue to progress in his training without going under the knife. I spoke to Graham family friend and NPC Judge and posing coach, Sheilahe Brown, today and she explained that she spoke to Chulsey the Friday before the surgery and he seemed pretty comfortable and confidant with the routine back surgery he was going to undergo.

Graham's back surgery was a success, and his close friend IFBB Pro Charles Dixon spoke to him to him the following day. Dixon described Graham as being "out of it", and "groggy". This isn't that strange as the effects of anesthesia depend greatly from person to person. That Saturday

night Graham experienced some pain from the surgery and took some of his prescribed pain medication. After taking the pain meds, he laid down to rest, and, an hour or so later, his wife Tonia checked on him and found him dead.

Obviously, when something tragic like this occurs everyone starts to wonder how this could possibly have happened to a 39 year old man, in good health.  Current speculation is that Graham, like many large bodybuilders (myself included), have varying degrees of sleep apnea.

Sleep apnea is defined as a sleep disorder characterized by abnormal "pauses" in breathing or instances of abnormally low breathing, during sleep. Each "pause" in breathing, called an apnea, can last from a few seconds to minutes, and may occur 5 to 100 times or more every hour.

The autopsy hasn't been performed yet, but what the doctors currently believe is that the anesthesia plus the pain meds, inconjunction with SEVERE obstructive sleep apnea, depressed Chulsey's breath to the point of resperatory failure.

From all accounts, Chulsey was a great friend, father, husband, and bodybuilder, and he will be sorely missed.

Chulsey leaves behind three daughter and a wife, please contact me if you would like any details on how you might be able to help Chulsey's family or if you have any other questions at [email protected]

My "journalistic integrity," as well as that of Rx Muscle, has been called into question recently by the head honchos over at FLEXonline.com.  When I first read these attacking statements, I responded in a verbally aggressive manner because I thought what I wrote was true. Since then, I have found out that the boys over at FLEX/AMI didn't know, and actually thought (and may still think) I was fabricating the entire story. It's taken me a week, and a lot of deliberating, to decide how I wanted to proceed... But here's what I'm going to do.  I'm going to lay out the series of events that transpired, and the people I spoke to, before writing the story, and I'm going to let you, the readers, decide whether or not I properly researched the article or not. 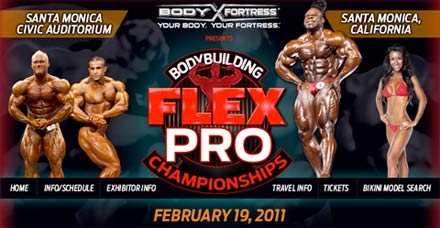 A few days before I broke the story that "Dennis Wolf wasn't planning on doing the FLEX Pro", I had been hearing these rumors from several friends inside the industry. That's how rumors start.  When I hear the same rumor from enough people, or a few key people, I feel it's my job, as the Yuckmouth Yenta, to investigate further.

One of the main rumors circulating was that Muscular Development didn't want Wolf to do the show. They wanted Evan Centopani's return to the stage to be as victorious as possible, and they didn't want two of their "main guys" going head-to-head before the Arnold; and certainly not at a "FLEX Magazine show".  At this point, I felt that I needed to go to a top MD staffer to get some verification since this isn't the kind of thing I could afford to be wrong about.  (see Facebook conversation with Shawn Ray below) 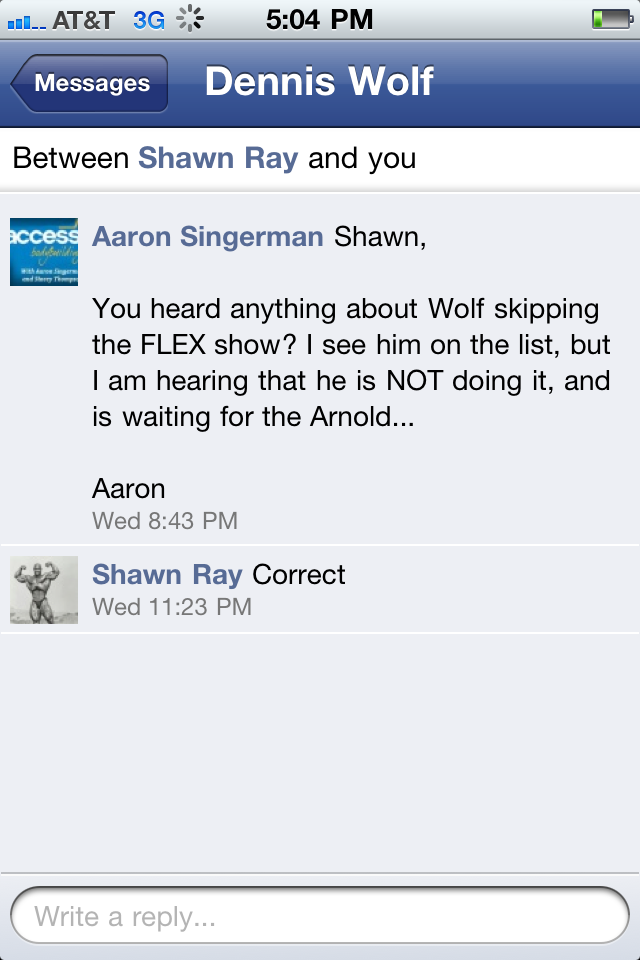 Going in for the Kill 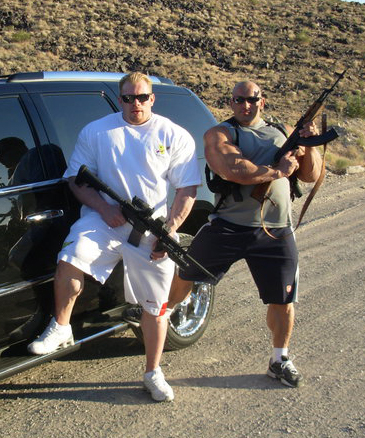 Shawn Ray's validation that Wolf would not be competing might have been enough to write the story; however, I just didn't feel secure with a single source. You never know, Shawn might have been "messing with my head". . .you never know?  Or maybe he didn't know with 100% certainty?  So, I started to think, who's someone close to Wolf who witnesses his daily diet progress, his training, and his mental state of mind?  The answer was obvious; his training partner, and 2010 NPC National Champion, Robert Burnika. Now, I want to preface that I consider Robert to be a friend and I don't want this in any way to reflect negatively on him.  I couldn't live with that guilt. But, I feel it's important for people to know why I ran with the story. (see text conversation below). 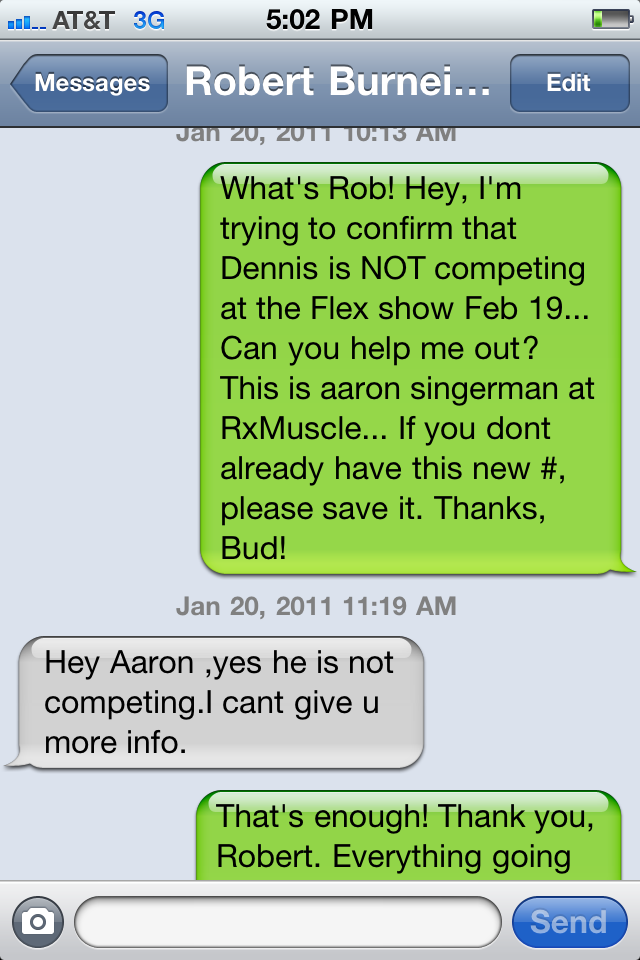 At this point in time, I was very excited. I got a huge scoop and it was verified by two sources. I wrote up the story, sent it to Dave Palumbo to edit and inspect. I also forwarded Dave the two screen shots you see inserted in this article. Jointly, we decided to put the story up.  Hours later, all hell broke lose, and the shit storm continues to this day.

The problem surrounds a misunderstanding of sorts. What I didn't know was that Dennis Wolf signed a contract with Robin Chang and Weider/AMI months ago to do the FLEX Pro on February 19th. As far as Robin knew (until he read my article), Dennis was planning on honoring the contract. Since that's what Robin believed, I've got to assume that's what the rest of the FLEX crew believed as well.

Yesterday, I spoke with recently retired IFBB Pro Dennis James on the phone, and he informed me that Dennis Wolf always planned to honor his contract with Robin Chang and Weider/AMI. Not only that, Wolf just spent the weekend with Dennis at his home in Arizona, and Dennis claims that this is the best Dennis Wolf he's ever seen.

Back to the MD rumor

Now, back to gossip mode. Is it possible that MD's Steve Blechman really didn't want Wolf to do the show? Did he think he could get Wolf out of doing the FLEX Pro without penalty? Well, one thing's for sure, there were definitely people inside MD and the Wolf camp that thought it was possible for Wolf to get out of the signed contract.  But, admittedly, I'm only speculating here.

In retrospect, I wish I had gone directly to Robin Chang with the "story" right from the beginning. He could have confirmed that Dennis is, in fact, doing the show and I could have avoided all this drama.  I'm sorry for any problems my column may have caused for Robin Chang, AMI/Weider, Dennis Wolf, Robert Burinka, and even Shawn Ray!