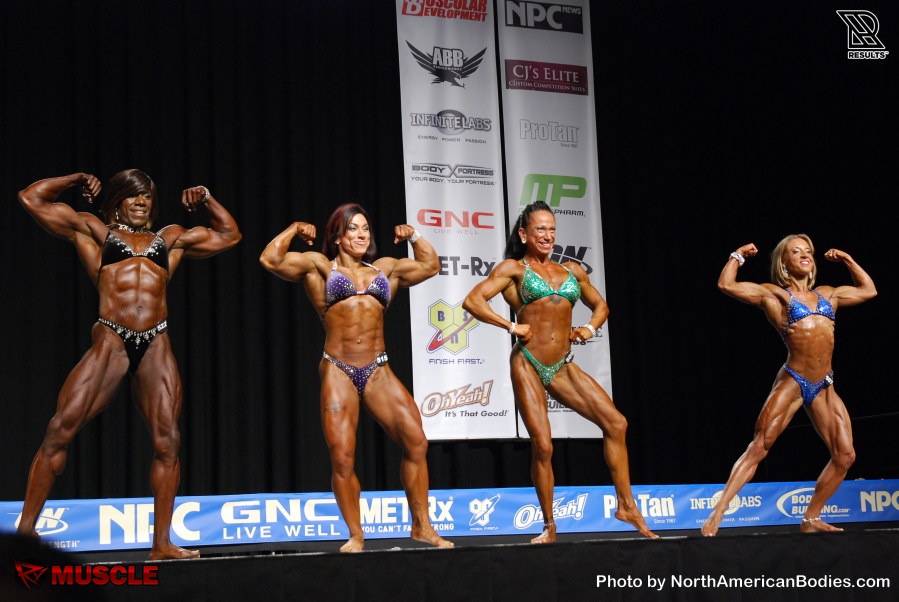 I don't often write a contest report the magnitude of the NPC Nationals in the first person, but in this case I'll make an exception... simply because the 2015 edition of this event was so exceptional.  In a year when two iconic events in women's bodybuilding - the Ms. International and Ms. Olympia - were unceremoniously shown the door after decades of establishing a undisputed worldwide reputation for women challenging their physicality at the highest level, the NPC Nationals stepped up before the end of the year to continue the battle to advance the cause at the amateur level in the women's Bodybuilding division... and advance it they did.

For over the 30-plus years I have attended and written accounts of the NPC Nationals where as many as 60 entrants had entered this division in the past, and as few as the 18 who made up this year's event. But there has always been a story to tell.  So many great stories.  And this year the feisty band of 18 who ventured to Miami came to this tropical paradise not knowing - or were particularly concerned with - how many fellow competitors they would flex against. Sure, the turnout in women's bodybuilding this year was the lowest ever at the NPC Nationals and more than one naysayer has pointed a bony finger to its demise.  But guess what? This group of women competed with enthusiasm and, unwittingly, produced the some of the most interesting results in the long history of the NPC Nationals.  Collectively, it almost didn't matter how many women entered each weight class, in the end all 18 managed to compete as one, and as a group they managed to 'score one' for women's bodybuilding.Promoted again this year by Steve Karel along with his able crew led by Pam Betz, the NPC Nationals has become a gargantuan event with nearly 1,000 competitors taking part in the several divisions offered.  With this year's event held in Miami at the James L. Knight Center, the city and venue have history in the Sunshine State. Miami was hosting its seventh NPC National show this year dating back to 1986 when this same Knight Center welcomed the contest to Miami for the first time.  Since then the event has been staged in Miami in 1987, 2003, 2006, 2011, and last year. Fittingly, this would be the biggest of them all.Great Things Come in Small Packages

The uniqueness of this year's WBB division lies in the reality that the big news came with the Lightweight class.  For the second year in a row only three competitors entered this class, but it only took one to make history.  Twenty-five year old Holly Pisarcik scored a unanimous win with very good overall conditioning, a terrific side chest pose and nice quad separations.  Her look made it easy on the judges to grant her the victory and earn her IFBB pro status.  But it didn't stop there for the 5-0, 108-pounder from Glen Burnie, Maryland.  Having competed in just two previous contests before the Nationals, Pisarcik placed third in the Physique division at the 2014 NPC Jay Cutler Baltimore Classic.  This year she returned to that event and won the Bodybuilding division. In fact she had only decided on entering the Nationals just four weeks before the event.

And then there were the family challenges. Pisarcik's husband Kris related after the contest that, "...she had a hell of a prep....spent everyday with me in the hospital while I was recovering from a liver transplant, then I was out of the hospital and readmitted, yet she pushed on.  Then this past week her grandmother died and on Thursday, while in Miami, I got a call from my doctor saying I needed to go to the U. of Miami for testing because I could be rejecting my liver... didn't phase her..." Triumph through adversity, you say?

The remainder of the contest would produce three more weight class champions (more on them later).  But once all four winners returned for a final posedown, the judging panel decided that Holly Pisarcik was the best - if not biggest - package to bestow and honor as the overall winner of the NPC Nationals.  All 108 pounds of her. Now some history.  Lightweights have won the overall NPC National title in the past, but it has only happened four times - and not since Michele Ralabate claimed the fame in 1994... 21 years ago. Further, Pisarcik is the smallest competitor ever to win the overall National crown at 108 pounds... or in a somewhat more humorous perspective, about the same size of Big Ramy's left leg!

So now as the newest member of an elite sorority of past National overall winners that include Cory Everson, Diana Dennis, Nicole Bass, Sheila Bleck and last year's winner Susan Smith, among many others, Pisarcik becomes the quintessential 'giant killer' in the pro division.  It would be worth the price of admission just to see her stand in with women who outweigh her by 60 pounds or more! Finishing second to Pisarcik was hometown favorite Frauke Diaz from Miami, followed by South Carolina's Amy Sutter in third.

No Gray Area in the MiddleweightsIt was down right surreal to see just two contestants take the stage in the middleweight class at an NPC National Championships. In what was, for many years, a very popular class where the weights ranged from 115 to 125 and the fields in this class were often as high as 20.  North Carolina's Nicole Gray and Californian Tram Nguyen each tipped the scales at 119 pounds with Gray garnering the unanimous vote of the judges.  Coincidentally, both Lightweight winner Holly Pisarcik and Nicole Gray were prepped by David Johnston who deserves a trophy himself.  For Gray, her victory was noteworthy as she is the first competitor from North Carolina to win the NPC National middleweight class.  She did so with nice overall balance and several highly detailed compulsory poses.  MD writer Peter McGough described her physique as 'tidy'.  In other words it was pretty 'together', and it was plenty together enough to claim the win.  Last year six competitors entered this division, and I'm certain Gray would have welcomed the additional four entrants.  Regardless, her victory earns her a pro status and the chance to compete at yet an even higher level.The Light-Heavies

As the first division of the contest with more than three entries California's Carla Rossi and Texan Cassie Bates made the judging interesting.  Although their physiques were somewhat different the final judging tallies showed they were only two points apart - a fact that was understandable based on their own unique qualities.  With Rossi showing impressive muscular thickness and volume, her shoulder/arm tandem was eye-catching when viewing her from the front. Overall, it could be said she needed to be tighter in terms of conditioning, but those plus factors weighed more heavily with the judges in this weight class.  Bates on the other hand showed a very strong structural look and even development from head to toe. Most interesting is the fact that Rossi weighed 137 1/2 while Bates tipped the scales at 137.  Their genetics, however, created what finally made the final decision even though their weights were virtually the same.

The Heavyweights - A Battle RoyalWhat National Championship bodybuilding event would be complete without a gripping one-point brawl between two competitors for a coveted National weight class title.  As small as this year's Bodybuilding division was, a spirited group of eight heavyweights made things interesting with a smaller cadre of individuals within the eight who added color to the competition.  The first call-out was the only call-out.  Judges obviously felt they would get a good enough look in one shot.  But things were closer than they expected. New Yorker Tischa Thomas and Pennsylvania's Theresa Ivancik - standing side-by-side - each showed strong physical qualities on structures that were very different, yet very good on their own.  Thomas carried 170 muscular pounds on her 5-8 frame, while Ivancik weighed in at 159 1/4 and was a few inches shorter. Thomas gained an edge on tighter conditioning, especially in poses like the side chest, but Ivancik countered with a more voluminous look to her well-shaped muscled throughout her physique.  Turning 45 on the 28th of this month, Thomas is 45 with three children and five grandchildren. Competitively, she was second at the IFBB North American in the Over-40 class this year, and was a Masters and Overall winner at the NPC Eastern USA in 2014. Ivancik on the other hand began her competitive exploits as a Figure competitor, but by 2011 she was a full fledged heavyweight placing fifth at the NPC Junior Nationals and winning the Bill Grant Classic.  Most recently she was third at the NPC USA, and won the HW class at the IFBB North American Championships this year.  Put simply, it was excruciatingly close with Thomas getting the final winning point.

Meanwhile, Alabama's Melissa Fanning and Georgia's Wendy Watson also put on a donnybrook of their own with just one point separating the duo and Fanning getting the edge for third 19 to 20.  And although Kireen Ellis missed finishing the event, she could be seen casting a huge shadow on her heavyweight contemporaries during the prejudging and setting a record in the process.  Many years ago emcee Lonnie Teper dubbed Lora Ottenad the 'Washington Monument' due to her size as the NPC National heavyweight champion. But Ottenad, from Seattle, may have to step aside from her nickname as another of Seattle's Best can rightly claim the name.  You see, Kireen Ellis entered this year's Nationals at 6-0, 216 1/2 pounds.  Yes, 216 1/2 pounds. That is by far the largest female competitor in the history of the NPC Nationals surpassing Nicole Bass when she competed at 204 pounds. A former varsity letterman in basketball at Washington State University, Ellis has also competed in powerlifting and is a former winner of the 2014 NPC Emerald Cup. Ellis last entered at the national level when she placed sixth at the 2014 NPC USA.