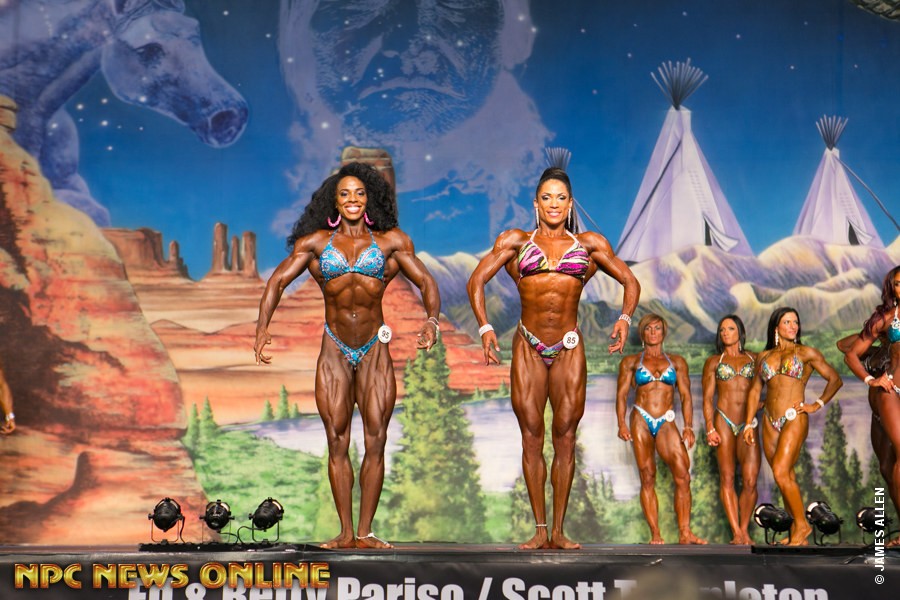 The Physique Olympia has passed with Juliana Malacarne defending her title in late September while a host of new stars surfaced over the 2015 contest year. But that was then... Now, in the blink of an eye a new contest season is upon us and beginning in October the race to qualify for the 2016 Physique Olympia is underway at full speed. The starting blocks came by way of the Europa Phoenix Pro promoted by Ed & Betty Pariso on October 10-11 at the Phoenix Convention Center, and already a healthy field of 18 contestants were all buffed and shiny, eager to get the early bird start. Now with the Phoenix Pro in its fourth year - and the second featuring the Physique Division - the bar was set high last year when Teresita Morales won the inaugural event. In fact, last year's top five - that also included Heather Grace, Tamee Marie, Jamie Postill and LaDrissa Bonivel - all moved on to the 2014 Physique Olympia. Clearly, this year's event, after a quick perusal of the entry list, would be far from a pushover. 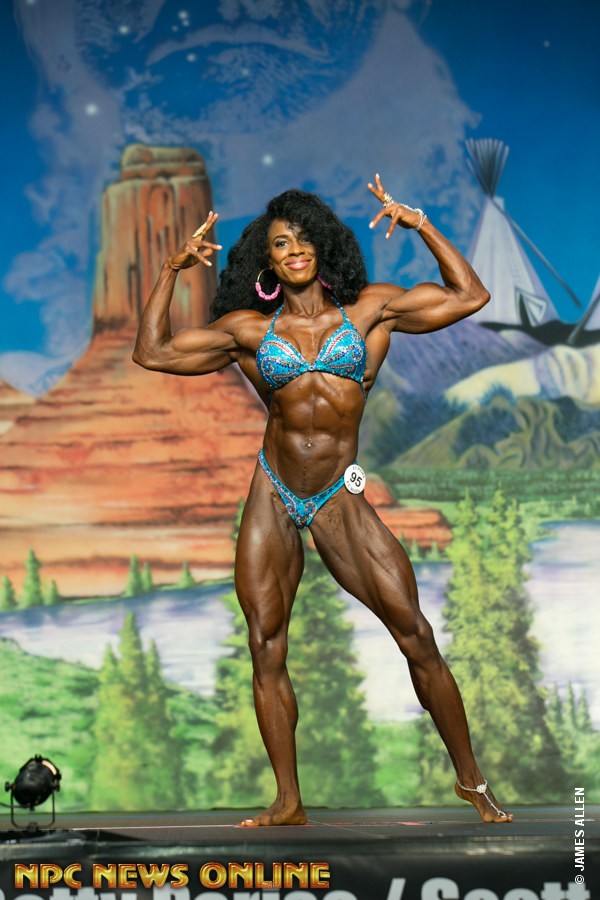 Most frequently the first callout of the prejudging is indicative of who is being scrutinized most closely. And in this first call, a group of six were brought forward for further magnification by the judges. Of note was the fact that all six were from different states Oregon, Texas, Oklahoma, Illinois, South Carolina and Alabama. But it was the Alabaman who was listed from the town of Bessemer that brought an immediate response from the audience. The reasons were twofold. Susan Marie Smith may be from Alabama currently, but her hometown is Phoenix and the former Arizona State grad had a notable following in the house. More pointedly, she was presenting a magnificent overall look that lit up the Expo Hall, and she was going to be a major role player in the final judging decisions. At 5-6, Smith entered this event at a crisp and well-conditioned 139 pounds. By comparison, she weighed 152 when she won the overall NPC National bodybuilding crown last year. The catch was she still maintained a full musculature that fit her skeletal structure so well. She's complete from top to bottom, and the sobering aspect is that she is only really just getting started with her competitive efforts that began with a victory at the Los Angeles Excalibur in 2011. A year later she scored a solid third-place finish at the NPC Nationals, leading up to her overall victory at the NPC Nationals last year. In each of these amateur events, Smith exuded that intangible presence on stage that caused the eye of a judge - or audience follower for that matter - to continue to be drawn back to her look. She was the IT girl at this event That element created a steamrolling effect with each passing onstage minute, and in short order she took command of what the final result would be. She became the 'Smith Machine'. 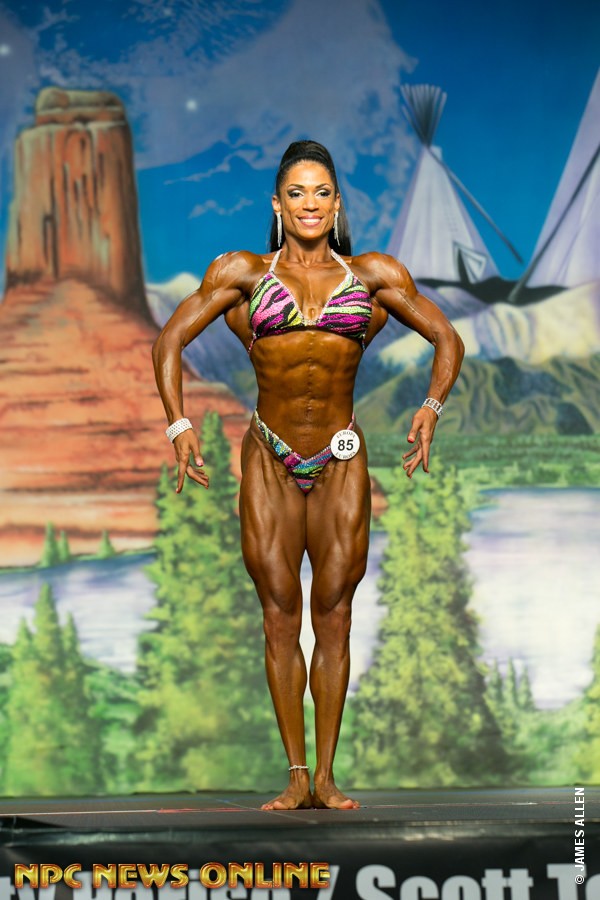 Texan Jessica Gaines no doubt carried a pointed goal to this event, and that was to win the contest outright. And although her final tallies landed her in the runner-up position, she made a major breakthrough in her competitive career efforts to date. Showing a dazzling stage presence and a striking level of conditioning that gave her a thoroughbred racehorse appearance, she challenged Susan Smith throughout the event. Gaines had made emphatic gains in her status as a Physique pro in 2015, and the 5-5, 127-pound frame she has built her current look upon will suit her well in the immediate future. Having earned her pro status with a victory at the 2013 NPC Junior USA, she was welcomed with a sobering indoctrination into the pro level with a 16th-place showing at the 2013 Europa Super Show in Dallas. Since then, however, and with only one exception, she has been a consistent placer within the 6th to 7th range over the course of eight contests through 2014 and 2015 - always on the verge of breaking into the top three at any time. The fifth-place showings she nabbed at the Puerto Rico Pro in May and Texas Pro in August were fair warning the time was near. Well, that moment came here in Phoenix, and the result was eye-catching as her time to shine had arrived. A final call-out as the prejudging finished up brought Gaines out with Susan Smith for a final look at the duo. It was an instant that spoke volumes about what her potential can be moving forward. Collecting $1,000 in prize money and earning four points in the Olympia Points Qualification Series she's off to a strong start as the 2016 calendar year approaches.

Third-placer LaDrissa Bonivel - since 2012 - has become something of a walking, talking, flexing history of the WPD pro ranks. An original competitor in the first pro Physique event in 2012, she has been a stalwart workhorse entering no less than 20 contests over the past four years, counting seven trips to the stage in 2015 before the Phoenix Pro. A two-time Olympian (she placed 7th in 2013) and a winner of two pro shows, she has battled in placings ranging anywhere from 15th to 1st. Returning to the Phoenix Pro after finishing 5th last year, she once again showed a well-balanced overall structure from her broad shoulders to a pair of sculpted calves. Bonivel used those same qualities to earn her pro status with a Physique victory at the 2011 NPC USA. Meanwhile her contest history dates back to her days as a Figure competitor in 2005, so she has had a decade to learn the ways of stage presence which she now possesses by the wagon load. The result here enabled her to accept $500 in prize money and three points towards the Olympia Qualification Series. It would be difficult to imagine her not making a third appearance at the Physique Olympia in 2016. 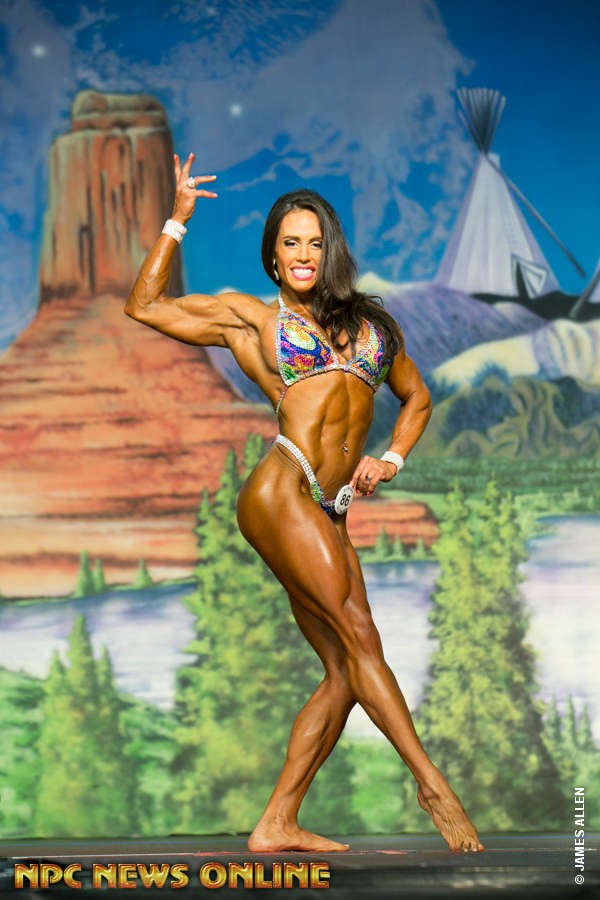 At the recent Wings Texas Pro Valerie Garcia Giovanoli made a successful move into the pro ranks with a third-place finish that mirrored the rapid speed with which she moved through the NPC amateur ranks. Winning the overall Physique title at the NPC Mid-Atlantic Classic last year, she entered the NPC Nationals four weeks later finishing second in her class to capture her pro card status. The top placings come as little surprise considering her extensive background athletically (volleyball, soccer, softball and gymnastics) contributing to her overall structure and muscle shapes. In total, they make for a very pleasing package. At 5-5, 138 pounds she also displays gifted genetics that help create the desirable flowing bodylines. Those qualities will help keep her very competitive as she explores what level of conditioning and bodyweight will be idyllic for top level competitions such as the Physique International or Olympia that potentially loom in her future. For her fourth-place finish here she pocketed $500 to go with her two points towards Olympia qualification. 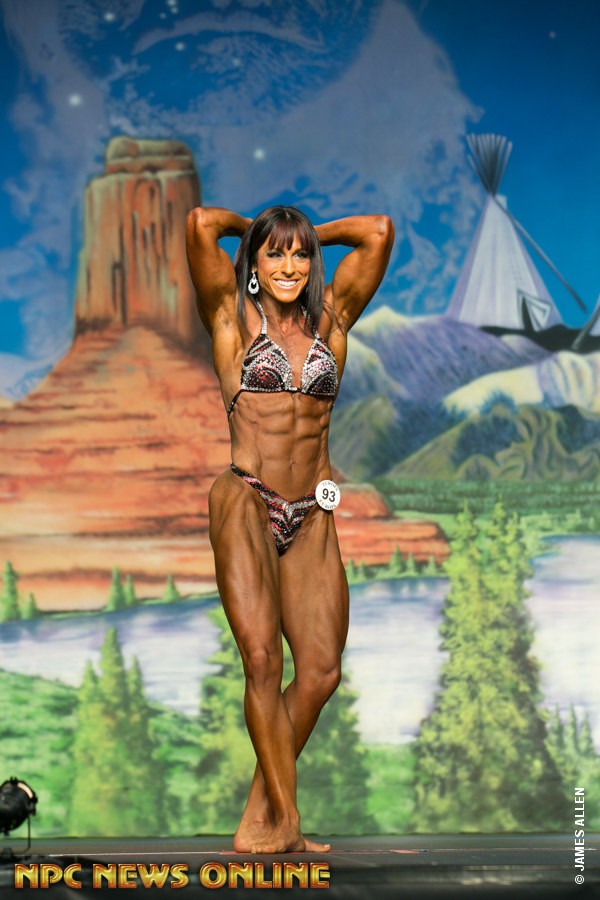 Fifth-placer Angel Starr Saucier made an auspicious pro debut with a physique that highlighted her long lines and streamlined overall look. Another of the pro Physique division's rookie competitors who possess a short list of contest experiences, Saucier's most notable efforts came by way of a victory at the 2014 NPC Emerald Cup before reaching the pro level by placing second in the 2014 IFBB North American Championships Masters (Over 35) class. Like Bonivel and Giovanoli in front of her, she also accepted a check for $500 along with one point towards Olympia qualification. 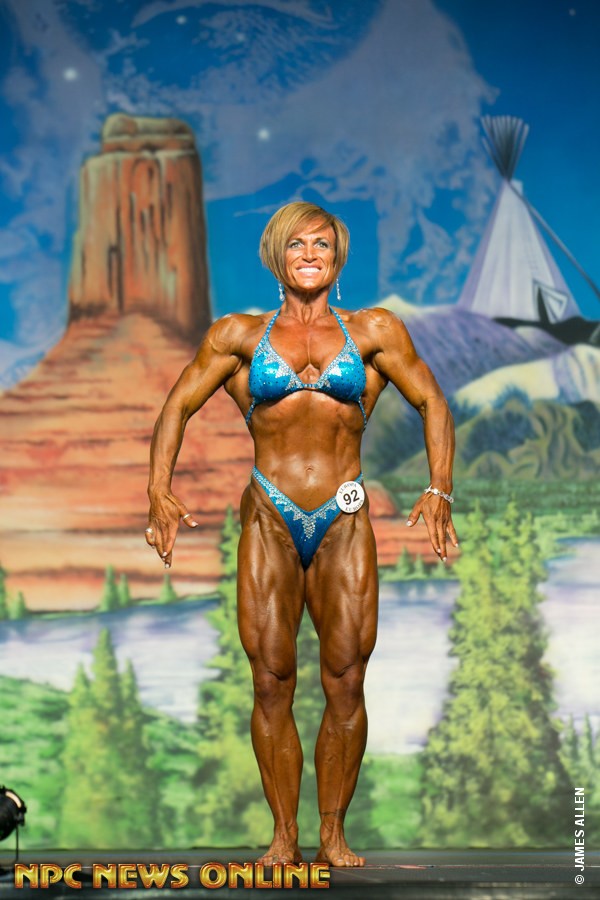 Arizona local Christine Sabo may have only placed ninth overall, but as a veteran bodybuilder with an impressive national level contest resume dating back to 2002, she brought down the house with what was, by far, the best posing performance of the afternoon. Like a hamster on a wheel, Sabo has just kept moving forward in her ongoing love of Bodybuilding....and now Physique. Finally, earning pro status at the 2013 IFBB North American Championships capturing the overall Masters title, Sabo had entered the that event on five previous occasions, so the victory was particularly sweet. The sweetness was made that much more so considering she had also entered two Team Universe events, two NPC Nationals, a Junior National in 2004 where she had won the overall title, and SEVEN NPC USA contests where she had been a runner-up in the light-heavyweight class on three occasions. So in this Phoenix Pro event where she was making her pro debut, Christine Sabo put an exclamation mark on her stage time with the most professional and entertaining performance the Physique division has witnessed in its four-year history. It was pure joy on her part, and magic for the audience who roared with approval. Hopefully someone captured Sabo on video during those crowning moments.