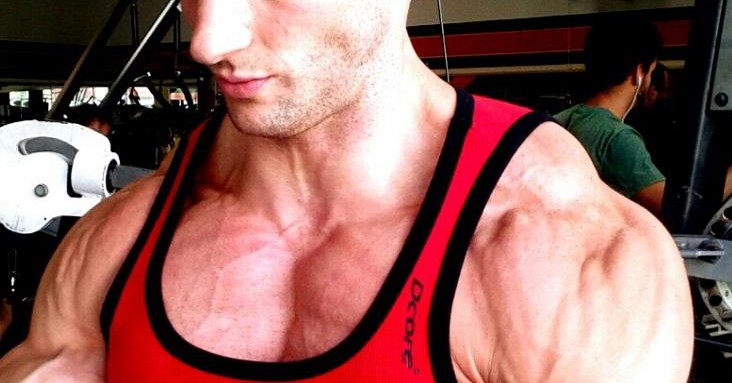 the traps can be a bit tricky, because of the unique anatomical configuration of the muscle. It’s fan-shaped - originating over a broad area along the upper spine, and narrowing down to a much smaller insertion on the shoulder blade (scapula). Because of this configuration, it is able to pull the shoulder carriage straight upward, slightly back and upward, straight backward, back and slightly downward.

Part of the trapezius already works, during a typical back workout that involves rowing. The lower portion of the trapezius works when we do pulldowns, provided the pulley is slightly in front of us (thereby causing us to pull slightly backward, as well as downward). This is why we usually do standing shrugs for our traps - because the upper part doesn’t get enough stimulation from rowing and pulldowns.

However, we often see people in the gym - while they’re doing a Standing Dumbbell Shrug - bringing their shoulder up, and then rolling the them backward, before bringing them down to the bottom again. Ostensibly, they’re doing this because they know that the trapezius muscle has fibers that pull the shoulders backward, as well as fibers that pull the shoulders upward. But this movement is largely ineffective.

The rule in biomechanics is that only the muscle fibers that are positioned on the opposite side of the resistance, are challenged (i.e., stimulated). In other words, if the direction of resistance is straight down (....let’s just call this the “6:00 direction”), the only muscle fibers that will have to work against that resistance are the ones positioned at “12:00”. Rolling the shoulders backward, in hopes of also hitting those lower fibers, is unproductive because they are not positioned opposite the downward pull of gravity.

Those lower trapezius muscle fibers are positioned at the 1:00, 2:00 and 3:00 positions, so the direction of resistance would have to be coming from the 7:00, 8:00 and 9:00 directions - in order to be effective. Pulling the shoulders backward, without a forward pulling resistance, is not much more effective - FOR THOSE LOWER FIBERS - than if you had no weight in your hands at all. So it’s just wasted effort.

The way to effectively work and stimulate the trapezius muscle fibers that are lower along your spine - rather than the ones above the shoulders - is to change the direction of the resistance, or change your body position relative to the downward pull of gravity.

I find the best way to do this, while simultaneously protecting your lower back from the forward pull, is with an “Incline / Prone - Dumbbell Shrug”. Set the incline bench to a very steep incline - approximately 70 degrees (or even 60 degrees). “Prone” means facing downward - so put your chest on the backrest, and don’t sit on the seat - stand up, leaning against the backrest (collar bone above the top edge of the backrest). In this position, you’ll be looking slightly downward, rather than upward. You’ll have to brace the bench, unless it’s bolted to the ground, so it doesn’t slide forward. Otherwise, your bodyweight, combined with the weight in your hands, will displace the bench. The lower the slant on the incline bench, the more you’ll work the lowest muscle fibers of the trapezius.

Allow the dumbbells to pull your shoulders forward (relative to your body). They’re still pulling downward, but you are no longer in the vertical position. As you pull directly opposite resistance (i.e., toward the ceiling), you will now be pulling your shoulders slightly backward - against an opposing resistance. That’s the key. Muscles will not be challenged - and therefore will not be stimulated - unless they are positioned directly opposite the direction of the resistance you’re using.

This type of shrug exercise allows you to make the traps more “thick”, rather than just taller (higher above your collar bones) - and it also provides excellent support of the torso, so the lower back doesn’t have to strain. In fact, you could compare this exercise to a Preacher Barbell Curl - which braces your arms into a specific position, while the biceps do the work. In this trapezius exercise, you’ll be bracing your torso with the bench, so that your full effort will be dedicated to the trapezius.