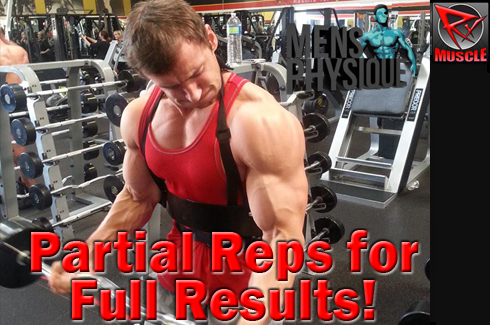 Partial repetitions are an excellent way to add a novel stimulus to the muscles and add overall intensity to a given set.

The first time I encountered partial repetitions was back in the late 1970s when I was about 17 years old. They were actually introduced to me by my older brother. The exercise was ‘21s’ for biceps, one arm at a time, with the working arm supported on an incline bench.  I remember how intensely challenging they were, especially those last seven full ROM reps.

Years later I learned of other ways to use partials such as extending a set by adding small pulses at the very end. These are done after you have reached a fatigued state with full range of motion reps which makes them extremely challenging! Additionally, a lot of variety is available by changing where in the range of motion you decide to add the pulses.

Another approach by Brian D. Johnston, the founder of the IART (International Association of Resistance Trainers), is called 'Zone Training'. Other names such as J-Reps and 'Stage reps' also refer to a similar type of approach.

One way of using them is to break the range of motion into three sections and then finish off with full range of motion reps. I often start with the contracted position (ex. top of a bench press) followed by the middle, and then the stretch position (ex. bottom of a bench press). I will typically do five partial repetitions in each of those zones plus the final full-range-of-motion reps.

To add another level of intensity, you could add a drop set with a lighter load using full range-of-motion repetitions to failure.

I would not recommend using this approach for more than one set per muscle group because it is EXTREMELY taxing!

Partial repetition training can also be used to focus on a specific part of the range of motion. An advantage to this is that you can more appropriately match the loading to the specific range in which you are working. For example, one would typically use a lighter load for the area around the ‘sticking point’ (ex. bottom of a chest press), take a short rest and then do the same thing with the other two zones increasing the load as appropriate.

One of my favorite uses of Zone Training is with warm-ups. Rather than doing a full ROM warm-up and then doing several sub-maximal sets, I will do a single warm-up set consisting of three partial zones and end with full ROM repetitions.

After about 60-90 seconds of rest I will usually go into a single, high-effort work set. The one caveat to this is if I’m doing lower rep work sets with high loading (ex. 4-6 reps), I will do the four-part Zone warm-ups, then a reasonably challenging sub-maximal set before the final work set.