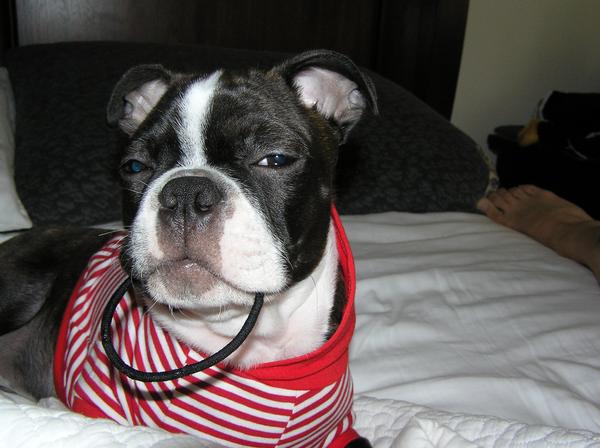 ged the day that I saw my first Boston Terrier.  It was 2002 and Max was in college in Lakeland, Florida, and he and I were going grocery shopping.  After parking and on our way into the local Publix, we were chatting about nothing in particular, when both of us stopped dead in our tracks.  We both just stared.  A grinning and panting, engaging yet peculiar, friendly looking dog was leaning out the window of one of the parked cars.

I just had to know what kind of dog it was, so Max asked the owner, who fortunately was sitting in the car, what kind of dog she had.  It was a Boston Terrier, the breed many know as, “The American Gentleman.”  With their tuxedo markings and square faces, shortened snouts, and upright, pointed ears, this breed knows how to dress for a party without taking themselves too seriously.  After that one encounter, I knew that I would have to have one of my very own someday.

Since Max was in school and my apartment did not allow pets, I had to wait, but it gave me a lot of time to study and research everything I could on dog breeds.  Even after all my research, and attending a dog show or two, my heart was still set on a Boston.  Fast forward several years, Max and I were married, we had lived overseas and in two Houston apartments that were once again not pet friendly.  For Christmas in 2006, I bought another Boston Terrier calendar.  This was not out of the ordinary since I usually bought Boston Terrier trinkets and stuffed animals whenever I came across a cute one.  Max promised me that he would get me a dog the following year.

It was February 2007 and Valentine’s Day was just around the corner.   We were now living in a house and I was working from home when Max called.  To my surprise, he was looking at Boston Terrier puppies.  He texted me a few photos of a puppy that I instantly fell in love with.  Unsure if we were ready for such a commitment, I thought it was best to wait and visit him in person the next day.

On the way home, Max called with worrisome news.  Someone else was takin 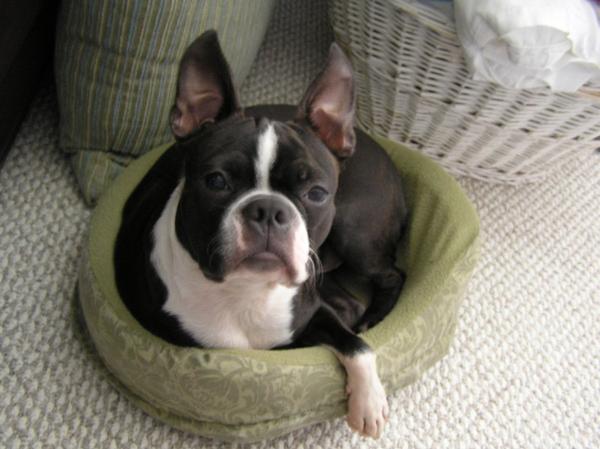 g a fond interest in the same puppy and it may not be there the next day.   Saddened, I went back to looking at my calendar wondering if my dream would come true.  A few minutes later, our friends came over, so I let them in, but went back to the bedroom to get ready and steal glances at my calendar.

Max got home a few minutes later.  To my surprise, he didn't come find me right away, like he always does.  I assumed he was hanging out with our friends.  After a while, he came to the back of the house where I was, of course, still perusing my calendar.  He told me to come out to the living room because there was a surprise out there.  Still sulking a bit, I didn't really see anything out of the ordinary.

Our friends and Max were grinning when I didn't see anything right away.  Just then, I realized that there was some newspaper on the floor, and on it, was the puppy from the pictures!  My heart melted, he was even cuter and smaller than I imagined.  I sat down a few feet from him, careful not to scare him. It only took a second before the three pound ball of fur sprinted off the paper and plowed me over with his puppy kisses.

Just by looking at his black and white face, one of our friends knew to name him Bandit. The name instantly stuck and the nicknames, Bandabooski, Bandaboo, Bud Bud and Bandababy became other pet names.  Looking back at it now, bringing Bandit home and fulfilling my wish for a doggy, helped me find my fitness passion.

Bandit has been with me since the beginning of my fitness journey.  My journey started when he was still a puppy.  I was trying to teach him to walk on a leash, but instead of heeling and following, he always tried to stay one step ahead of me.  He turned our daily outings into a game where he would sprint ahead of me from shade tree to shade tree until I caught up.  He would grin at me before taking off again.  Oddly enough, we would both usually tire out at about the same time.

Max and I temporarily moved back to Florida later that year.  Unfortunately, the condo where we were staying was not pet friendly.  We were not going to leave Bandit behind nor would he want to be left, so we worked it out by pac 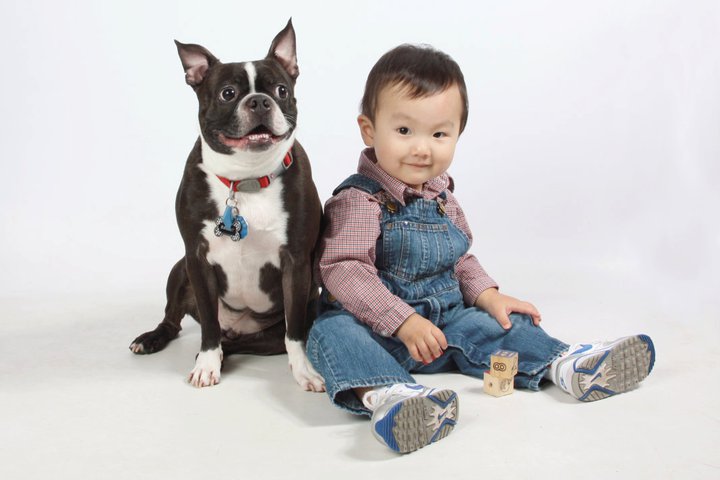 king him in a duffle and walking him in and out of the complex.  While it was not ideal, the situation was temporary and he got lots of exercise at the nearby dog parks.  He made puppy friends while the ladies and I coined our gab sessions, “dog therapy.”  We were happy to make it through the summer without a hitch and Bandit fully potty trained.

When we returned to Houston, Bandit and I really ramped up our training.  I had decided that my first fitness competition would be that September as a birthday present to myself.  We did fasted cardio in the morning and walked at night.  We even convinced Max to come along on some weekend morning runs.  Bandit would seemingly laugh and mock Max for his lack of endurance.

Fortunately for me, Bandit has always had sensitive stomach and naturally preferred to adapt to my bodybuilding diet.  When I buy chicken and brown rice, I am really buying for two.  We both love those, but our favorite is beef!

Now that we live in Minnesota, he still longingly looks up at us with his big round eyes and pleads for us to take him along.  We go to the gym as a family five nights per week and Bandit usually comes along for the ride, unless it is too hot or too cold.  Even now as the weather is turning, he wants to participate.  He sprints to the back door when he knows we are getting ready to train.  We have to bring an extra coat or fleece for him so that he doesn't get too cold and we have to warm the car up extra-long so that the seats are nice and toasty for him.

Bandit has managed to come with us to almost every show that I participate in or that we are spray tanning.  From my first nationals in Dallas to my last amateur show in Charleston, he has been with us, except when we fly, which have been only a handful of shows.  We drive to most of the competitions we work, and while driving is certainly slower, it is worth it to bring our loyal companion along.

December 13th is his birthday.  This year he will be turning seven and like every ye 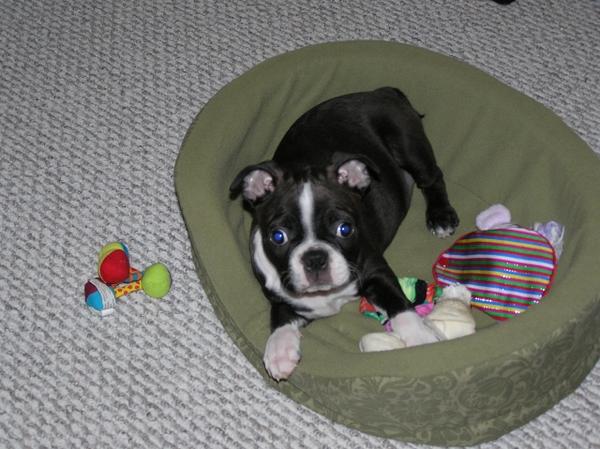 ar before, we will celebrate.  I will bake him a dog friendly cake and light candles on it.  We also buy him presents and a good, juicy chew bone.  It seems ridiculous looking back on it now, but I also tried to buy clothes and make him wear them.  My personal favorites have been dressing him up for Halloween.  He has been a pirate, a beach bum and a cop, always feeling humiliated and looking at us with disdain.

Going into 2014, we are starting to plan my competition schedule and noticed Bandit can come with us for several of them.  No matter which ones we decide on, one thing is certain, Bandit will be there and he can't wait for leftovers from my celebration dinner.