Striking the balance is the goa 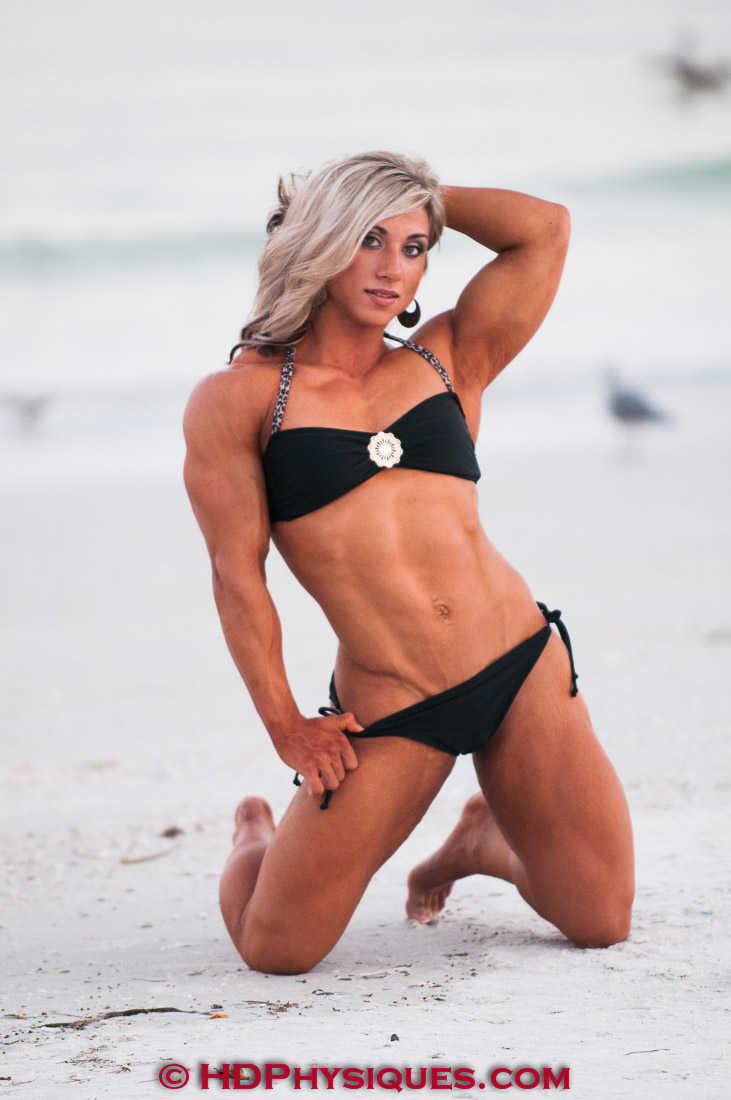 l. For a woman, especially a young woman entering a sport that many say is on its way out, that's an important milestone. There's a segment of Women's Bodybuilders, the pragmatists if you will, that see the writing on the wall and they've started jumping ship. Some will choose retirement, meanwhile others will opt to join the ranks of Women's Physique, Figure, or maybe even Bikini. But then there's the women that do bodybuilding because they love it. They're the women that will go down with the proverbial ship. That is, if they can't steer that ship to safe waters by way of striking a balance – delivering a perfect combination of femininity, muscle, and symmetry. Shannon Courtney, like a small handful of others, just may save the sport of Women's Bodybuilding.

For too long, those of us that support the women have had to point to the past champions (e.g. Corey and Lenda) and/or past sell-out crowds. Shannon Courtney is the present and the future. Here's to Shannon and Women's Bodybuilding! Enjoy the interview – here at RxMuscle.com – one of the few websites that has always recognized muscular women (in a positive light) and promoted them tastefully and respectfully!

Q: Shannon, welcome to RxMuscle.com, please take a moment to introduce yourself to the audience (full name, age, include IFBB Pro status, where you're from and if possible what gym you train at).
A: Shannon Courtney, 22 years old, IFBB Pro Bodybuilder, from Oakdale, California, Inshape and Fitness Evolution.

Q: You initially got started with Physique, talk to us about transitioning from that division to Bodybuilding and do you ever see yourself competing in both?
A: At first I started with Figure (2 shows) and never did well, I was always too muscular and too lean, judges told me to switch to bodybuilding. I never wanted to compete as a bodybuilder, though. I hated the image it had. I didn't want to be a part of it. Then when I heard about the new division Physique I thought it was perfect for someone like me.  So I entered a Physique show thinking I would do very well. Turns out they placed me close to last because again I was too muscular and too lean. Judges and others advised me to either tone down my legs and back to fit the category or transition into Bodybuilding. I wasn't positive on switching to Bodybuilding, but I also didn't want to stop training the way I liked and, of course, eating how I want. It took a while for me to decide, but I thought why do I need to become the stereotypical women's bodybuilder? I just need to stay true to myself, keep doing exactly what I'm doing. So… I switched.

Q: You placed 3rd in your class at the 2012 USA's and then returned a year later win your class and the Overall, turning Pro. I've always believed that the USA is the gold standard for turning Pro, followed by Nationals, the North Americans, and Team Universe, respectively. Was this contest the only show you had your heart set on winning to turn Pro? And what changes did you make to your training, diet, and/or supplementation from 2012 to 2013? 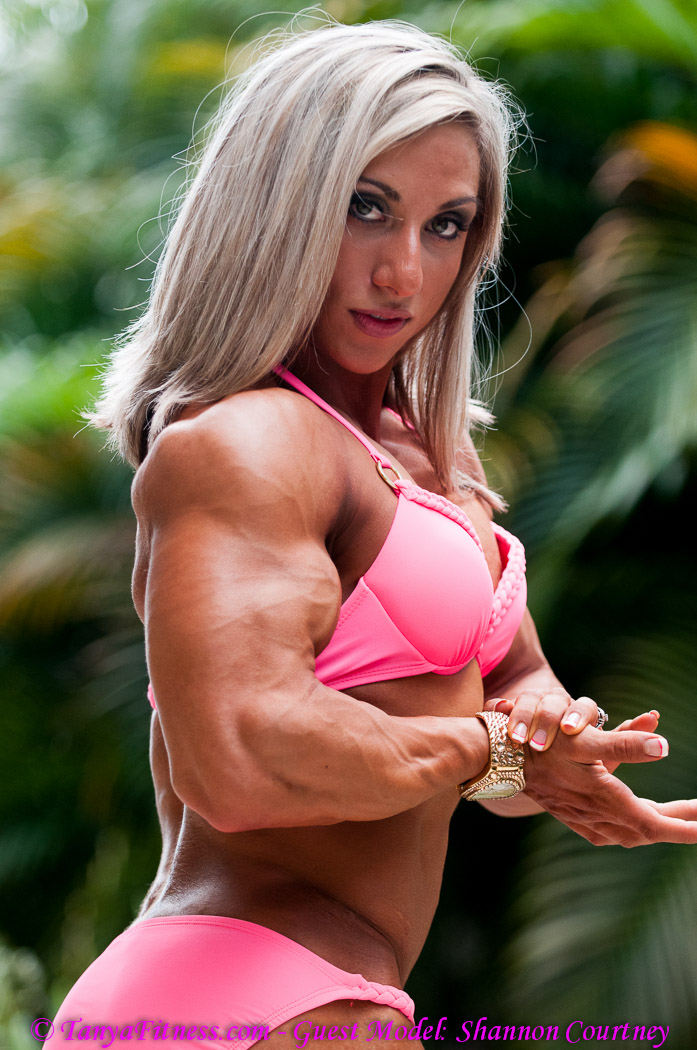 A: I agree with you with the order of national shows. I believe USAs is the most competitive and the best Pros come from that show. I was set on winning USAs, but I did have in mind doing Nationals if I didn't achieve my pro card that July. The first changes I made for prep of USAs was switching coaches. The best decision I could've made. Last USAs I was on a starvation diet and hours of cardio (which screwed me up big time after the show), so this past USAs was completely different – I had a cheat meal every week up to two weeks out! Sometimes even two cheat meals! Best prep I ever went through. I sailed through it.

Q:What are some immediate and long-term goals that you've set for yourself as a Pro Women's Bodybuilder? Is it possible for a woman to still make a living in the supplement/bodybuilding industry without delving into obscure, perhaps risqué employment?
A: I would love to qualify for the Olympia. That is a goal I'm setting for myself next year. We’ll see what happens! Honestly, I don't think 95% of women bodybuilders are promotable. I get that and understand why. I'm hoping I will bring a new look to the division and change some opinions on female bodybuilding. I do have a couple sponsors, so I am lucky with that and very, very grateful.

Q: Aside from having a beautiful physique, you're a beautiful woman. What are the fans like at contests, online, and/or in person? Did you set boundaries early on, or was it a learning process?
A: I’ve been gaining a following very quickly… on Facebook, Instagram, other places on the web I don't even know about and randomly find out. It’s pretty cool and motivating for me.
But as I gain more fans I gain more haters. Sometimes it's hurtful but I’ve learned more and more just to ignore and keep doing my thing. And of course there are the ones with the weird fetishes that I completely ignore!

Q: Let's talk about the future of Women's Bodybuilding. If, heaven forbid, the Ms. Olympia went the way of the Ms. International, would you stop training, would you stop improving yourself? I guess the real question is, even without the shows, would you stop being a woman bodybuilder?
A: This year there was a lot of talk of the end of Women’s Bodybuilding and it did make me reconsider what division I wanted to continue with. I was considering Physique again, stopped training for 5 weeks, cut my proteins way down, upped my cardio and I was depressed... I hated it, it just wasn't me. Then I received the schedule for next year’s shows and saw that there were actually shows added this year for Women’s Bodybuilding and Olympia was scheduled again. I was excited and talked with my coach and realized if this sport really isn't about money why am I doing something that's making me unhappy? So I'm back to bodybuilding and will not stop until it does end. If it does, I think I will take a break and have another baby, this might force me to get smaller if I need to transition to Physique.

Q: Let's talk about training. It seems everyone in this game has a nutritionist, a training guru, a massage therapist, a publicist, and if possible someone to train for them (kidding on that last one!). Is your Team a Team of 1 or do you have people that help you along the way?
A: I have an amazing coach – IFBB Pro Lisa Aukland. She has coached me through this past USAs, the Tampa Pro show, and now this off season. I will continue with her this next year. She is there for me every ste 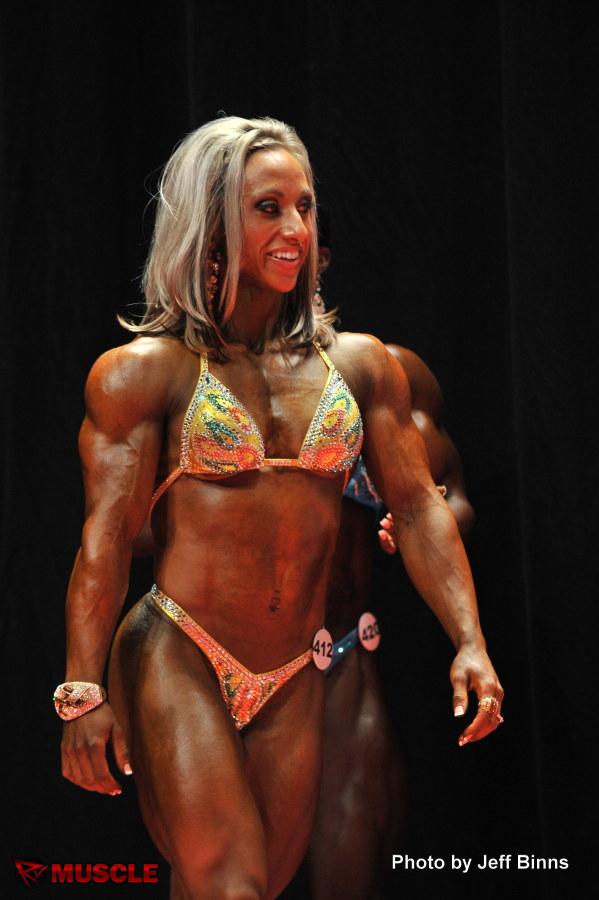 p of the way, I cannot thank her enough!

Q: In terms of training and diet, what's your take on women having an off-season and/or bulking up? I think that women (from Bikini to Bodybuilding) shouldn't add a ton of weight (like the men do) because it's a lot harder for women to lose it later. What's your take, what's worked (or not worked) for you?
A: I think women should NEVER bulk, absolutely no reason… unless you are trying to step into Bodybuilding and need to put on a good amount of size. Even then bulking doesn't mean eat whatever you want when you want. It seems to me that's an excuse to get fat. Throughout the off season women (and men) should be on a consistent program to either maintaining or adding lean muscle – still need to eat clean foods.

Q: How important is femininity to building muscle for a woman? Why do you suppose some men and some women attack muscular women? Envy, jealousy, ignorance?
A: I think the majority are just so unfamiliar with what the human body is capable of, they want to shout 'STEROIDS!' any time they see a muscular women. I'm not saying most female bodybuilders don't go overboard, that's why it has a bad name. I’m saying it is possible to gain a great amount of size not drugged up. Staying feminine in this division is so important. After all, it is called “Women’s” Bodybuilding.  I understand some don't like the muscular look, but those are also the ones that can’t appreciate it – the ones that have no idea how much hard work is put into it. To those people I don't even waste my time on.

Q: Let's talk about the 2013 Ms. Olympia. Are you happy with the placings? I'd love if you could share your Top 5 for that contest.
A: I hate to say it... because I do like Iris Kyle but honestly she isn't a good image for the sport. It makes me upset that the judging isn't going toward the feminine look, they're setting it up for failure. In my opinion I think Alina Popa should've received the 1st place and Debi Laszewski 2nd.

Christian Duque: Thanks again for taking the time to speak to us. I hope we'll see you on the RxMuscle.com forums and/or hear you on Rx Muscle's Muscle Girls Inc.

Shannon Courtney: Thank you! I would also like to thank my sponsor Joe from HD PHYSIQUES and Tanyafitness.com. They have paid for a lot of my traveling expenses and couldn't have done it without them! My other sponsor Barthel Fitness for all my awesome gym clothing. Seriously, my entire wardrobe is Barthel, I love it! And my new sponsor MAN Sports Nutrition for their awesome supplements! Of course, I couldn't forget the people that put up with me every day… my husband Mike Courtney and my little guy Kaiden (2 years old). They are what keep me going every day.