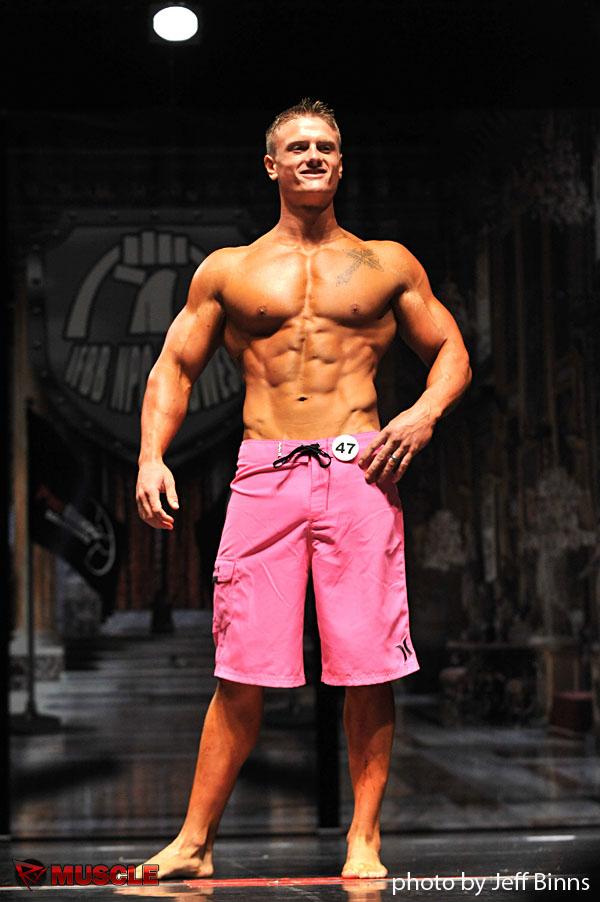 the man in the shorts, Tyler Sandell. Tyler is chasing his dreams, no matter what!

Honestly, I never really knew anything about the sport until I met a diet coach. She showed me how to pose and gave me the knowledge I needed to be a competitor. I was powerlifting at the time and coming out of my fourth knee surgery as well as changing my career out of the military. I saw my first show in July of 2012 and was hooked from that day on. I stepped on stage for the first time in August 2012 at the Jay Cutler Classic in Maryland, placing 7th out of 22.

I recently competed in the IFBB Pro Bikini and Midwest Naturals in St. Louis, Missouri. It was a smaller show but still had a good turn out with over 100 competitors. There were a lot of big names there due to the Pros being there so I was able to meet some great people.

I felt good, I had a great couple meals that morning and when I got on stage I felt like I had a great package compared to the other competitors. It was a good feeling being put towards the middle of the group and felt like I stood out. I felt leaner and bigger than the previous show I competed in. My wife was not able to make it to prejudging but came about an hour after. So I was able to spend time with my daughter and her. I took my family and some of our good friends to the St. Louis Zoo and had a blast.

I trained for first and ended up with second, but it was a great show and a great experience. It was truly a good feeling knowing that I looked good and that all of my hard work paid off. I was happy that I qualified for nationals and I am ready to step on stage again.

I believe that this division gives the ability for a lot more athletes to step on stage without feeling like they don’t belong. Not everyone can be a bodybuilder nor want to be. If you look at the women's divisions they have four different categories in which they can compete in. Having Men's Physique is growing the Men's Division that much more.

I have had four knee surgeries, two of which were ACL reconstruction. I have been told by many doctors that I wouldn't be able to continue my fitness career. I enjoy competing in the Men's Physique Division. There is a lot of controversy over the division, but I personally feel like this division is making the sport grow. I believe that Men's Physique is perfect for me and what I want for my career. This has given me the opportunity to grow as a person and athlete. I have met some great people so far in my career and I have only scratched the surface. I have recently attained a sponsorship with Titan Nutrition and look forward to growing in this sport! 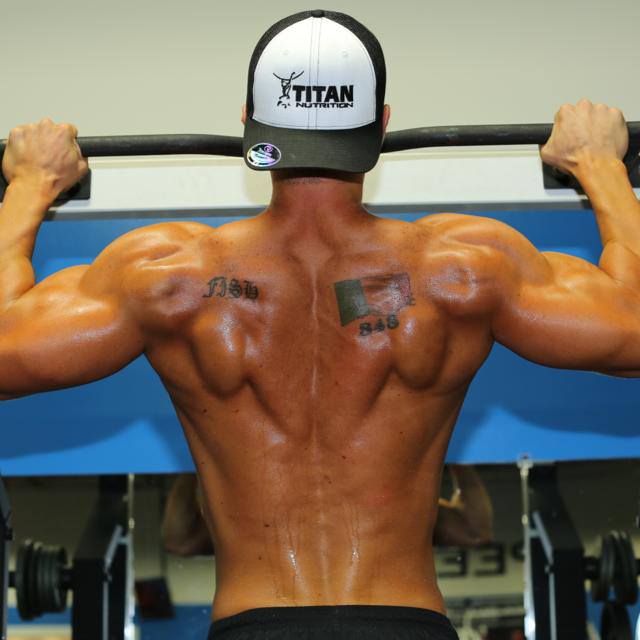 Favorite type of training: I like it all, actually. I prefer to do the old school approach with weights rather than cross fit but I do like a good workout of the day every now and again.

Favorite exercise: Pull-downs. I do a variation of grips, 6 grips for 6 sets of 8.

Meal 6 630
6 oz of steak or chicken
(Usually chicken with salad and a vinegar and oil dressing.)
1 cup of green veggies

Meal 8 right before bed
Small shake casein made with milk and soy milk 3 oz of each.
Scoop of level-1
1 serving of RestStor Titan Nutrition

I have always been athletic and played sports in high school. However I was never big enough to play contact sports. It wasn’t until I joined the military that I became a gym fanatic. I love the results from the training and how I felt. The one thing that sparked my interest most would be finally being able to grow and not be the 140-pound boy I was in high school. 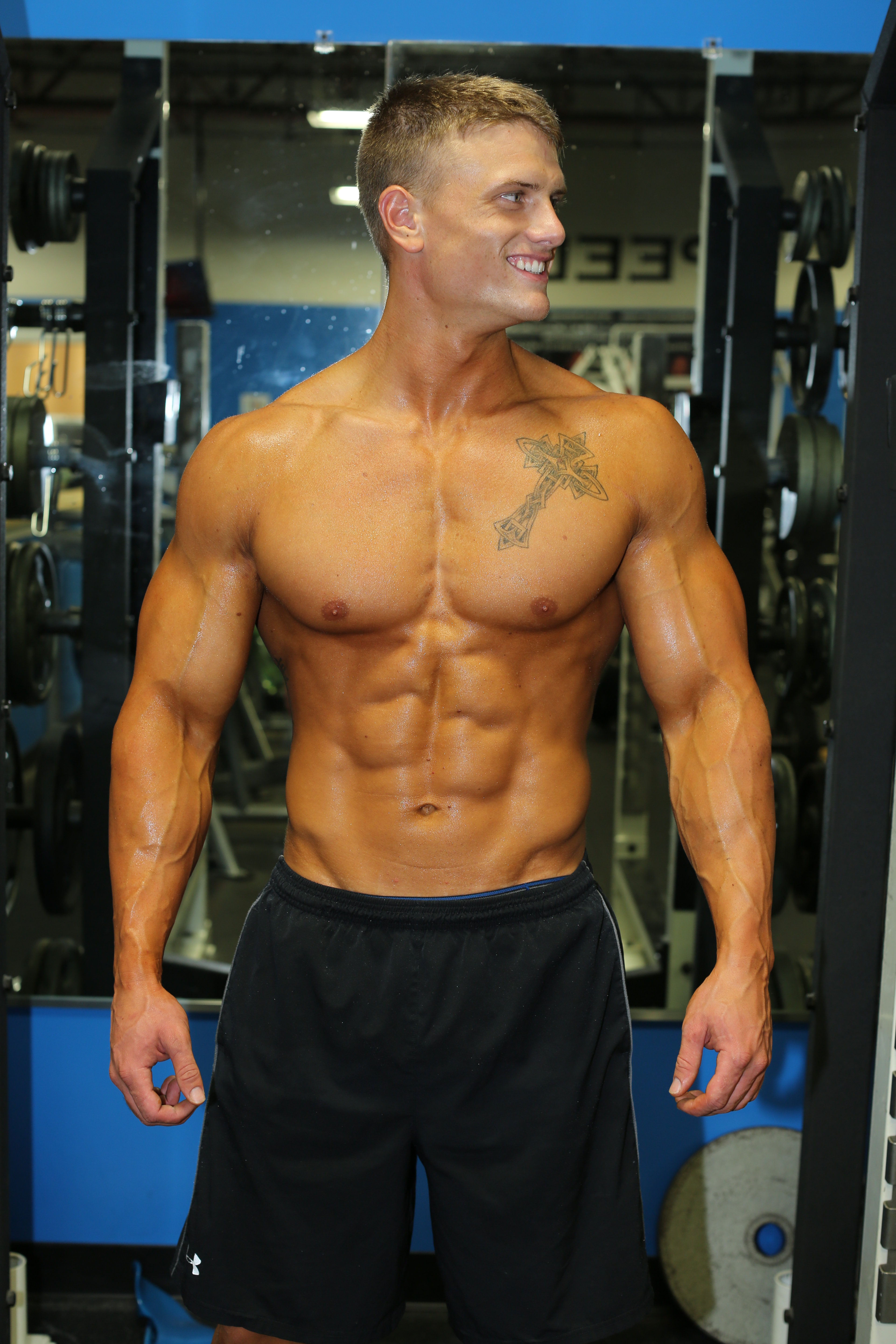 My wife definitely influences my training. She is my rock and always helps me through my diets and training programs. She gives me motivation I need and helps me through the hard days. Also, seeing my daughter every day is motivating. When I was younger, though, my brother definitely sparked my interest in the bodybuilding sport. He competed in 2002 where he won the Japan International.

Sports: I enjoy swimming, scuba diving, snowboarding and like to watch NFL.

Special interests: Being with my family is the one thing I love most in this world. And spending time with my little girl. Also, I love to do anything outside (hunting, fishing, hiking, etc.).

Awards and/or accomplishments: Sponsored athlete with Titan Nutrition, I have been in two newspapers about my time in the military and meets I have competed in. I have broken a state record in Maryland for bench press when I was competing in powerlifting. During my time in the Army, I served as an Engineer Deep Sea Diver. I have received multiple medals in the military, two of which are an ARCOM and AAM.

All my setbacks and negative people in my younger life. I think about the doctors telling me with how bad my knee is that I can’t do it. It only motivates me more. I can and will achieve all my goals and won’t let anything hold me back.

I am a proud and very lucky father to a beautiful little girl. She is amazing and brings true joy to my life. As I have previously stated, I have had two ACL surgeries, and two meniscus surgeries, all of which were within a four-year time span. I want everyone to chase their dreams no matter what.