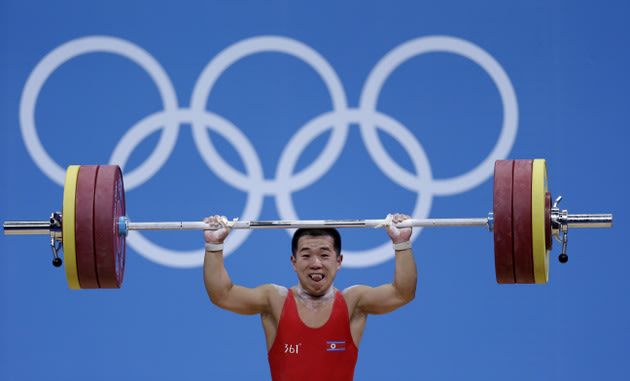 Whether it's high jumpers leaping nearly two feet more than their own height or sprinters running 100 meters in less than 10 seconds, there are some Olympic feats so remarkable they seem to defy basic common sense. North Korean weightlifter Om Yun Chol pulled off another of those Sunday.

Om, who stands just 5-feet tall and weighs only 123 pounds, won a gold medal in the men's 56-kilogram category thanks in large part to clearing an Olympic record 168 kilograms (370.4 pounds) in the clean and jerk. In the process, he joined the likes of world record holder Halil Mutlu and Naim Suleymanoglu of Turkey in an exclusive group of weightlifters who have lifted three times their body weight.

Asked how a man so small could lift a weight so big, Om credited the "Great Leader" as North Korean athletes often do after great achievements.

"How can any man possibly lift 168kg? I believe the great Kim Jong Il looked over me," Om told the Olympic News Service.
What's most amazing about Om's accomplishment is he had never lifted more than 156 kilograms (343.9 pounds) in a competition before. As a result, the 20-year-old was part of the "B" group with lower-ranked lifters on Sunday and had to wait until the "A" group competed later in the day to find out if his performance was enough to earn him a gold medal.

Om's total in the snatch and the clean and jerk was 293 kilograms (646 pounds), four more kilograms than second-place Wu Jingbiao of China managed. Wu, a two-time world champion, was the heavy favorite entering the day.
One aspect of Om's performance Sunday that was also surprising was the amount of personality he showed in setting the record.

A smiling Om riled up the crowd when it was announced he'd take aim at the Olympic record after clearing 160 and 165 kilograms on his first two attempts. He then confidently secured the bar at his shoulders and briefly lifted it above his head, a mighty effort from a mite of a man who etched his name in Olympic annals for years to come.