"For me life is continuously being hungry. The meaning of life is not simply to exist, to survive, but to move ahead, to go up, to achieve, to conquer." Arnold Schwarzenegger

Truer words have never been spoken in terms of developing a unique and storied athletic event. In 2002 Arnold Schwarzenegger and his planning committee contacted powerlifting expert Dr. Terry Todd to develop a strength contest as part of the overall Arnold Schwarzenegger Sports Festival. The program they developed has become the backbone to the entire centenary Arnold festivities.

Much like the storied debacle of Mixed Martial Arts promoters battling for bragging rights, the strongman talent pool was split amongst several organizations. The now defunct International Federation of Strength Athletes and the World’s Strongest Man promoters could not agree to terms and thus athletes were to choose which camp to compete under. The ASC fixed that problem right from the beginning; no organization for athletes to join. This allowed every competitive strongman from around the globe the opportunity to be selected to the invitation only event. The door opened for athletes from multiple disciplines to compete in the same arena. Strongmen, Powerlifters, Olympic lifters, Highland Games athletes and even a professional wrestler have competed. These prolific athletes have provided great battles over the years.

The two biggest issues with how to create the ultimate strength contest were who and what. Who would show up that would provide amazing strength displays? Well, they decided to narrow the field to some incredible but diverse athletes - by invitation only. WWE wrestler Mark Henry, Strength athletes like World’s Strongest Man champion Svend Carlson, powerlifters like Brian Schoonfeld and deadlift world record holder Andy Bolton gave the field depth and creativity.

The second task was to develop unique apparatus to test these varied athletes while providing the spectators with a very unique experience. With the 1,000lb Hummer Tire Deadlift, 1,100lb Super Yoke walk and the Circus Dumbell weighing in north of 200lbs, the fans have walked away in utter awe of the spectacle they witnessed. Add the 400lb Appolons Thick Gripped bar press overhead and the crowd favorite Atlas Stones makes this spectacle of human fortitude something unique. Think classical images of vaudeville strength attempts with modern day metallurgy. 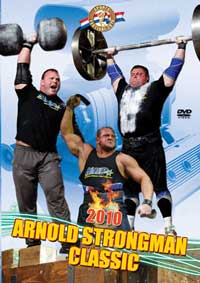 The Strongman Competition has gone through several name changes. In 2001 the event was billed as the Arnold Classic Strongman Competition. Perennial strength athlete and WWE wrestler Mark Henry won that event. He netted $10,000 and a very Arnold’esque new Hummer AWD vehicle. The following year it became the Arnold Strength Summit and a now very familiar named Lithuanian, Zydrunas Savickas won his very first Arnold overall championship. A fete he would duplicate for the next five years. Not a single American placed on the podium that year nor the next.

2004 and 2005 saw the name change yet again to Arnold’s Strongest Man. The purse also increased to $16,000 and yet, another Hummer. Again, no American made the podium. World’s Strongest Man American regulars like Phil Pfister, Mark Phillipi and Brian Siders finished in the middle of the stacked group. In 2006 the athletes from foreign countries like the Ukraine, Ireland and Russia were making the podiums behind the ever dominant Savickas. This year saw another name change that may sound familiar: The Arnold Strongman Classic (ASC).

Following five straight years of Americans not making the podium, the 2008 competition saw newcomer Derek Poundstone grace the dais with a second place finish. Poundstones’ performance set the stage for some incredible feats of strength in future competition. Derek finished second behind Savickas at the 2008 Worlds Strongest Man later in the year.

2009 became a wide open competition as it was announced Zadrunis Savickas would not be competing.  Several newcomers set their eye on the top spot. First time ASC American competitor Travis Ortmayer looked strong in his first few events pushing Poundstone and the always formidable previous podium finisher, Russian Mikhail Koklyaev. In the end, Poundstone destroyed everyone in the circus dumbbell lift and vaulted himself into first place. Using a technique no one else had attempted, Poundstone alternated hands to give greater endurance.

The 2010 ASC the attendance for the events was packed with fans rabid to see what these men of mettle were going to bring to the table. Zadrunis was back. Poundstone returned to defend his title.  Ortmayer was in phenomenal shape and the Russian Koklyaev looked ready. In his first invite to ASC, the giant American Brian Shaw at more than 400lbs brought a new look to the event. When the dust settles, Derek Poundstone outlasted Savickas and took the top spot. The first time in ASC history that Savickas had been beaten in competition.

This year’s competition will bring either disappointment to the fans or jubilation to the athletes. All of last year’s implements are back in play, however several at much heavier and more challenging weights.  The circus bell alone will weigh in at 242 pounds, up from the 228 pounds of previous years. The Timber Carry, will have athletes carry a wooden frame weighing more than half a ton up a 32-foot inclined ramp. Last year’s frame was challenging for several athletes and it weighed in at 875 pounds.

So many questions and so many possibilities beset this years Arnold Strongman Classic. New and old athletes are seeking the coveted title. New apparatus bring new challenges for these athletes. Who will set the new standard for these apparatus? Stay tuned….