In Bill Starr’s text, The Strongest Shall Survive, the basic pressing program was laid out much like the squatting program – a singular exercise, constant volume, and fluctuating intensity over the course of a week.  In Starr’s program, the bench press was the exercise of choice for all 3 days.  The benefit of this set up was that it was simple in concept and logistically feasible in a busy weight room with lots of athletes already occupying the squat racks.

However, I remember reading in an old issue of Ironman Magazine that Starr actually didn't believe that benching for all three workouts was the best setup. He recalls that his primary reasoning for setting things up this way was (1) he wanted the simplest program possible, and (2) the popularity of the bench press among high school coaches made the program more marketable.  Starr stated in the article that he actually would have preferred using the overhead press for all 3 days, but that he didn't feel that his audience of high school coaches would buy into the program the same way.

Fortunately we are not in a situation where we must choose just one exercise for the pressing program.  The squat is unique in that it has no rivals when it comes to leg exercises.  Front squats, box squats, overhead squats, etc, are all decent exercises, but none of them match up to the transformative power of just the basic back squat.  Even in its light and medium versions, it could be argued that the squat is still a more effective tool than other variants of the lift.

With pressing it isn't quite so.  Both the bench press and the standing overhead press (or just the Press) should be included and given their due attention in almost any basic strength program.  It is hard to say which is better – the press is certainly more functional from an athletic standpoint, but the bench is equally as valuable in its allowances for much heavier loads.  Even those who discount the functionality of the bench press should realize that regularly training the lift will help to drive steady improvement on the press.

My basic recommendation is that the heavy day exercise in the program always be bench presses.  In almost every situation I can imagine the bench press 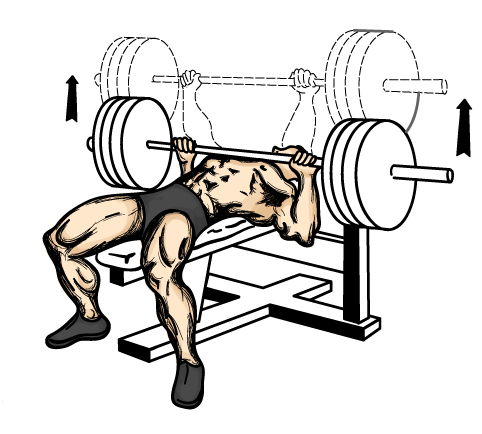 will allow the trainee to use the most amount of weight relative to all other pressing exercises.

For the light day exercise, I would always default to standing presses.  Relative to just about any other type of barbell pressing variant, the strict overhead press will utilize the least amount of weight.

So what about the medium day?  There are a number of exercises to choose from, but for the sake of this article, I will go with my top 3 favorites:

1)    Close Grip Bench Press.  This option would be for those who want to focus on the bench press as their primary exercise.  If I was using the HLM system for power lifting, this would be my exercise of choice.  Close grip benching has been utilized by competitive power lifters for years as a primary assistance movement for competition style bench pressing.  The close grip bench obviously stresses the triceps more than most competition style bench presses do, and because of this, the close grip bench also serves as a powerful assistance exercise for the press as well.  Especially from the midpoint on up, the overhead press is largely dependent on tricep strength. Any exercise that allows the lifter to overload the triceps with heavy weights will have tremendous carryover to the press as well as the bench press.

2)    Push Press.  For the more athletically minded push presses are an excellent medium day exercise.  This would be a good choice for many sport athletes, strongman competitors, Crossfitters, or anyone who wanted to put overhead pressing strength as their top priority.

3)    Incline Presses.  The incline press moves the bar at an angle that is directly in between the press and the bench press.  Because of this, the incline could be considered the closest thing to a “hybrid” of the two exercises and should have carryover to both the press and the bench press.  Of the two, the incline press will probably have more carryover to the bench press simply because you are laying down against a bench, and the pecs are stressed slightly more than the delts are.  However, those that regularly take out limit attempts on the press know that a significant amount of “upper chest” is utilized during reps that require a lot of layback to complete.  Angles vary on incline benches, but lower inclines 30-45 degrees, will be much more helpful to bench presses, and steeper inclines (around 60 degrees) will be of greater benefit to presses.  For a trainee who wants to focus mainly on mass and physique, I would choose Incline Presses over options 1 and 2.  As most successful bodybuilders will tell you, inclines are the staple of their chest training workouts as opposed to flat presses.  The look that comes with a full and developed “upper chest” will greatly improve the aesthetics in a bodybuilder, and go a long way in making the shoulder girdle appear bigger and wider than it may actually be. An important point to make is that the trainee does not have to just pick one exercise and stick with it for any length of time.  It is perfectly acceptable to focus on one or the other for a period of a few weeks or months and then switch to another.  It might even be a good idea to rotate the three movements on a weekly basis.  This is an area where a lifter can permissibly sneak some variety into the routine to keep things mentally and physically fresh.

As a final note, I intentionally did not include partial exercises into the discussion.  Partial rack bench presses and presses are valuable exercises, but add a layer of complexity to the discussion that I didn't want to get into.  Depending on how the particular exercise is set up, partials may use more or less weight than their parent exercise, and this will affect its status as a heavy, light, or medium exercise.  As a general rule, partial exercises could probably fit into most medium days just fine – even if the weight that was used was not technically “medium.”

With over 13 years of dedicated strength coaching experience, Andy Baker is one of the most sought after private strength coaches in the industry. Andy has provided strength & conditioning coaching to dozens of elite athletes and hundreds of clients who want to change their lives through his methods. Andy is the owner of Kingwood Strength & Conditioning, a private gym dedicated to training athletes and members of the general public.  Andy has been a featured speaker at several prominent industry events, and is the co-author of the best-selling Practical Programming for Strength Training. Andy is a former U.S. Marine and while serving on active duty received his undergraduate degree in Health & Sport Science from the American Military University. Andy also holds the industry’s highest credentials available from the National Strength & Conditioning Association, USA Weightlifting, and is a certified Starting Strength Coach. Andy resides in Kingwood TX with his wife Laura, and 2 children.