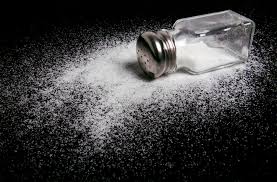 Salt has gotten a bad rap due to its rampant overuse in the food and restaurant industries and its potential to elevate blood pressure in susceptible individuals.  However, it is responsible for the generation of nerve impulses, electrical conduction of the heart, and the contraction of all other muscles in the body.

The human body contains 4 to 8 ounces of salt and requires this to regulate body water, proper blood volume and normal blood pressure.  It’s quite remarkable how the body can rid itself of excess sodium via the production of sweat and urine.   Perhaps you have noticed instances in which you have retained water after a brief spike in dietary sodium intake, but this is rather short-lived in healthy individuals.  What happens is that the high concentration of sodium causes fluid to travel from body tissues into the bloodstream to dilute the sodium influx.  Blood volume increases, then blood pressure also increases, triggering the kidneys to increase urine output in order to excrete the excess sodium and water.

I’m not suggesting that you consume massive amounts of sodium in your daily meal plan, but I have met many competitors and athletes who are so terrified of the idea of consuming any sodium that they do themselves a disservice by pulling their daily sodium intake down significantly.  When you keep sodium intake at very low levels for the long term, the kidneys will conserve serum sodium as a safeguard.  When contest day approaches, no amount of water manipulation will work to give you that dry and peeled look if sodium was not on board in the weeks preceding the event.  It is a far better strategy to maintain a sodium intake of approximately 2 to 3 grams per day, so that when you drop sodium and water intake right before a contest, it will be much easier to shed that subcutaneous fluid.

If you still aren’t convinced of the importance of sodium in your daily diet, remember that your body needs sodium to function properly in general.  You also lose a considerable amount of sodium through the profuse sweating that most, if not all, of you fellas experience during your intense lifting sessions.  If you consume very little sodium, and also lose a great deal of sodium through sweat, muscle contractility will become impaired and cramping will often develop.  That’s reason enough to grab a little sea salt and add it to a few meals each day.

You might want to experiment a bit to see when it is best for you to cut sodium for a contest.  For most competitors, cutting sodium intake in half for four to seven days before the event, then cutting water the day before showtime seems to work well.