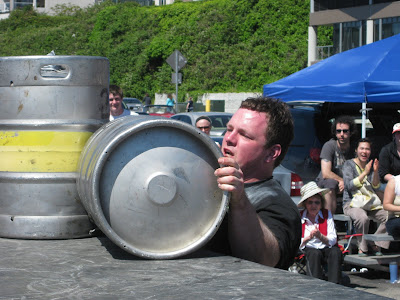 Hobbies: Anything athletic, anything that is a challenge.

2006
Oregon’s Strongest beaver, Corvallis, OR
wt class- unlimited (bodyweight-190lbs)
place-11th of 13
Comments-first show and I picked one of the hardest chows in the country.

2007
Golden state’s Strongest man, Fresno, CA
Wt Class-231 (202)
Place-11th of 18
Comments- Another high level show. I showed with an impressive performance and the president of NAS gave me a special invited to Teen Nationals.

Teen Nationals, Whitchita, KS
Wt Class-Unlimited (202 in jeans so I could make the 200lbs cut off)
Place-1st of 23
Comments-First and only teen show in my carrier.

2008
Golden State Strongest, Fresno, CA
Wt Class-231 (220)
Place-1st of 25
Comments- Thought I went pro here but there was a misunderstanding and I did not. Beat many people who had beat me a year earlier.

Washington’s strongest Apple, Des Moines, WA
Wt Class-265 (232)
Place-2nd of 7
Comments-First HW show, I had to weight in a second time because the first time I was too light to compete as a HW.

NAS Nats, Lafeyette, LA
Wt Class-231 (231)
Place-2nd of 53
Comments-Very tough feild, nationals is always that hardest contest to win because if you have one bad event you will lose the whole show. I won 2 of 5 events.

2010
Snowman invitational strongman, Nampa, ID
Wt Class-265 (232)
Place- 2nd of 8
Comments- won 4 of 6 events, was recovering from torn teres minor so didnt do so well on the overhead pressing event which brought my overall place down. I was 1 point out from first which is VERY close in strongman terms.

Sequim strongman show, Sequim, WA
Wt Class-231 (230)
Place-1st of 7
Comments-Won 4 of 5 events and put quite a show on for the crowd as always. The margin was so large I didnt have to do the last event to win the show, but I did anyway.

2011
Am. World championships, Columbus, OH
Wt Class-unlimited (220)
Place- 37th of 60
Comments- Very disappointing show, as can be seen I lost a lot of weight right before the show, I got rather sick but decided to give it a shot anyway, I am not a quitter. I was the second lightest person there and beat some of the worlds top competitors even in a weakened state.

Comments-Coming into this show I had a lot of changes in my life including losing all my training equipment 2 months before the contest so I was unsure how I would do but I came in with a top 3 expectation and everything else was bonus. I battled for this win and I came out on top. Proud to be America’s Strongest Man under 105Kg!

Years competing: 4-5, I did a contest in 2006 but then had a wrestling season in college so I was not training for another 9 mo.

Other sports involved in: Wrestling, Football, weightlifting, crossfit, I seem to pick up sports quick and love to be active.

Favorite Bands: Sublime, Pepper, 3in of blood, Children of Bodom

Last book you read: Survival of the Sickest, By: Dr. Sharon Moalem (Good book for people who are wholistic learners and like to know trivial facts)

Quote on the state of our sport and where it’s going: I have none, I hope our sport catches on and I will do my best to preserve the sport as pure and entertaining but other than that I have no predictions.

Do you have any collections, if so, what are they: Nationals trophies…. HAHAHA no, I collected cards as a child but other than that no collections.

People would NEVER guess this about you: I worked as a para-educator in a special needs program for 3 years.

If you are on an deserted island, what food, drink, compact disc and
magazine/book would you want: Endless Hawaiian pizza, Milk, NOW THAT IS WHAT I CALL DANCE, and several books detailing how to survive on a desert Island (including how to generate electricity and how to make a CD player)

Give us your most embarrassing moment: I dont embarrass easily but I do suppose I was a little embarrassed when I could not complete the frame at the Arnold in 2011.

Tell of most extreme conditions you’ve ever dealt with, either in training
or competition: 2009 Nationals was downpoor for the last two events (sanbad carry/sled drag medley and stones)

Favorite event: I have none. They are all my favorite!

Best event: I am not sure I have a best… but Stones I suppose

Advice to beginners on getting into strongman: Find a group to train with and enter a contest soon. the contest will tell you what you need to work on and getting defeated will inspire you to become better even if you are the best in your group. Acquire equipment and befriend a welder/fabricator! Work hard and physical strength comes after mental strength so set a course and do not give up!

Give us your predictions on the year 2012: An American resurgence in the sport and a growth of the sport. Maybe more media coverage (I hope)

Strongman you admire the most: Kaz and JPS!

The persons responsible for making me the person I am today: Everyone I have ever talked with or came in contact with. I feel I have had a lot of help in getting to where I am today but as for who is responsible for me, I feel I am. If you take a hard look at life you will realize that no one is there for you the whole time. Some people may find this dis-concerning or depressing but I find it motivating and invigorating. I think everyone is responsible for themselves and there may be people who inspire or help to right the course in someones live but I feel the individual is responsible in the end for who and where they end up in life. To put it plainly someone can have all the advantages in the world but if they do not work hard nothing will come of it, on the other hand, someone can have no advantages and have to battle adversity for years but in the end that person will have made it where they wanted to. In other words “Hardwork beats talent when talent doesn’t work hard.” I do have big thank yous to my mom, dad, Ray, Feist, and Higa.

Defining moment that made me get into strongman: I used to watch strongman on TV as a child and say “that is not that heavy! I am young and I can almost do that!” I said that on several occasions to myself and then in a moment of clarity I said “Put up or shut up…” So I contacted a promoter and got to a contest, got worked over by all the big guys but I did not care. I got whooped again at my second contest as well but after that I seemed to get a better grip on the sport.

Defining moment in your life: Everyday!