First things first, let me apologize for the delay in getting this second installment to you. I realize that a lot of folks have been waiting for it and I regret the fact that it has taken me this long to deliver. The unavoidable reality is that due to the prodigious undertaking of moving 300 miles from my home and handling the preparations for opening my athletic training facility, I have been absent from most other activities.

To refresh yourself on part 1 of this series, check out SPEED STRENGTH = SWEDE STRENGTH

What is so great about using chains?

I mean, sure, they teach you how to perform a movement in an explosive fashion. They teach you to accelerate from the start of the lift since the chains make it more difficult at the top of the lift (where it's usually easiest).  You're certainly going to benefit in this department, to a degree, like you would training with bands.  However, bands are much more effective for providing this type of resistance. So why would anyone ever train with chains?

Here's why I love them!

Chains are chaotic. Unlike bands, which provide only a constant, increasing, tension; chains are free moving. The weight of the chains, themselves, provides the increase in tension. They can swing a bit, pulling you forward or backward during the eccentric portion of the lift; they force you to adapt and stabilize, dynamically. Chains don't always fall the same. If you have them set up right, the bottom links will slide a bit at the lockout, changing the way they fall on the next rep. They are very effective in this way for providing a chaotic variable in resistance and forcing muscles to accommodate for it throughout the movement. This variable resistance creates a demand for higher motor unit recruitment efficiency (think speed), which can increase the rate of force development. I would love to see some studies done, involving electromyography (EMG is a technique that records action potentials from an entire muscle) or Nerve Conduction Velocity testing, in conjunction with this way of training, but I don't believe any have been done. So, while the scientific jury is still out on how chains increase lift speed, there is empirical evidence that it begins immediately.

For example, Louie Simmons and other lifters at Westside did an experiment which suggested an immediate increase, even on the same day, in the same workout [1].  I've experienced these same phenomena; observing that on the fifth or sixth working sets with chains (and even a final set without chains), during speed training, performance was improved and, in fact, faster than the first two sets, which were performed with lighter weight. This increase is significant and not comparable to that of speed training without chains. How is this happening? As I said, we cannot be certain exactly the mechanism. It is likely, and I believe it to be a result of improved nerve conduction velocity and enhanced motor unit synchronization... very much the same as Verkhoshansky's Post Activation Potentiation, which he explained with simple common sense:

‟Imagine lifting a half-full can of water when you think it is full. The excitability of the CNS responds in such a way that  the water literally flies into the air because of the force applied."

Now that we understand why someone would choose chains as an accommodating resistance device, let's look at the types of lifters who will benefit from using them in this way, as well as which types of chains should be used for each group of lifters. Finally, we will move on to the correct way to set up and use them.

In my opinion, chains aren't for everyone. They are a good way to get someone started off using accommodating resistance; they are a good change of pace for an experienced powerlifter and useful as a means to maintain speed strength while taking a break from bands, if one feels they are in jeopardy of reaching an overtrained state... but mainly, chains are going to be used for speed work with male lifters of a lower to medium strength level or female lifters. As I stated earlier, bands are more effective than chains, but they are also a lot more taxing. Various sizes of chains can be used, down to even the smaller thicknesses, which can be perfect for someone not strong enough to demand the use of bands; for example, a woman. Below I will list some general guidelines I use to determine whether or not chains, bands, or any accommodating resistance should be used. 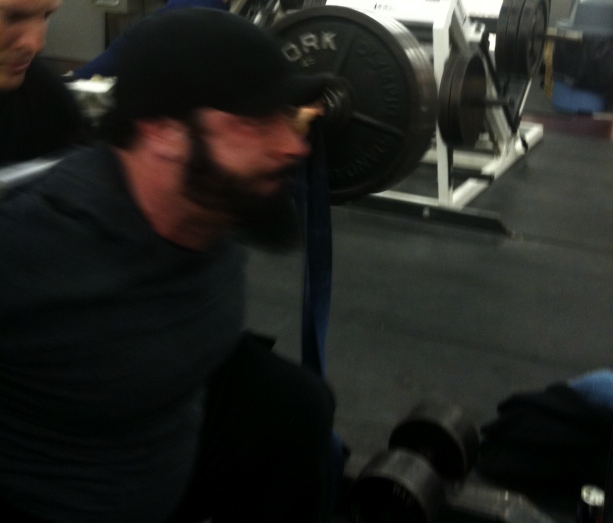 Now, on to the correct type of chain for each individual. The basic set up for bench press and squat is going to consist of two different types of chain, used together to produce the desired effect. The first is a thinner ‟feeder chain" which is used to hang the more important business of the thicker ‟load chain" at the correct height in relation to the floor. (see picture) The feeder chain should always be very thin and weigh a total of no more than 2.5lbs per side. For individuals with lower strength levels, the load chains  may be as small as the feeder chain. While for stronger lifters the load chains will weigh twenty pounds per length. For the deadlift, set-up is a lot easier: no feeder chains will be used. The load chains will simply be draped evenly over the middle of the bar, or at both ends. For the applications where a feeder chain will be used, a good way to make sure that you have them set evenly (and to save time when setting up next session), count how many links down you attach the adjustable link and use this number as a compass-point. The correct setting will usually be near thirty links down for bench press. Once you have found the right setting, drape the load chain evenly through the feeder, as shown in the picture below.

Some people say half of the load chains should rest on the floor when the bar is at the top of a lift, I disagree with this. If the chains are set up in this way, the bottom of them will never change position, which is a thing to be desired. As I said before when the bottom  links move, they will never fall the same way, which will force you to adapt. Anyway, the chains will deload the same poundage at the bottom, irrespective of the amount resting on the floor at the top of the lift (assuming the entire load chain is not resting on the floor at the bottom, which it should not be). For our purposes, we want 1-2 links per side touching the floor at the top of the rep: not so much that they don't move, but not so little that they swing all over the place, either.

Let's keep in mind that that our goal here is to increase explosive strength, which for our purposes is the ability to accelerate through the lift. The reason that we need  an accommodating resistance device (like chains) is to give us an increase in the amount of resistance throughout the movement, which allows us to apply maximal force to a lighter than maximal load, moving the bar much faster, without worrying about slowing down towards the end of the movement. For someone just starting out with this type of training, the starting concentric resistance should be set at 40% of their 1RM (one repetition maximum) and it is imperative that the lift be performed at a high rate of speed. That is to say, on bench press for example, the total resistance on the bar when you begin the concentric portion of the lift (with the bar at your chest) should be 40% of your 1RM. For box squats, you would figure for 40% for the resistance when you are on the box; and for deadlifts, the 40% would be calculated for the bar on the ground. As I said, the resistance will increase throughout the repetition. The formula I use to determine the amount of weight from accommodating resistance via chains the first time I have an athlete do these is 15% of their 1RM. Even a 100 pound bench presser can get 15%, using thin chains.

As I explained in the first article, eventually you will be able to use a larger percentage for both the bar weight and accommodating resistance, but please remember: bar speed is king. Never trade speed for a higher percentage. Use your head.

I put together a video of me coaching one of my clients on speed bench with chains. This will give you an idea of how fast the bar should be moving. If it is slower than this, lower the weight.

Next time around, in the third and final installment of this series, we will deal with the issue of bands and how they should be used in an accommodating resistance application for speed work.

Cory ‟Swede" Burns is a Specialist in Strength and Conditioning.

As a Raw lifter Swede has broken the APA/WPA world records for bench press and deadlift in his class. This was done at his first sanctioned meet. Swede coaches and develops programming for all levels of athletes and is available for consultation online via swede-strength.com -or in person, at his Apollo, Pennsylvania training facility, Keyhole Barbell Club.