A College Kids Journey to an “Unattainable” Dream Rob Kearney!

A College Kids Journey to an “Unattainable” Dream Rob Kearney!

Being a 22 year old collegiate STRENGTH athlete is different from most other “normal” collegiate athletes. “Normal” athletes lift weights to get better at their sport, but lifting IS my sport. This is a foreign concept amongst most coll 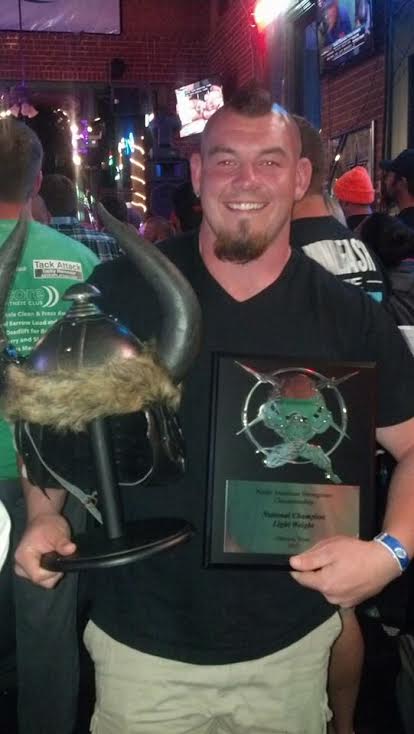 ege campuses, but luckily Springfield College welcomed my passion with open arms. I have been a part of a group of guys and girls who love lifting weights and being the strongest they can possibly be. Throughout my 6 years at Springfield College (undergrad and grad) I have gone through many coaches, gotten tons of advice and been lead in many different directions, and without all of those people and influences I would not be where I am today… one of the youngest professional strongmen in the country.

As a kid growing up, you always dream of being a professional athlete, those dreams went out the window when I realized I was not “slim” enough to play in the MLB and as for football (I played offensive Line) , a college coach once told me, “You can teach skill, but you can’t teach size”. Standing only 5’10’’ and weighing 220 lb. I realized that I would never play high level collegiate football either. Spring of 2009, a senior in High School, I was lifting weights when a substitute teacher (George Rutherford) walked by and I caught his attention. He approached me and said, “Hey kid, you look pretty strong, you should come train at my cross-fit gym”. I gladly accepted his offer and would train at 6am under his guidance and not long after that he signed me up for my first (unsanctioned) strongman contest. I didn’t do great, and I didn’t suck but I was completely hooked on the sport from then on.

I began taking lifting more seriously in college and started to push the pedal to the metal with my training. Giving up the regular college life of drinking and partying to be able to train at 530am in the Athletes weight room and do strongman events on Saturdays at Lightning Fitness in South Windsor, CT. I started to compete more often and realized that I might be able to get pretty good at this whole strongman thing. I first competed for my Pro Card in June of 2012 at the Hartford, CT Europa Platinum Plus competition. In my own backyard and going up against my best friend and arch nemesis Carlos Reyes. It was a dog fight and he edged me out by 1.5 points for the win. I then went to Tunica, MS for the 2012 NAS Nationals. Everyone was looking to me for the win throughout the weeks leading up to the contest, and I expected the same. After a great contest and a 13 point lead going into the final event (my weakest event), I completely shit the bed and ended up 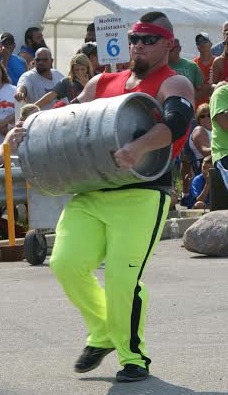 taking 2nd place in the contest to Tyler Stickle.

Looking forward, I realized I needed to change something. That is when I decided to hire Mike Jenkins as my coach. He worked tirelessly with me for the next 8 months to ensure I would be at the top of my game going into the 2013 National Championship… and boy was I ever. I breezed through the contest, barely breaking a sweat and winning by nearly 50 points. After his passing I had no idea where to go with programming and a new coach. I worked with someone for the Arnold and did not perform as well as I had expected to, which is when I began the search for a new coach.

One day I ran into Sam Grammar (a top Highland Games competitor and very good HW Amateur Strongman). He and I were talking about coaching and he said his coach was Ben Lambousis. I have known Ben since 2010 when I met him at the Hudson Valley Strongman Contest that year, and have always been a huge fan of his. I contact him in March of 2014 and said, “Hey man, I want you to be my coach” and that’s where we stand now.

Ben has an amazing business partner, former HW pro James Apostolakos and both of these guys threw more at me in the past 7 months than I could ever imagine. I have NEVER trained the way these guys trained me and it was absolutely a huge change. The name of their system is the “Integrated Tension System” if you would like more info about their programming contact me ([email protected]) and I can send you in their direction. The program included timed sets/ rest periods, aerobic (running) training, anaerobic training, plyometrics and so much more. Without these guys I would not have been nearly as prepared as I was for the 2014 150k ASM contest.

Along with my training program, I contacted Trevor Kashey to take care of my nutrition. I was bloated piece of shit weighing 266 lb. 11 weeks before ASM. With Trevor’s work and guidance I got down to 238 with ease and had the easiest weight cut of my life. I stepped on the scale at 230 lb. and my piss was still clear! This was the first time in my strongman career that I had cut weight without dehydrating, using laxatives or g 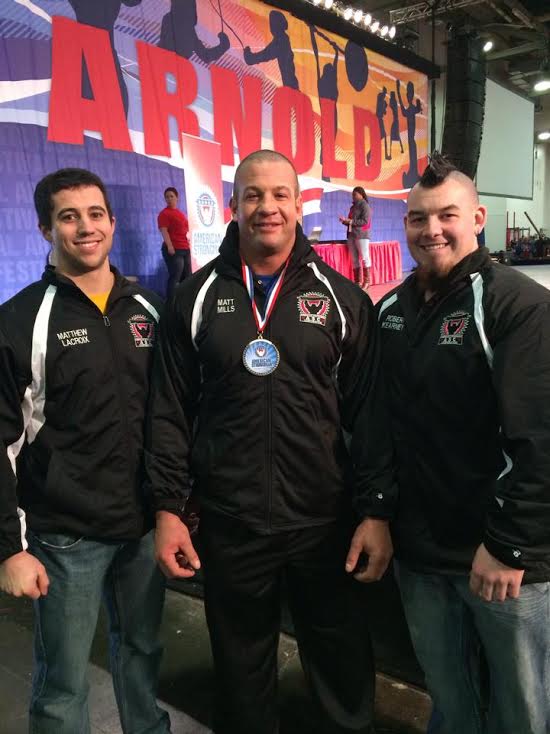 oing to the sauna. If you want to be at the top of your game and look good naked, hit up Trevor now!

Moving onto the contest that completely changed my career… America’s Strongest Man. Going into the contest, I knew I was going to be a force to be reckoned with, and I was going to turn heads. I think most guys took me fairly lightly because of my 4th place finish earlier in the summer at the Mid-Americas Strongest Man contest, but I knew the events at ASM suited me much better. I have been known throughout the years as a good presser and people always watch my yoke runs. Luckily those were the first two events! The press medley was going well all through training… I actually wished the weights were kept the original weights (300# Keg, 325# axle, 210# DB for reps) but when it was lowered I knew I was going to have to move fast and get my conditioning perfect. I breezed through the 205# keg and the 300# axle, and then I got to the DB and my nerves were definitely apparent. I felt all over the place with that thing and actually missed the first rep! After I gained my composure a little bit, I found my groove and hit 7 reps for the win! The yoke was only 800# so I knew the times were going to be FAST! I heard that whistle and took off like a bandit… 8.62s and another 1st place spot.

After the first 2 events I had a 4.5pt lead, but the carry medley was up next… 300# keg for 60’, 300# farmers for 40’ and a 400# duckwalk for 20’. This was my wild card event, I knew if I wanted to be at the top I needed to place fairly well on this event. Going back to 2012 Nationals, the reason I was toasted during the medley which I lost it was because of the duckwalk… so this has always been a mind-fuck for me. I went through the keg and farmers with relative ease, took my time setting up for the duck walk, dropped it 2 times in 20’ and finished around 41s… still a 7s PR from training, but only good for 7th place. After this event my lead went to only 1.5 points… time to step on the gas. 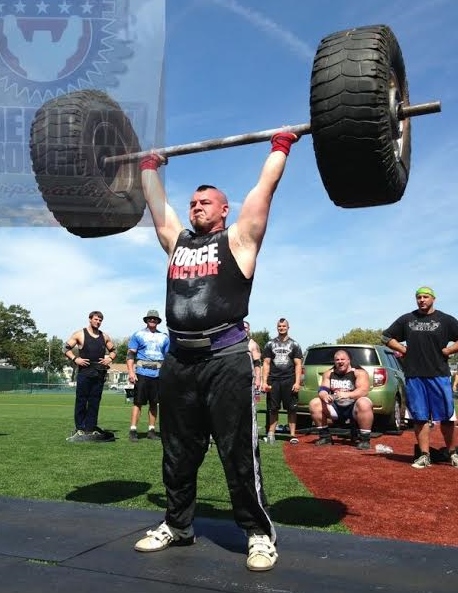 10’’-11’’. In training I had pulled 2, and I knew Sean Demarinis (currently 1.5 points behind me) is a great puller! Watching numerous guys struggle with the bar (getting 0, 1 or 2 reps) I started getting a little nervous. I strapped in, heard the whistle and pulled HARD! The first rep wasn’t too bad seeing as I didn’t have to hitch. The second rep wasn’t terrible and when I set it down all I could think about was #3. I took about 15-20 seconds and went at the bar like a bat out of hell! It was the longest pull of my life, but I locked it out and took 2nd place… to Sean who pulled 4. Now I’m only ahead by ½ a point with the keg loads to go.

Sean said he was going to be fast, I was feeling good and knew all I had to do was beat him for the win. We heard that whistle and began the most intense 17s in strongman this year. As I was walking to the bar with my first keg I heard the announcer say, “And there’s Sean with 1…” as I was grabbing my 2nd keg I hear, “And there’s #2 for Demarinis…” at this point I’m thinking to myself, “how the fuck it this short bastard going so damn fast!” Sean was attempting to load this 3rd keg as I was just grabbing mine and when I looked across I saw he dropped it on the load… my opening to capitalize on! I got to the bar, and started to load at the same time as Sean. And by ½ a second, Sean edged me out for the win.

Overall, it was an amazing contest. To be 22 years old and the 2nd strongest 105kg Pro in America is an absolutely amazing feeling. Competing at the Olympia was a surreal experience and it was amazing to see some of my closest friends and compete alongside them at one of the biggest weekends in strength sports. For me, I am not sure what’s next… possibly heading to China next month, be definitely competing at the Arnold in March. This has been an absolutely amazing ride, but it is only just the beginning for me and my LW Pro career!!!

Discuss This Article in Strength Central