My Journey to a 300LB Overhead Press

My Journey to a 300LB Overhead Press 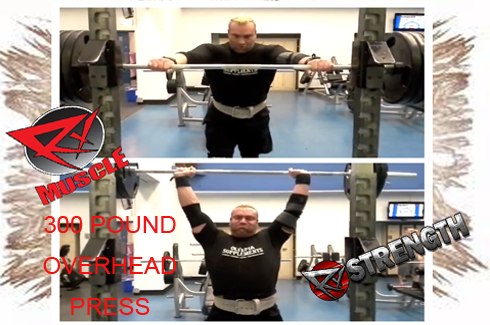 I have been competing in Strongman since June 2012 and am currently getting ready for my third season. In the past two years, I have competed in seven competitions and have done very well with four top three finishes including a first place finish and a trip to North American Strongman (NAS) Nationals in October 2013. Up until Nationals, I thought I was doing pretty good and was able to compete at a high level with other top Strongman. Well, that all changed at Nationals when I found out what strong really is!

You see as a strongman, I am pretty good in all areas except for the Overhead Press. Mine was good, but not where it needed to be in order to compete at a high level. With that said, I did not do as well at Nationals as I would have liked to. However, while at Nationals I talked with 3 times America’s Strongest Man Zack McCarley. From those conversations as well as watching some of other top pressers in the business, I began to develop my own strategy for improving my overhead press. Later that month I returned home and immediately went to work researching and developing my training strategy. In November 2013, my journey to a 300lb Log Clean and Press and 300Lb Axle Clean and Press began.

Let's start off by looking at my starting points. My best Log Clean and Press in November 2013 was 275 lbs. My best Axle Clean and Press was 270 lbs. Knowing that I needed to train on a more competitive level, I needed to at least be able to hit a 300 lbs. press in both implements. I knew I had my work cut out for me. Right off the start I went out and got a Log and an Axle Bar and promised myself that I would only train overhead with the proper implements for Strongman. You see, a common mistake is that most strongman will “gym” train shoulders during the week and then on event training day train Log or Axle, which I used to do. I thought to myself why not train Log and Axle every week while at the gym as opposed to once in awhile on event day.

I developed my program with that concept in mind and every Tuesday became Log/Overhead day and every Friday became Axle/Overhead day. The other thing I needed to address that most guys leave out is TRICEPS, you see the top end of your overhead press is mostly triceps and mine were weak. The other thing I did was research and study what has worked for some of the best Overhead Pressers in the game. Finally, I set a goal; mine was to achieve 300lb press in both implements by New Year’s Eve. Anyways, that’s enough background information; let’s get into the meat and potatoes of this thing.

Using the concepts of the Wendler 5/3/1 Program, I developed my attack plan. I set my max numbers high enough so that I would be pushing myself to the absolute limit week in and week out. The program works in a three-week cycle in which you complete three working sets based on percentages of your max lift. Week one is sets of five based on 65%, 75% and 85%. Week two consists of sets of three based on 70%, 80% and 90%. Finally the last week also known as Personal Record (PR) week is sets of 5/3/1 based on 75%, 85% and 95%.

Now the key point here is when you set your one rep max, set it high enough so that after you finish week three you have a new PR. For example I started with a Log one rep max of 275lb but set my calculations based on 330lb. What that did is put my numbers high enough to make the quick progress I was looking for.

The other key point is that after the three-week cycle is completed, and if you have hit all of your reps, then raise your one rep max and reset your calculations for the next cycle. The results speak for themselves every three weeks as I hit a new PR on both implements.

This was a huge accomplishment for me and a huge payoff after nine weeks of hard work and strict dieting.

Another huge aspect of this process is your accessory training; when I trained Log I used the Log for not just Clean and Press but for Close Grip Bench or Incline Bench. The same can be said for when I trained Axle, I would use the Axle for Floor Presses and Seated Presses. These exercises are all done with heavy sets ranging from 3-5 reps. For example warm-up and then do three heavy sets of five followed by two to three heavy sets of three.

There is one last key factor to address, which is TRICEPS. As I said earlier the triceps are the finisher for the overhead press, so without strong triceps your press will not be as good as you want. The best way to improve this is by doing what I call Lock-Out Presses. Again, these are to be done with the implement on that day. During your press, the leg drive will get the Log or Axle to your forehead or slightly higher, at that point your triceps and some shoulders take over. The lock-out press is designed to strengthen that part of your press. What you do is position the rack so that the implement is placed at your forehead, then set yourself up into your pressing position and with NO leg drive press it to a full lock-out, hold it and then bring it down slowly to a dead stop, reset and press again. For me I did a lot of these starting with just implement and doing a set of 15, then added weight and continued this process adding weight until I could not press it.

Currently, I am at a 305lb Log Clean and Press and hope to be at or over 310lbs come February when I compete for the first time this year! So there it is, for me this is a proven winner! If you’re willing to put the work in, then the results will surely happen and you will be a 300lb presser in no time! In closing, I would like to extend a huge thank you to Jim Wendler for his awesome program concept, as well as fellow Strongmen Zack McCarley, Dimitar Savatinov, Brad Provick, Brian Way and Mike Johnston… these men have broken down my videos and have offered tons of advice, training tips and support that has helped me achieve this goal!