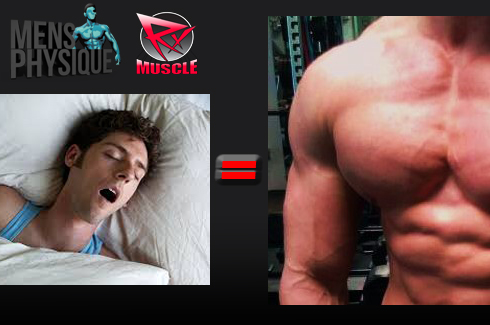 of you who insist on burning the midnight oil and carving into time during which you should be sleeping are doing yourselves a disservice.  When you build up a sleep deficit, not only do you adversely affect your attention and overall energy, you also diminish the potential muscle gains you would obtain if you consistently got a good night’s rest.

A good portion of the slump in muscle repair and growth which occurs from inadequate sleep is due to inadequate secretion of growth hormone (GH).  GH is only secreted during deep sleep, so people who don’t sleep for more than a few hours will spend less time in deep sleep and cause GH secretion to drop.  In addition, there is some evidence that testosterone secretion also drops, creating a double whammy which cripples the body’s ability to utilize fat and build muscle.

Cravings can also become a significant issue with sleep deficits as a result of hormonal effects.  Leptin, a hormone which signals that you are full from a meal, is inhibited during sleep deprivation, resulting in increased food cravings (especially for carbohydrates).  Conversely, ghrelin, a hormone which signals hunger, increases by as much as 30 percent after only a two night sleep deficit.

The body also produces more cortisol during the late afternoon, which is exactly when the body’s production should be tapering down to prepare the body for sleep.  Higher cortisol levels promote deposition of more fat and utilization of muscle for energy during a sleep-deprived state.

When you cheat yourself out of a full night’s sleep, you also deplete neurotransmitters in the brain which are in charge of regulating mood.  The result is irritability and, over the long term, depression, both of which can impact the intensity of your workouts and hinder your efforts to pack on muscle.

Sleep deficits also result in a decrease in alertness and concentration which often translates into submaximal workouts.  And Sleep deficit affects strength.  A study in Ergonomics examined the effects of sleep deprivation on weightlifting, with compelling results.  As expected, there was a significant decrease in maximal lift for bench press, leg press, and dead lift after a three-day sleep deficit was established.

If you are in the habit of cutting into your sleep time, or you practice erratic sleeping patterns which are creating a sleep deficit, try to get into a rhythm in which you get enough sleep every night, especially if you are hitting a plateau with your training.  Once you start getting adequate sleep, you will notice a big difference in your strength and muscle gains.