Micheal Burke Jr, Fort Lupton, Colorado. As the reigning champion and considered by most to have the most prolific grip in the sport today (if not ever in strength sports) Micheal’s story from last year was pretty interesting. Mike had qualified for the Worlds Strongest man 2012 which was being held in Los Angeles, Ca the week before the Americas Strongest Man event in Las Vegas. Mike just missed qualifying for Worlds and asked his wife Maree, what she thought about going to Vegas (it's on the way home to Colorado) and she said lets do it. They packed up the road weary kids and made the trip overnight to Las Vegas. When Mike walked in the door of the Expo, you could hear a collective disappointing sigh from the other competitors. They knew Mike was on top of his game. After two grueling days, Mike came out WAY on top and took home the title. Mikes performances at Giants Live, The Arnold Strongman Classic and now with a 2013 Worlds top 5 finish, make Mike an odds on favorite to take home his second title.

If you can not view this with Firefox, please try another browser. Firefox is working on fixing their YouTube embed issue. 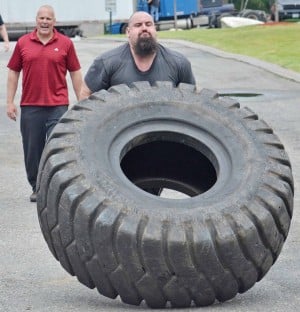 Eric “Eazy E” Dawson, Medford, Massachusetts. Mike Johnston coined Eric the new “Beard Sheriff” in town. Eric sports one of the most epic beards in strongman. But even more impressive is his steady yet rapid ascent into pro strongman. Eazy won his pro card in Shreveport at the Fit For Life weekend as part of the Optimum Nutrition IFBB Pro Show. At 6' 5" and 380lbs, he is another large body that with some quality development will make a HUGE mark in the Strongman world... no pun intended! Eric has been quietly training in Mass as he prepares for this huge showing. He will also give Andrew Palmer and Robert Oberst a run for their money in the beard department. Is there a new Beard Sheriff in town?

If you can not view this with Firefox, please try another browser. Firefox is working on fixing their YouTube embed issue.