After earning my pro card at 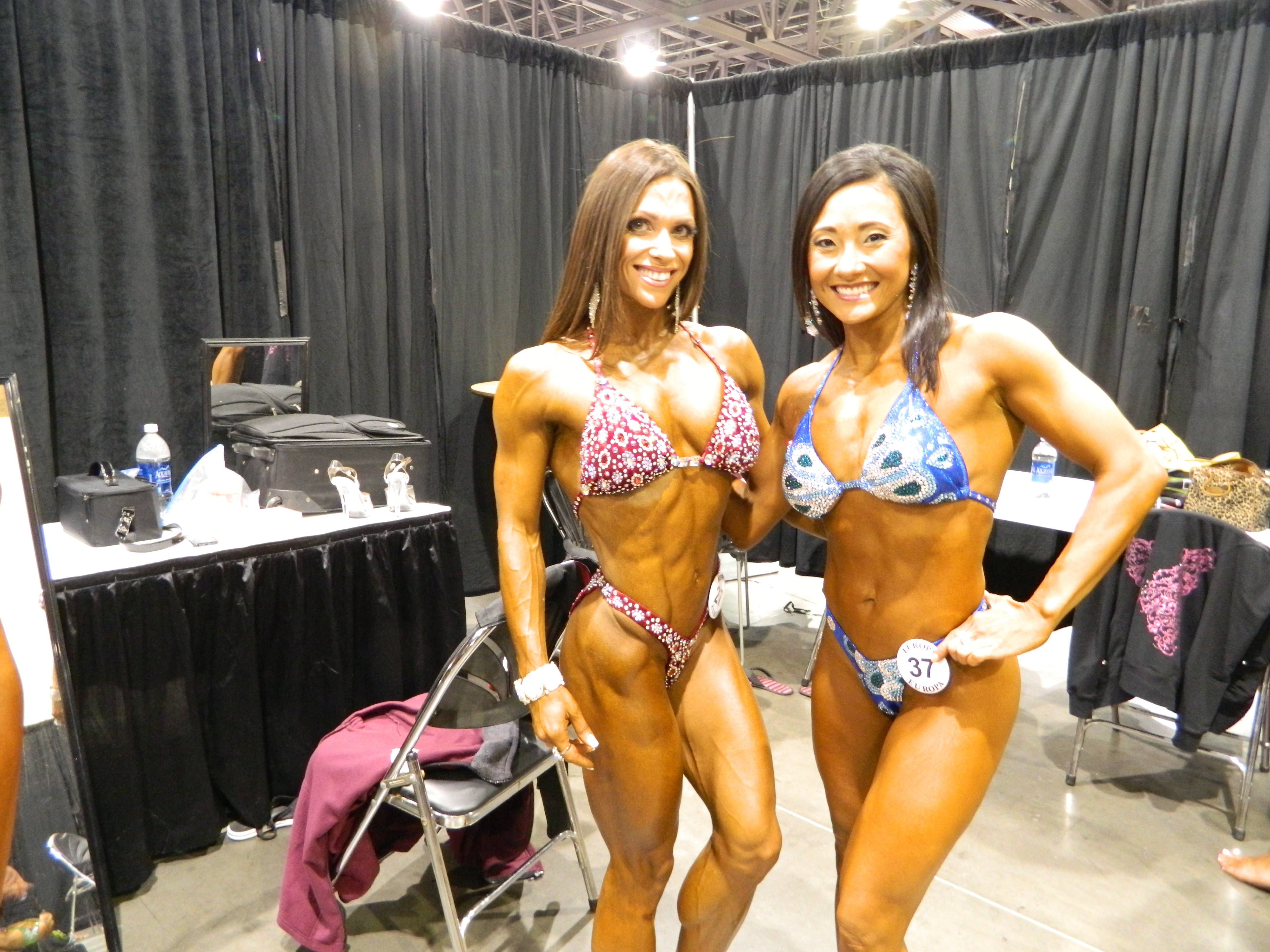 the 2013 NPC Junior USA Championships, I had the privilege of being interviewed by Fitness Pro Michelle Blank.  She introduced herself, but of course, I already knew who she was.  For me, it was the beginning of a whirlwind adventure that has not stopped to this day.  That whole evening was such a blur, but one thing that stood out to me was when she told me, “Welcome to the club.”

It wasn't until this past weekend, when I made my pro debut at the Europa Phoenix, that I understood what she meant.  The experience was better than I ever could have imagined.  From the moment my husband and I arrived at the airport until the moment we left, the weekend was filled with meeting people I have admired for so long, enjoying perfect weather and hospitality, and enjoying great company.

At the airport in Phoenix, we had just retrieved our baggage and were heading towards the taxi stand when we saw a giant, both literally and figuratively.  Eight-time Mr. Olympia Ronnie Coleman was hanging out.  We approached him and nervously asked if we could take a picture.  He obliged, with his infectious and famous laugh.  After taking a couple pics, we chatted for a few minutes and at the end, he reminded me that this experience was going to be fun and to enjoy it.  True words from a legend.

At check-in at the Hyatt Regency Phoenix, we discovered two things. First, the keys were personalized for the event with the logo of the Europa Games and second, we were being upgraded to a high level floor with a view of Chase Field, home of the Arizona Diamondbacks.

After relaxing and eating, we were picked up by Joe Valdez, owner of PT by Joe.  He and his wife Bikini Pro Lisa “TJ” Kelly were going to be taking care of my spray tan, along with tanning fellow fitness competitors, Natalie Graziano, Ashley Sebera, and Babette Mulford.  We piled in Joe's Tahoe and headed over to his gym, where he had a spray tan studio all set up.  After getting all tanned up with Jan Tana, we headed back to the hotel for the athlete meeting.

The athlete meeting was something that I was dreading.  I thought for sure that as a first time competitor, I would be an outsider.  I was reluctant to sit with the group because upon walking in, I saw several current and former Olympians that I had only been able to admire from the 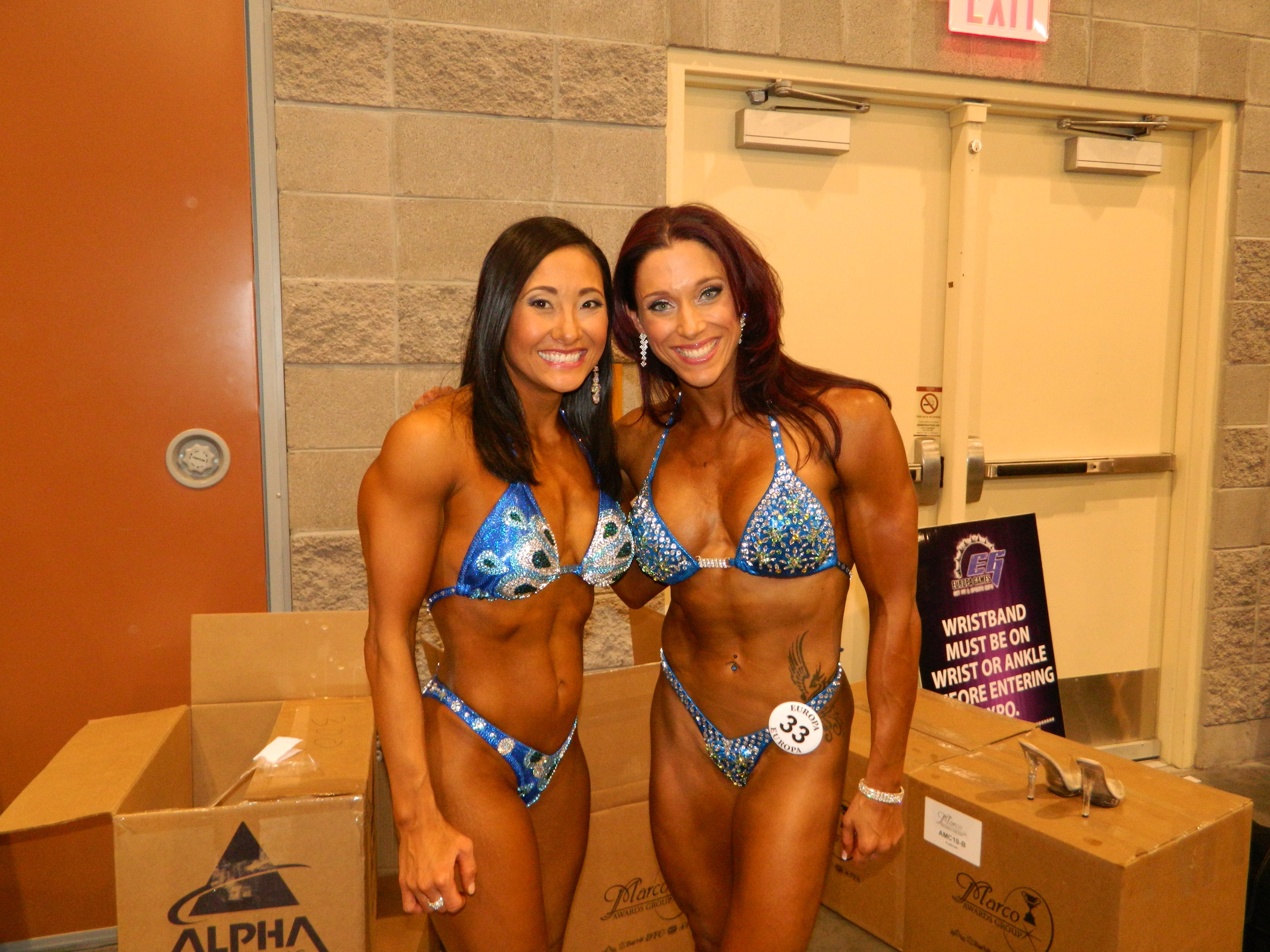 During the meeting, Bethany wandered over and asked if I had signed the card for promoters Ed and Betty Pariso, I had not yet, but when she said, “Hi, I'm Bethany,” I couldn't help but grin.

After getting my number, we went back up to the room and opened up the curtains in the room, the view was magnificent.  The Phoenix lights with the backdrop of desert mountains was such a sight to see.  After eating, I went to bed early, I would be waking up the next morning for another coat of Jan Tana and makeup before heading over to the venue.

The Phoenix Convention Center was filled with vendors and other events going on – a cross-fit competition, a taekwondo competition, and tons of fans and fitness enthusiasts.  I never thought I would get to compete at such an exciting expo.

Backstage, it was such a relaxed environment.  There were only 17 of us ladies, so we did not have to fight over space to get ready or pump up.  I was still in fan mode, so, of course, I was trying to weigh my desire to get pictures backstage versus knowing that they wanted to stay focused in their preparation for going on stage.  I decided it would be better to wait until after the routine round.

Just watching everyone pump up, I knew there was much to learn.  In fact, I did pick up a new way to pump up my shoulders.

After the morning show, my husband wanted something for breakfast, so we stopped by the Einstein Bros. Bagels shop conveniently located in the hotel.  Who else would we run into there, but Oksana!  She was also picking up breakfast for a friend.  I am not sure who was a bigger fan of that moment, me or my husband.

During the routine round, th 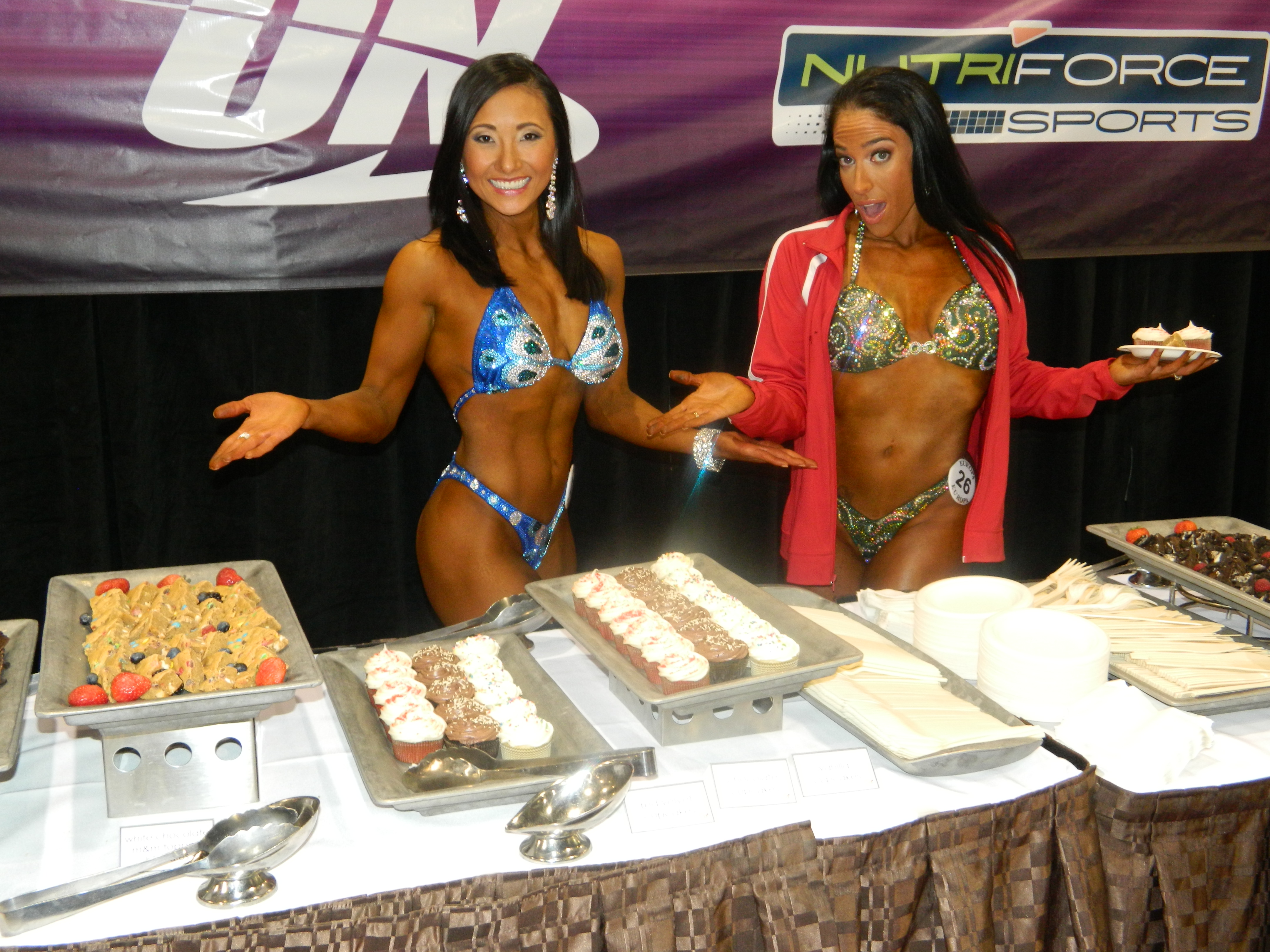 ere was a large television with a live feed backstage.  We got to watch all of the routines.  Since I was at the back of the alphabetical lineup, I was able to watch all the routines off and on between staying loose and stretching.  The routines were amazing. Everyone was athletic, had cute costumes, and entertaining music.  I just watched in awe.

During the awards presentation, all of the fitness competitors gave a special plaque acknowledging our appreciation to Ed and Betty for including fitness in their show.  We also gave them the card that each of us signed and Dan Ray took a beautiful group photo for us.

After the night show, Betty had arranged a dessert bar for all the athletes.  I wandered over after the show ended to snap a few pics of the bar, while trying not to gorge myself.  I think I showed good restraint by just having Betty's famous bread pudding, a cupcake, and a cookie, along with a strawberry.

Reminiscing with my husband over sushi later that night, I knew that all of the hard work and sacrifice was worth it.  We endured so much as a family to get to this point.  I don't know if the sushi was spectacular or not, but the Tiger Roll at Moira was possibly the single best sushi roll I have ever eaten.

I now know what Michelle Blank meant when she welcomed me to the club.  The IFBB is a group of elite athletes who, from the outside, seem larger than life.  When I was on the outside looking in, I never thought that I would be welcome.  However, after competing at the Europa, it is clear that I am a part of a wonderful organization full of athletes that support and love fitness and who welcome all newcomers with open arms.  I feel so blessed to be part of the IFBB.