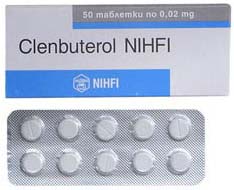 In the last few years Clenbuterol (clenbuterol hydrochloride) has replaced Ephedrine as the drug of choice when it comes to fat loss and contest preparation in general. Clenbuterol is used throughout the world as a bronchodialator for asthma patients.  In terms of fat loss, ‘Clen' (as it's frequently called) is what's known as a "repartitioning agent" - an agent that increases your ratio of lean muscle mass to fat mass.

Clenbuterol belongs to a class of drugs known as sympathomimetics. These drugs affect the sympathetic nervous system in numerous ways.  It's specifically a selective beta-2 sympathomimetic, stimulating the beta-2 receptors, which creates a thermogenic effect, directly stimulating fat cells and accelerating the breakdown of triglycerides to free fatty acids. Animal studies have also shown clenbuterol to be quite anti-catabolic and/or anabolic which obviously leads to its desirability amongst bodybuilders - particularly during the pre-contest phase. However, it should be noted that these studies have been restricted to animal models and there's virtually no human studies showing that clenbuterol has muscle building/sparing properties. This does little to tarnish its reputation as a great adjunct anabolic - used both off-season and pre-contest.  In fact, it might just be the most potent fat-burning agent available to physique athletes today.

Another attractive quality of this drug is its extremely long half-life in the body which gives it an active life of approximately 24-36 hours. This makes it easy to maintain steady blood levels with a single or twice daily dosing schedule. Interestingly enough, Clenbuterol has never been approved for use in the USA (perhaps the drug companies were worried about the abuse potential among athletes).  Despite this fact, foreign clenbuterol is readily available for purchase on the black market.

DOSING AND SIDE EFFECTS

Clenbuterol is a drug where you have to gradually assess your own individual tolerance level. It's advisable to start with 20mcgs upon rising. If the side effects (possible anxiety, shaking and sweating) are not too pronounced, then the same dose can then be repeated later in the day. Dosing is then increased by approximately 20mcg (per day) every 2-3 week.  Men generally end up in the range of 40-160 mcg per day. Women usually find 40-120 mcg per day to be effective. Make sure to never take more than 20mcg per dose.

As previously suggested, clenbuterol does have a fair amount of side effects, most of which will be familiar to anyone who has used CNS stimulants. Along with a slight increase in body temperature (due to increased thermogenesis) users may also experience shaky hands, insomnia, sweating, increased blood pressure and nausea. These side effects usually become less noticeable once the user becomes accustomed to the drug. They are also dose dependant which is why it's always advised to begin with a low dose in order to gauge your tolerance level.

DRAWBACKS ASSOCIATED WITH CLENBUTEROL USE

One of the main drawbacks with this drug is that after a couple of weeks it seems to stop working for most people. This is due to the fact that it can cause a down regulation of the beta-receptors in the pulmonary, cardiac and Central Nervous System (CNS). One way to detect this down regulation is when you no longer feel an elevation in body temperature following administration. This would suggest that the substance is no longer exhibiting a thermogenic effect. At this point increasing the dosage would not be very effective and a break of at least two weeks should be taken before it's used again. This accounts for the popular two weeks "on"/two weeks "off" method of administration. However, much controversy exists in this area. Some say clenbuterol can promote fat loss for approximately 4-6 weeks, though any strength gains can usually only be felt for 3-4 weeks.  While clenbuterol appears to stop working after a few short weeks, the reality of situation is that it never stops working.  It may lose some of it initial potency, but the fat-burning properties do continue, even as long as 16 weeks after its initial use.

There's some science to suggest that Clenbuterol depletes the body of the amino acid, taurine.  Given this fact, users may want to supplement with taurine while cycling clen.

However you decide to incorporate this substance into your program, you must always start low and never go above 8 tablets a day (with a absolute maximum being 200mcgs per day). Monitor your blood pressure and keep it at (or below) 140/90. If it goes above that, or if side effects become intolerable use common sense and decrease the dose.

Many competitive athletes find that the fat burning effects of Clenbuterol can be enhanced by combining it with thyroid hormone (particularly Cytomel). The thermogenic synergism in this instance can be very powerful. When combined, these two cutting agents can even counter the fat-storing effects of strong aromatizing androgens. A clenbuterol/thyroid mix is also common when using growth hormone; it boosts both the thermogenic, as well as anabolic, effects of the GH.