Bros vs Pros 8: The Canadian Colossus

Bros vs Pros 8: The Canadian Colossus 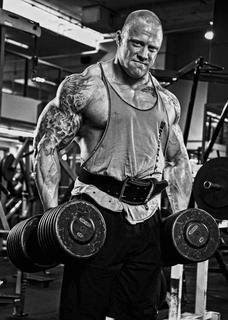 Bros vs Pros has always been a unique vision of IFBB Pro bodybuilders representing hard work and personality along with an unyielding passion for competition. Past Pro's gracing the platforms of Bros vs Pros include Mike Liberatore, Ben White, Andy Haman, Dave Watson, Tazzie Colomb, Nicole Ball, and Jose Raymond. The Newest pro to join this mighty force of combatants is the Colossus Canadian Mike Van Wyck. Mike is not only looking forward to leaving behind the cool Canadian summer to join us in arguably the hottest city America has to offer in Phoenix, Az, but Mike has nothing but overwhelming confidence coming into this event.

Rhode island where he played football for six years, so he has a clear understanding of the American lifestyle. Mike's very first bodybuilding show was in 2005 as a heavyweight where he placed less than stellar; “Uh..... really bad! I didnt know what I was doing and I think I placed like ninth...” Currently Mike stands a sturdy 6' tall and tips the scales well over 310lbs in the off-season and around 270lbs on stage.

Besides being big, Mike has some brutal power to back up his size and weight. “My prediction is that this (BvP8) is going to be brutal! I benched 330lbs for 30 reps in training recently. I have been squatting 7 plates a side for 8 reps in training as well. I think I am up for this task, but you never know who might show up. Some Mighty Mouse (read Derek Farnsworth) could show up and take all the cash!” 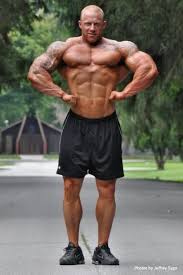 The Canadian National Championships where he won his pro card was a unique experience. “I'm definitely my own worst critic. I had never been to Nationals before, so I didn't really know what was going to happen. I knew that there was another guy there who had been there before and was favored to win. And I knew that if I brought my best package, I could beat him. I didn't know if I was going to have to "pay my dues" and that other guy was going to win just because he was a favorite. I wasn't sure if there were any politics involved.” But. at weigh ins, I always look around and see how good other people look, or how much bigger they are than me. I don't ever see myself the way I really am, so I always think the other guys are bigger or possibly, better. I'm not like some of those guys, though, that you see backstage at a show who are freaking out that they don't look good enough. I'm happy with my hard work, I just don't see myself the way other people see me. I guess that a lot of people are like that.

If previous Bros vs Pros events are any indication, the Canadian Colossus will have his work cut out for himself. Representing the IFBB Pro contingency sits squarely on Mike's shoulders. Kind of like the 405lbs of metallurgical weight that he and some of the best Phoenix area Bros are required to if they want to take home some serious cash and be crowned the newest Bros vs Pros Champion. See ya Friday Big Mike. Better bring your A game!