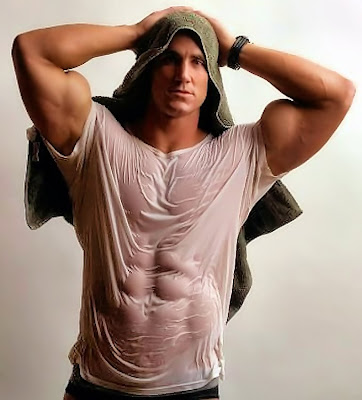 Greg Plitt has appeared on the covers of more than 100 fitness magazines and 25 romance novels in the last four years. He is undisputedly America's No. 1 male fitness model, appearing on the cover of at least one magazine every month for the last four and a half years. Greg won the 2009 Star Physique Award for Best Male Physique on TV. Men's Fitness magazine named Greg one of America's 25 Fittest Americans alongside Lance Armstrong. DNA Magazine calls him one of the 60 Sexiest Men Alive along with Daniel Craig, and syndicated TV show EXTRA named him one of America's Most Eligible Bachelors. Greg is the face of Thierry Mugler’s worldwide Angel Men and Ice Men fragrance campaigns, and is a sponsored athlete for MET-Rx Engineered Nutrition, Under Armour Performance Apparel and Gold’s Gym. Greg has done commercials for Old Spice, Dodge Ram Trucks, ESPN, Under Armour, MET-Rx and PETA. He has also appeared in countless infomercials. Greg has starred on the big screen in The Good Shepherd (with Robert DeNiro), Terminator Salvation (with Christian Bale) and The Watchmen (as the body of Dr. Manhattan). You’ve also seen him on TV in Bravo’s Workout, HGTV’s Designed to Sell and NBC’s Days of our Lives. He is a two-time All-America wrestler and a PRO-rated skydiver with more than 1500 jumps to date. Before taking on acting and modeling, Greg graduated from West Point U.S. Military Academy and served as an Army Ranger as well as a captain and company commander of 184 U.S. soldiers.

Greg shares his fitness background and experience with the world via his website, www.GregPlitt.com, where over 100 videos are available in the GregPlitt.com Members Section, including over 30 instructional workout videos that run about 40 minutes each in length.

Updated weekly with new content, and priced at just $9.95 a month, the GregPlitt.com Members Section is an opportunity you can't miss, if you are serious about making a lifestyle change or taking your fitness program to the next level.

Check out a short preview of one of Greg’s workout videos below, the Top-Side Mass Workout:

Get ready to blow up your upper chest and bring out the detail in your traps and delts, as Greg takes you through his Top-Side Max Mass Workout which is specifically designed to get that separation in the shoulders and upper chest. This 45 minute instructional workout video is not for the uncommitted!