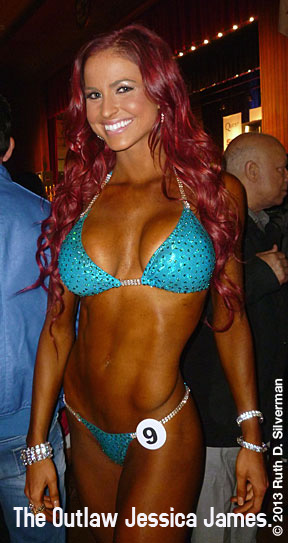 Ms. O and the Outlaw: A Pair of Movers and Shakers

Two very different enterprising ladies have my attention this month. One is a rising bikini star; the other is Ms. Olympia. What could these two women—poles apart in terms of physique development—possibly have in common (besides the gym, of course)? For one thing they've both got spunk, a.k.a. grit, moxie, determination. For another, they don't let grass grow under their feet. Let's start with the newcomer.

This Jessie James Is Two With a Bullet

Meteoric rises are as commonplace as thongs in the fitness firmament. Ditto for hot bikini prospects, but every once in a while a babe comes around who glows with something that's just a little brighter. Jessica James entered her first competition in March 2012 and earned her pro card less than a year and a half later at the 2013 IFBB North American Championships. Despite a disastrous pro debut in Sacramento on November 2, within two weeks she'd zipped up to second, with a quick stop in seventh at the Iron Games in L.A. in between.

Maybe it's the beyond-flaming red hair. Maybe it’s the F-class-tall body and lean roller-coaster curves—or the confidence she exudes onstage, earned through years of competing in cheerleading and a stint as a teen as Miss Hawaiian Tropic. Maybe it's the name, with its reference to a legendary outlaw suggesting someone who's just a little bad. Whatever it is, Jessica James, of Roseville, California, up near Sacramento, is making it work for her.

I got my introduction to Jessie (“I answer to Jessica, Jessie James, Jess, J, James, J.J.…Outlaw”) a few months ago through my "day job" at Iron Man magazine. It was 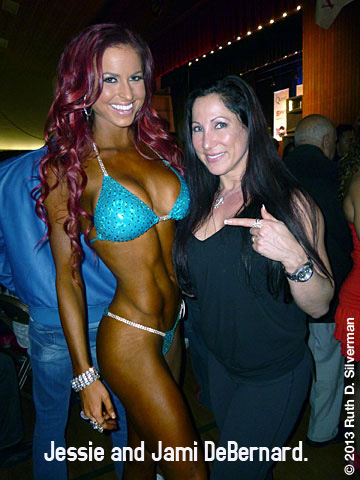 an interview she gave to accompany a photo layout—the girl impressed even before I saw the hot Michael Neveux photos. For one thing, her life story suggested someone who was independent and focused on grownup goals from an early age. She has spent fully half of her 24 years on earth as an athlete and coach.

"I started helping teach stretch and conditioning classes to children at the park and rec center in town with my mom when I was 12 years old," she recalled. "Fell in love with cheerleading, so my mom opened up a cheer gym, where I helped coach teams and tumbling classes as well as competed myself until I was 18. So coaching and being competitive is all I've ever known."

Never much into school, she was home-schooled for a few years as a teenager, which, she said, “just helped me focus on what I was really passionate about, sports and work! I was never popular, was never an outcast either. I was always itching to get out and start my life in the real world."

After high school "I hopped around to different community colleges along the California coast, got my AA degree and got certified as a personal trainer," she said. She also attended broadcasting school in Los Angeles. No longer competing in cheer, she was motivated to train others while making her own transformation, a natural outgrowth of all that came before. "At first I did it to educate myself because I knew I was trying to get fit and healthy the wrong way, and it wasn't working. I became fascinated with my own transformation, which quickly turned into a passion.”

Jessie decided to compete after attending her first NPC show and looked for some expert help before she got on stage. She hooked up with local pro figure star and prep coach Jami DeBernard, resulting in the M.R.—meteoric rise—mentioned above and a partnership in the competition team FitBody Fusion. "She's become a dear friend and mentor I trust wholeheartedly," said Jessie. "I have her to thank for helping me reach the success I've been having this year."

Success, yes, but what about that disastrous pro debut? A last-minute decision to wear a neon-yellow suit ("I can be impulsive.") led to her tanking in the callouts and a tied-for-last-place decision. "It didn't complement my look with my red hair—washed me out," she related. The judges told her to change it and to come in a pound tighter, which she took to heart, resulting in her leap out of the basement the following week. Her feedback after that show ("don't be so jerky onstage, and have a better tan") was "also advice I could work on in a given week," which she happily did, that time leaping into the runner-up spot at the final contest of the pro season. Not surprisingly, she plans to compete early in 2014 and ride that momentum into an Olympia qualification "sooner than later. You betcha."

A final question: What does this passionate young woman like the best about competing in bikini? "The training and the hourglass figure it has given me," said Jessie. "I'm not naturally a curvy girl, so it gives me a challenge to sculpt my body and fight my genetics. And, obviously, the personality we get to show onstage."

Make no mistake: This one's got personality on and off the stage. “You betcha.”

Iris Is Branching Out Again 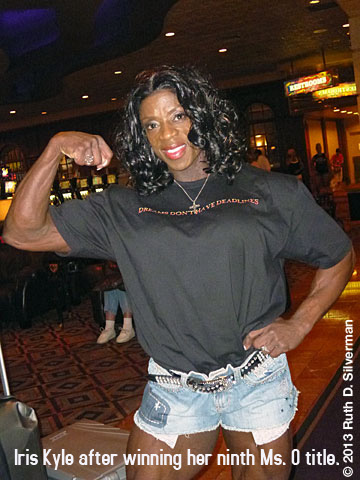 fascinated by the idea of Iris Kyle owning a restaurant. Maybe because, in my mind, the determination, drive and total tunnel vision that go into building a body like Iris's cannot permit food to be thought of as anything other than fuel. So the announcement that she and her friend Hidetada Yamagishi, the IFBB pro bodybuilder, would be celebrating the grand opening of their Bodi Cafe in Las Vegas in late October and that most of the muscle royalty who reside in Sin City would be there caught my fancy.

When the place turned out to be a super smoothie bar and purveyor of clean-but-tasty snacks and meals, along with select supplements and workout gear, located just inside Vegas's tony City Athletic Club, things started to fall into place. I recalled the zeal with which the nine-time Ms. Olympia has built her Visalus Body by Vi Challenge network and the picture was complete. Iris Kyle is one ambitious woman, and this was another of what she called “baby steps” to building a future.

A recent late afternoon found her minding the store at 7980 West Sahara. “Of course, I’m here,” she said when I expressed mild surprise. “When you open a new business, you want to be there as much as possible. You want to make sure everything’s going all right.”

The idea started as a juice bar with some food. “But then we decided to add the top four supplement companies that we believe in and use.” Workout gear and other accessories were logical additions. “Everything that belongs in your gym bag is going to be in this store.”

The Bodi Cafe “we” consists of Iris, Hide and Chris Bonnet, “a dear friend of 10 years,” who takes care of the day-to-day operations. Iris lives part-time in Vegas, and as she said, likes to keep an eye on things—and to talk up the good things to be had at the Bodi Cafe.

“Our most popular shake is the ‘Ms. Olympia Bomb,’” she said, ticking off the ingredients—oatmeal, whey protein, almond butter, honey granola, strawberries, blueberries and banana—and telling me that I will love it. It’s “all clean,” she concluded and said that she herself had continued to have it up to two weeks before the Olympia.

The various drinks are full of vitamins and minerals, along with other 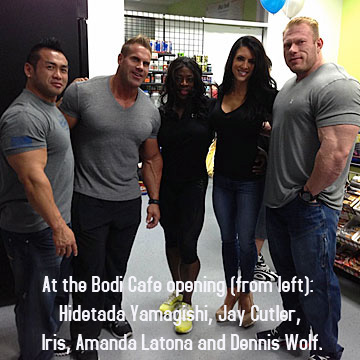 supplements hard-training athletes might gravitate toward, like glutamine. “You come here, you’re gonna get fed,” she said. The actual food, takeout meals such as chicken and salmon plates and snacks, comes from the company that prepares all of Ms. Olympia’s meals, GoFitMeals.com.

Once we'd covered the Bodi Cafe Basics, I had to ask about Yamagishi, in whose company she seems to spend a lot of time. “Are you really just buddies?”

“How did I know you were going to ask that?” she replied, roaring with laughter. Then she acknowledged, “Everyone saw us holding hands at the Olympia.”

In fact, that episode had set off a lot of speculation, particularly among my girlfriends on “The Fitness View,” who sliced it and diced it to smithereens looking for hidden meaning on the most recent episode, which had hit the Internet about a week before my conversation with Iris.

Another question that had to be asked—her thoughts on the Arnold Sports Festival’s dropping the Ms. International competition in favor of men’s 212 bodybuilding?

In a word, she was disappointed. She disagreed with “the assumption that it’s not making money,” pointing out that the women all have large fan bases and that in any event the weekend was successful enough “to give the ladies another avenue to show their talent.”

In the meantime, she’s looking to making an Olympia-sized success with her new endeavor and see where it will take her. “I was always a person who was smart with the money I made onstage, which was not very much,” she said. Now, she enjoys taking advantage of opportunities she believes in.

So come on down if you’re in Vegas—you don’t have to be a member of the gym—and check out the Bodi Cafe. You may find that the Ms. Olympia Bomb energy drink really is da bomb.