The 2014 Olympia Weekend has come and gone, along with the myriad predictions made by han 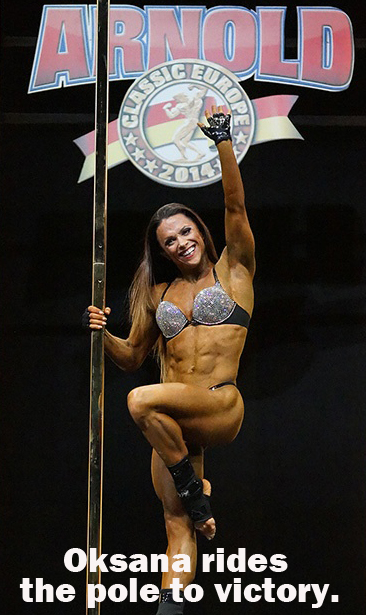 dicappers amateur and professional that dot the media landscape before the show. It's like one of those How-Much-Do-You-Know-About (fill in the blank) quizzes your Facebook friends are getting 100 percent on, except no one gets scored—and no one is called to account for not getting it right. My own picks in the women's divisions were immortalized on the "The Fitness View," on September 10, and in the October ’14 Iron Man. Plus, I ’fessed up to some things during our live Olympia play-by-play on Friday night—with Dave Palumbo, Chris Aceto and Lonnie Teper—at RxMuscle.com, so I can't hide.

The fact is, once you go on record—whether it's in the media or a bet with a friend—you've got an extra little stake in the action. Admit it, you had your picks ready. How well did you do? I got three out of five in the women's divisions, plus Phil Heath and Flex Lewis, were like free points, right? I incorrectly picked Sadik Hadzovic to win the Men's Physique title, so that's five out of eight, with only one teeny-tiny serious mistake.

I'm not ashamed, though. I've done worse. Here are just a few notes on the contest, the predictions, and the future. We’ll start small and work up in size of physique. 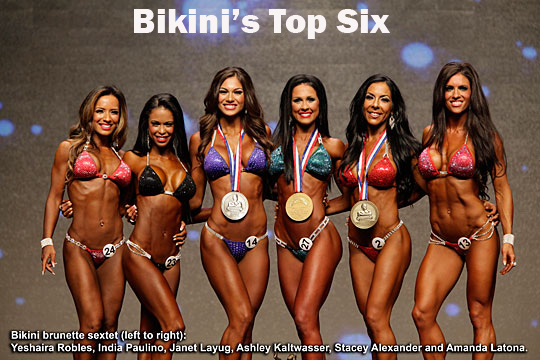 one wrong but thought the judges got it right. Defending champ Ashley Kaltwasser looked radiant, her beautiful lines all highlighted, her conditioning in but not too hard. This year the decision was unanimous, and Kaltwasser deservingly became the first bikini athlete to repeat as Olympia champ, as well as the second to win the Arnold and the Olympia in the same season (after Nicole Nagrani in 2011). My pick—2013 runner-up by a single point Yeshaira Robles—looked small and "off." After peaking multiple times this spring, the Pittsburgh and New York Pro winner just couldn't hit the bull's-eye one more time.

I did correctly name ’13 NPC National champ Janet Leyug as the newcomer most likely to do well. The winner of the Flex Bikini Model Search at the 2013 Olympia, as well as the 2014 Miss Hooters International, she had all the equipment, including a gorgeous exotic brunette look reminiscent of her sister, Monique Minton Ricardo, a fan-favorite Figure and Bikini star of just a few years ago. Head judge Sandy Williamson put Leyug in the center of the first callout with Ashley and left her there while she moved everyone else around them. At that point it was easy to predict Janet's second-place finish, with Stacey Alexander (not at her absolute best) third, Robles fourth, Amanda Latona fifth and India Paulino rounding out the top six. Why do some competitors make it to the top but not the very top at this competition? The winning combination is symmetry, proportion, curves, conditioning and shape, shape, shape.

I can't remember which of my male colleagues on the Webcast noticed it first, but blondes are clearly not having more fun in the Bikini lineups these days—all of the top six have long, dark tresses. In fact, the highest finisher of the blonde persuasion was Tawna Eubanks in eighth. The guys seemed to think that they all copied India, which made perfect guy sense but could not be remotely true. It's definitely a subject that deserves further study.

2015 season update: Kaltwasser won the Korean Pro on September 27, with Latona in second and Paulino third. Paulino got even with a win at EVLS Prague Pro on October 4.

There were no problems for blondes in this division, and it was an eas 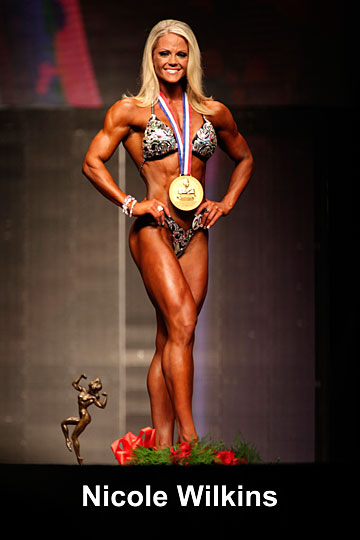 y prediction: Nicole Wilkins would win her fourth—but not fourth consecutive—Figure Olympia title. Candice Keene would have had to duplicate the physique she displayed at the Figure International and Australia Pro in February and March to really challenge. (She didn’t quite.) Wilkins, who passed on competing earlier in the year, would have to look the way she did last time: more muscular and toned than anyone thought Figure would ever become but still Barbie gorgeous. (Bingo.)

Props to my “Fitness View” buddies Brook Cook and Tennille Ray, who insisted that Latorya Watts and her hourglass figure would make it to a top spot ahead of the highly ranked Candice Lewis, also the owner of an hourglass figure. Watts didn’t beat Lewis, who was third behind Nicole and Candice Keene, but she did make the unheard-of leap from relative obscurity (almost the last to qualify) into fifth place.

Brook and Tennille also correctly predicted that Gen Strobo, veteran of four previous Figure Olympias and another blonde, would elevate into the winner’s circle to earn her highest placing ever, sixth. Ann Titone, everyone’s pick to move up to third, had to settle for fourth, which was still moving up—from sixth last year.

And now for that tiny serious mistake. The fact that I was not surprised when I learned, upon my arrival at the Orleans Hotel and Casino in Las Vegas, that Adela Garcia was not competing (and would announce her retirement at the finals) do 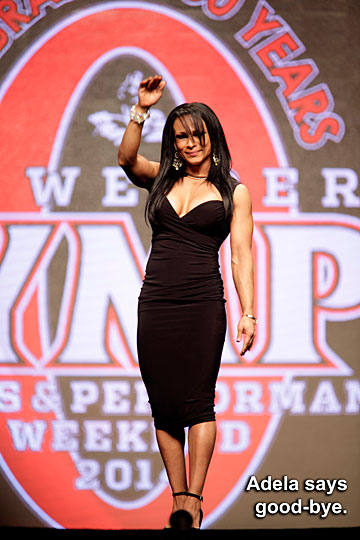 esn't get me off the hook. I didn’t actually know in advance. In fact, I may have to turn in my laminated pundits credentials for predicting that Adela would win the Fitness O again. Even so, I stand by my statement that the “all-time Fitness champion” had another title-worthy performance in her.

The ascension of Oksana Grishina to the throne was a foregone conclusion, and the Southern California transplant, originally from Kalingrad, Russia, didn’t disappoint. She stole the audience’s heart with a “Flashdance”-themed performance that was more of a traditional Fitness routine, with stellar dancing and strength moves, than some of the dramatic turns we’ve seen from her. Technical difficulties, it turned out, kept her from doing the number as envisioned—with a grand finale demonstrating the pole dancing skills that helped her sweep the Fitness International. A week later, with pole in hand, she notched her second victory at the Arnold Classic Europe, in Madrid, winning the physique round as well as the routines. For those who were surprised by that last part—Oksana has made the most improvements possible to her physique, but she doesn’t have an ideal structure—it’s not the first time. Two years ago at this contest she beat the better-proportioned Adela in the callouts to take the title.

Also not hard to predict was that Fitness stalwart Regiane Da Silva, who presented the best body and most creative routine of her career to take second at the International, would continue that trend. She did, earning the runner-up spot to Oksana at the Olympia as well as the Arnold Europe, and leaving Tanji Johnson, Bethany Cisternino and Myriam Capes to fall in behind in the betting stakes for 2015. 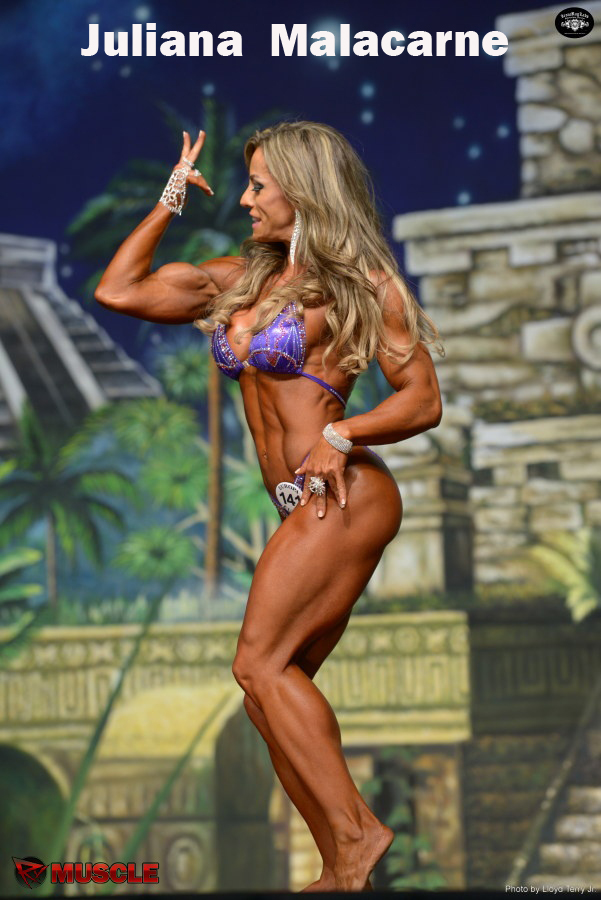 obvious that if Juliana Malacarne could bring her special blend of muscle and curves to the stage without crossing that elusive line of too big and hard for WPD, she would become the Olympia champ. That’s exactly what happened, and I was shocked (shocked) to find myself defending that choice to my day-job boss, IRON MAN Publisher John Balik. He couldn’t understand why Dana Linn Bailey, who duplicated her condition of 2013, when she became the first WPD Olympia champ, hadn’t won. Plenty of fans and at least a couple of the judges agreed with him, as Juliana’s margin of victory was just three points.

Tycee Coppett’s third-place finish was the panel’s only unanimous decision. Karina Nascimento looked better at the finals on Saturday than she had the day before at judging to land in fourth, while Sabrina Taylor slid into the fifth top just a point ahead of Mindi O’Brien. Taylor, who was 13th last year, gets props for the greatest and most deserved upward trajectory.

The first Pro Women's Physique show of the new season will be the Titan's Grand Prix in Culver City, California, on October 18. It will be interesting to see who shows up. 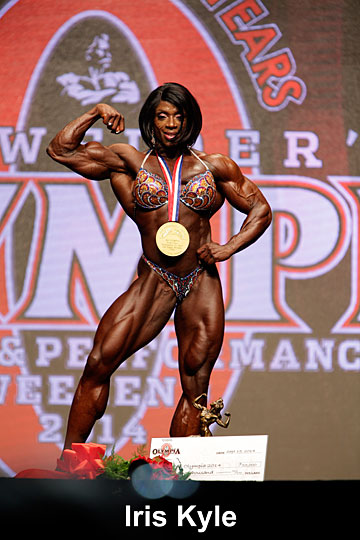 itle. The idea that no one, male or female, in any of the divisions, was likely to duplicate that feat, ever, was just too delicious—and Iris was the gal to make it happen.

When she first appeared, upstage center in the big O that’s a fixture at the women’s judging, any doubts were blown away. A lights-out, game-over champion was taking the stage. Sure, you can give runner-up Alina Popa the advantage in this shot or that shot or debate whether Kyle was at her all-time best, but the polished package Iris presented would not take a backseat.

One prediction I wish I’d made: that Alana Shipp, who turned pro with a class win at the ’13 NPC Nationals, would be the newcomer to break into the winner’s circle with a fourth-place finish. Sporting beautiful symmetry and a whole lot of well-proportioned muscle, Shipp sailed into an impressive Olympia debut.

Kyle’s onstage announcement that she was retiring from competition was also not a surprise. For one thing, what did she have to prove? 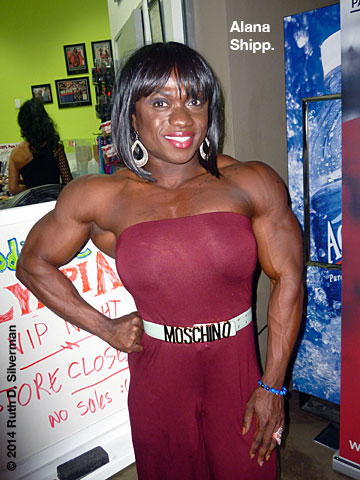 For another she seemed to have settled down in Las Vegas, where she and Hidetada Yamagishi opened a juice-and-healthy-munchies bar inside the City Athletic Club a year ago. Planning for the future, I thought. Sees some writing on the wall regarding women's bodybuilding, and, well, what does she have to prove?

Kyle, like Garcia, made a classy speech and exited the posing platform. Also as with Adela, I'm looking forward to the next act.

As there are no more women's bodybuilding contests scheduled for calendar year 2014, we'll have to wait with baited breath to find out what the future holds for Iris's sport—on the 2015 IFBB Pro Schedule and in general.