The question: What's the di 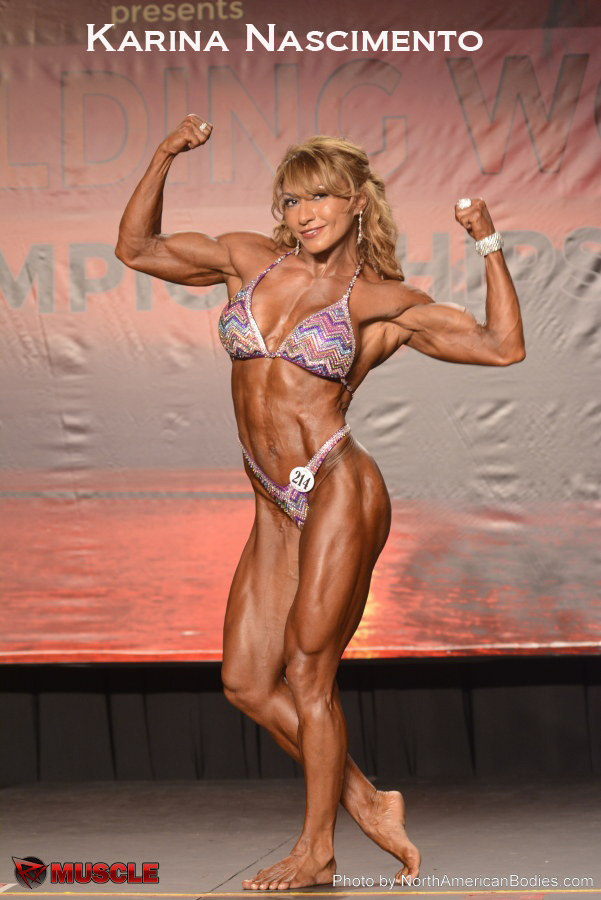 fference between a women's bodybuilding physique and a women's physique body? The answer recalls a famous Supreme Court quote about pornography: I can’t exactly define it, “but I know it when I see it."

The fortunes of so-called smaller women bodybuilders have been inconsistent over the years. Juliette Bergmann's reign in the early 2000s, in which she won the lightweight title at the Olympia three times and beat Iris Kyle for the overall in 2001, is a notable exception, but it's been a while since a smaller flexer made it into the top five at the O.

The advent of women's physique may have looked like the answer to women like Antoinette Thompson and 2000 Ms. Olympia Heavyweight champ Valentina Chepiga, but when the NPC and IFBB introduced it, they were pretty clear that the goal was a sport for bigger figure athletes, women who had a little too much muscle for figure but had that type of body. Still, some bodybuilders have tried it—with mixed success.

Since the dawn of women's physique competition in the NPC—all the way back in 2011—the overwhelming number of athletes have come from figure. On the pro level there's been a steady trickle from fitness as well, and those women seem to be having a better time of it. This year's Olympia list includes Sabrina Taylor (who migrated from fitness to figure to WPD), Tamee Marie (ditto) and the retired-from-fitness Mindi O'Brien. On the other hand, no former pro bodybuilders except Karina Nascimento made it this year.

A quick look at our story so far on the female pros who are coming down—or coming out of retirement—to do physique. Nascimento is obviously the biggest success story, winning two shows in 2012 and one in 2013 and getting eighth a 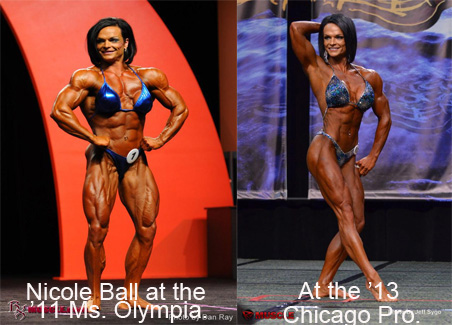 t the first WPD Olympia Showdown last year. A decade ago as a bodybuilder she never had enough muscle, really, to buck the rising trend. She did manage to get third in the lightweight class at the 2003 Ms. International, but she left competition not long after that, focusing on her family, until she started turning up in WPD lineups after the better part of a decade.

Nicole Ball was a more muscular bodybuilder than Nascimento and finished second at the Toronto Pro in 2012. In physique she scored a couple of fifth-place finishes and took third in Chicago last year. The accompanying photos of Ball show a marked difference in the packages she presented in the two sports.

On the other hand, veteran Ms. Olympia star Dayana Cadeau tried WPD in 2012 without success, demonstrating that shedding muscle is not enough. Coming off a brief retirement from competition—or perhaps it was just a pause—she was a shadow of her former self and smooth.

Thompson, a former Team Universe Women's Overall champ, is another flexer who did achieve the right look for physique. The ultimate not-so-big female bodybuilder— 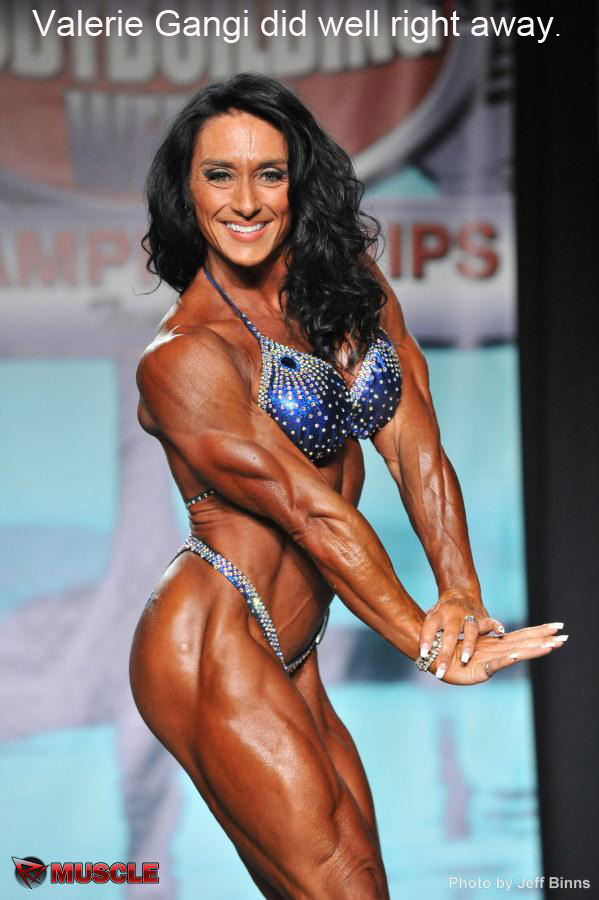 she competed in the Olympia and the Arnold several times—Thompson did decently in the new division. In 2011, as a bodybuilder, she finished out of the running at the Tampa Pro; a year later at the same show she took fourth in physique.

More recently, Valerie Gangi, a bodybuilder who tried figure before coming back in physique, won the ’13 Tampa Pro as well as taking second in Chicago. This season Chepiga and Colette Nelson, the 2004 IFBB World Amateur champ, got their toes wet—with less success. Both came away the experience wondering whether they would or should try again.

A couple of weeks ago in Tampa, Dona Oliveira became the latest noted flexer to go physique. The 1988 Pro World Champion came off the bench after 25 years looking marvelous—but maybe not WPD marvelous. Too muscular and hard was the unofficial word, which is always ironic for an athlete who left women's bodybuilding because she didn't want to get any bigger. Bottom line: Oliveira still looked like a bodybuilder.

“Even with the inclusion of WPD, I had my doubts that I would ‘fit’ in,” she admitted. “My friends and supporters kept reassuring me that I had what they wanted in physique because it was the physique of the ’80s. Even so, my muscles are much fuller."

Despite the personal goals reached, Oliveira was not encouraged by her experience—tied for 16th—and is not likely to repeat it. If she does 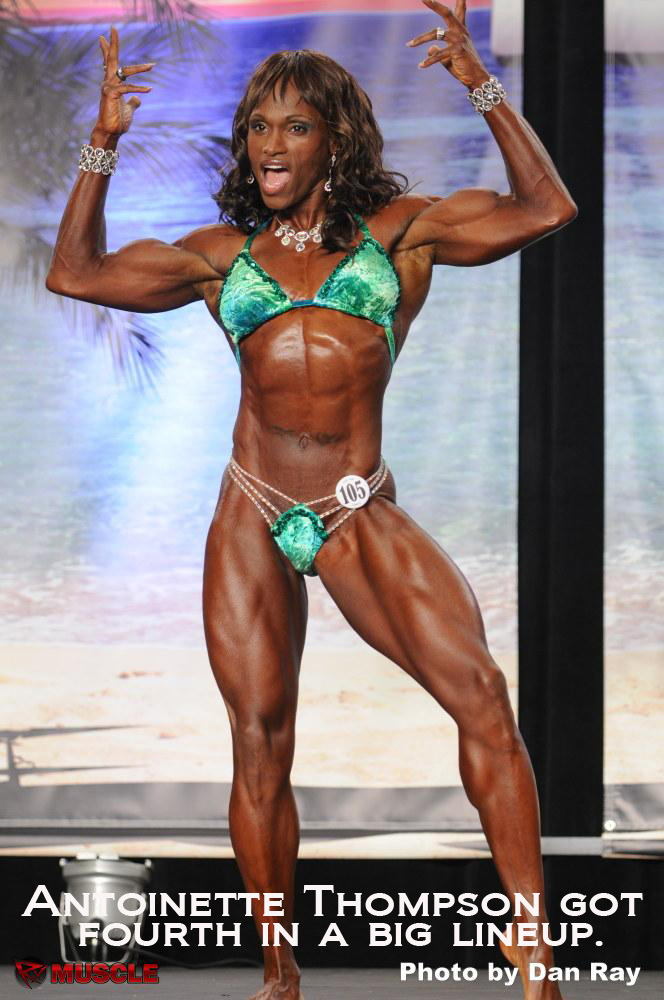 compete again, she said, it will be in bodybuilding.

So, what's a girl gotta do to come down from flexer to WPD darling? I asked the NPC/IFBB's Sandy Williamson. If anyone has an answer on this issue, it's Williamson, one of the officials who helped formulate the newest women's division and the head judge at the Olympia both last year and this.

A WPD candidate, said Williamson, is "someone with nice lines, full muscle bellies—not as thick on their frame as bodybuilders but definitely more than figure. It also includes the overall look and presentation onstage."

What do bodybuilders need to do if they want to come down to WPD? "This depends on how much muscle they carried on their frame as a bodybuilder," she said. "Women like Valerie Gangi and Valentina weren't thick as bodybuilders, so they can make the transition somewhat easier than a bodybuilder that carries a lot more muscle."

What's the biggest mistake they can make? "In the beginning, the biggest mistake is that women think it's okay to be too soft because they won't look as muscular, which is not the case. We are looking for separation, especially in the quads and hamstrings, just not the ripped look with striations."

Should they get ons 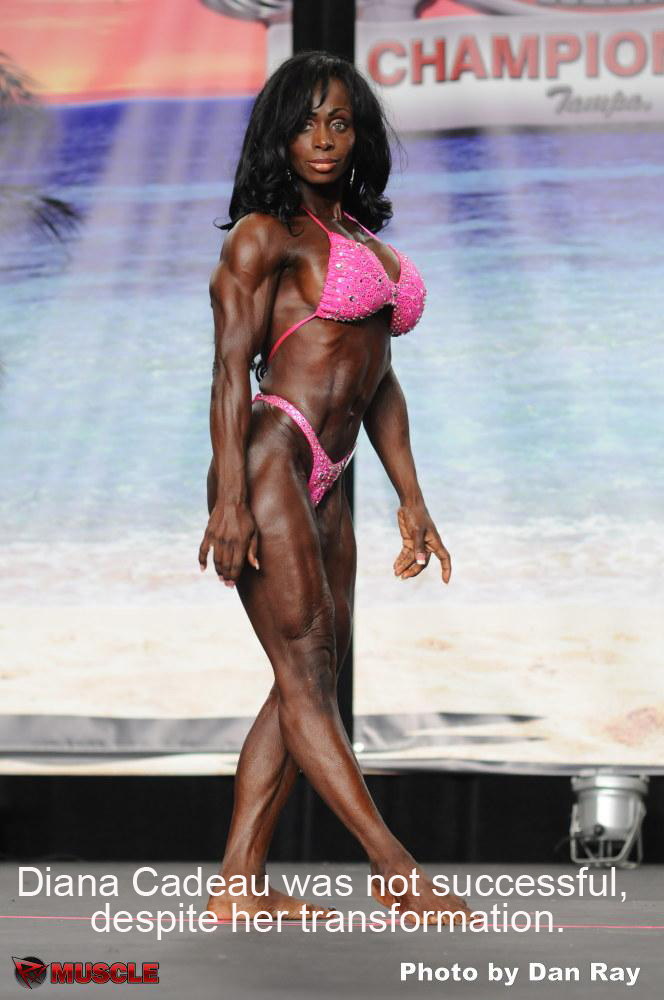 tage quickly to try out the new division, or should they "go away" for a while and make a real physique transition? "Again," she said, "this depends on what they looked like as a bodybuilder. If they didn't do well as a bodybuilder because they were told they needed more muscle, they will probably transition easier to women's physique. For the more muscular women it's harder because their skin has to adjust to the smaller package, and depending on age, it might not have the elasticity to do that."

Straying just a little off topic—and in the process of formulating my 2014 Olympia predictions—I couldn't help getting Sandy's take on last year's contest, in which Dana Linn Bailey became the first WPD Olympia champ. I had to admit, I was surprised at that decision, I said. Dana is an excellent athlete, of course, and very conditioned, but perhaps not with that total-package-perfect shape and proportion that Olympia winners tend to have. What was the thing that put her over the top… over runner-up Tycie Coppett or any of the others?

"Dana's overall package is what did it, at least in my opinion," said Williamson. "When Dana steps onstage, she owns the stage. She di 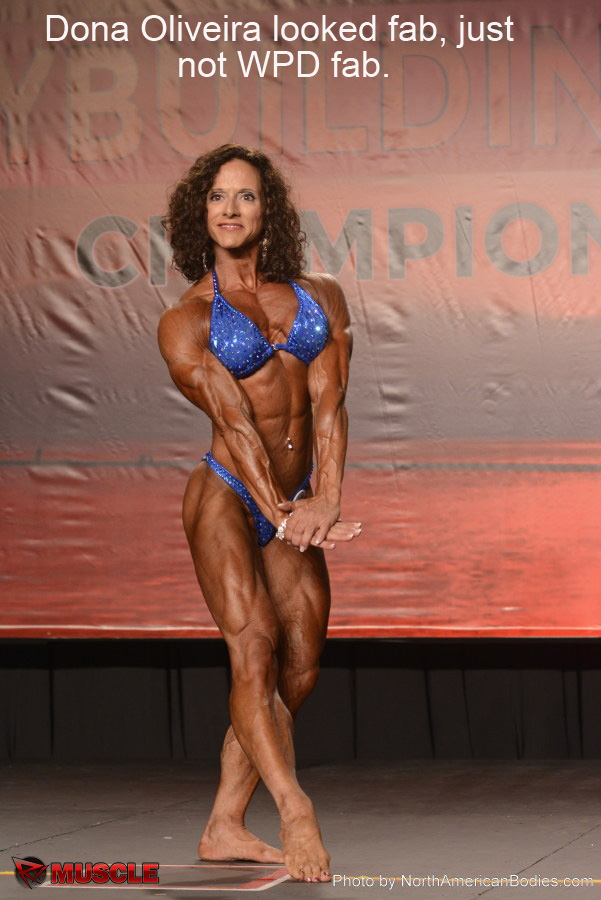 d it at the Junior USA, where she became our first women’s physique pro. Her shape isn't the greatest because she is a little thick in the waist, whereas Tycie had a better V-taper but didn't have the stage presence that Dana had. Some judges liked Tycie's shape better, and some liked Dana's overall package, and so the score was a one-point difference. If Dana had been a little harder or bigger, it probably would have had a different outcome."

Of course, the same could be said for that line between smaller flexers and WPD. The takeaway here is that bodybuilders should not underestimate the task of "bringing it down for physique." Many don’t realize how much hard-earned muscle they will have to shed to make a credible showing. Whether they really want to do that is the ultimate question.