The months of April and May brought an astonishingly fine set of champs and almost champs in the women's physique sports. With shows in multiple cities almost every weekend, it's sometimes tough to remember last week's golden girl or promising newcomer. Here are a few who caught my eye this spring from the hundreds of promising contenders who hit the stage. See if you don't agree that they're worth keeping on your radar as the 2014 Olympia season rolls on. 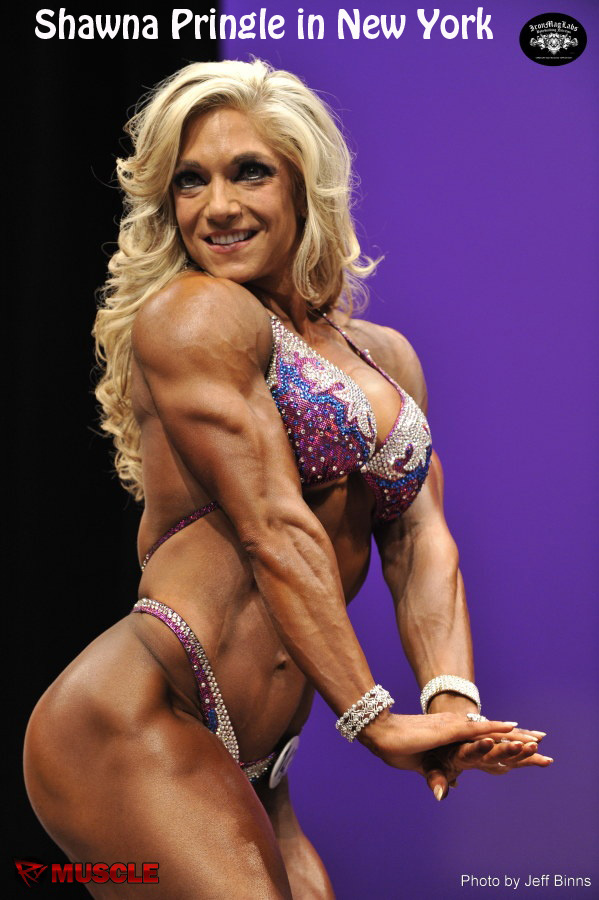 When the first thing you hear about a competitor is, "Pretty girl," followed by some very complimentary notes on her physique, you know you've got to check it out. That was the comment when Shawna Pringle, last year's Team Universe Overall Women's Physique champ, took the stage at the New York Pro on May 17.

For once the online commentary was dead on. Pringle is the WPD real deal.  Pretty muscle and plenty of it—in a bigger-than-figure sort of way. Well proportioned, too, with a nice waist. And, oh, yeah, pretty. The 33-year-old doctor of physical therapy from Virginia is a bouncy blonde babe whose smoking-hot body is highly competitive; attributes the judges undoubtedly noticed when they awarded her the runner-up position in New York behind three-time winner Juliana Malacarne. It was Pringle's pro debut, which makes her a prime candidate for the nowhere-to-go-but-up list.

Originally from Pennsylvania, Shawna grew up in a gym—literally. It was owned by her dad, who she also followed into bodybuilding, stepping onstage for the first time, with dad, in 1999. Over the years she's done every division but bikini and found she had the proverbial too-big-for-figure bod, but she seems to have hit on the perfect fit in WPD. Plus, with a background in cheerleading and gymnastics, she loves to perform and knows how to make the most of the posing round.

Next up for Shawna is the Tampa Pro on August 8 and 9, when we'll see where this up-and-comer bounces next.

My annual trip to my hometown for the NPC/IFBB Pittsburgh Championships is always a great opportunity to make new friends backstage—or in the audience, which is where I met Andrea Calhoun. The tiny figure pro was sitting with her trainer, Dexter Jackson, a.k.a. Mr. O ’08, but she'd already gotten my attention at the judging, where the callouts had suggested that a top-five finish was in her future. 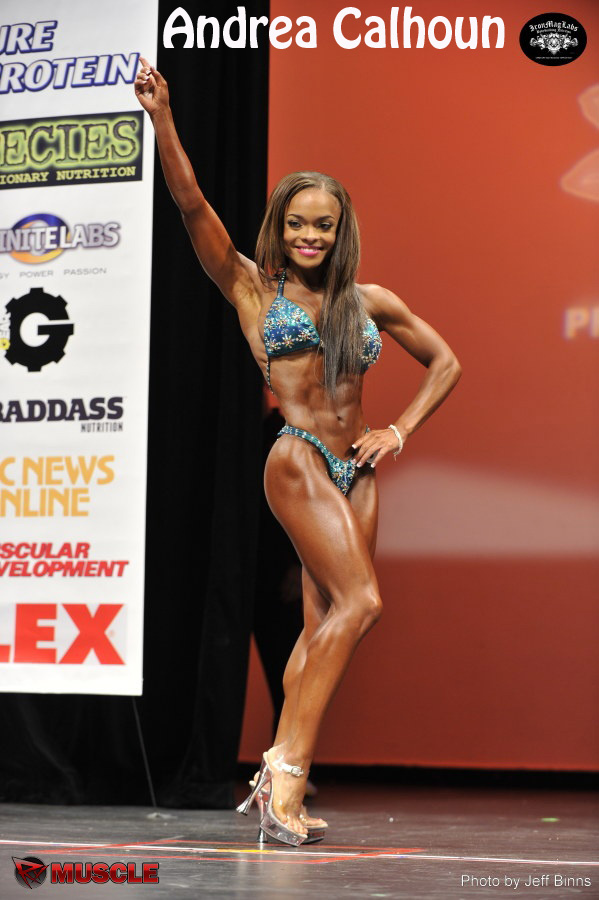 om Killeen, Texas, took fourth in Pittsburgh on May 3 and then fourth in New York and third at the Toronto SuperShow on May 31, all of which has her tied for second in the Olympia Qualification point count, as of this writing.

Calhoun is what we in the fitness-magazine business call a real transformer: She ballooned up to 30 pounds overweight—at 4'11"—while in college, changed her life and transformed to the sparkling total package you see in the accompanying photo.

One fun fact about Andrea: She has an identical twin sister, Andreanna, who's an NPC bikini competitor and hopes to follow her into the pros. That's potentially double trouble—a.k.a. bad news for the competition in not one, but two, divisions.

Zsuzsanna Toldi—Europe in the House

Hungarian figure pro Zsuzsanna Toldi really stands out in a lineup—and not just because she's said to sport a more European-style physique. Muscle and proportion plus tight conditioning have a hand in it, as does the fact that she's a comely blonde (yup, another one). The two-time world champion from Budapest, who has been called Europe's Queen of Figure, is spending some time stateside this season trying to crack the local winner’s circles. In fact, she's already Olympia bound courtesy of the Bodypower Pro, which she won in Birmingham, England, on May 17.

A top fitness model and Hungary's only figure pro, the 5'7" Toldi started in bikini. She made her pro debut with a third-place finish at the Mozolani Pro Classic in Slovakia on May 3, and this reporter got a look at her at the Cal on May 24, where she took sixth out of 28 in a lineup led by Camala Rodriguez. Reportedly, Zsuzsanna had been ill in the days leading up to the show and so might have done even better.

Although she was relegated to 11th (out of 28) in Toronto, it's easy to predict that we've not seen the last of this pleasing plate of paprikash before the O.

And now for someone 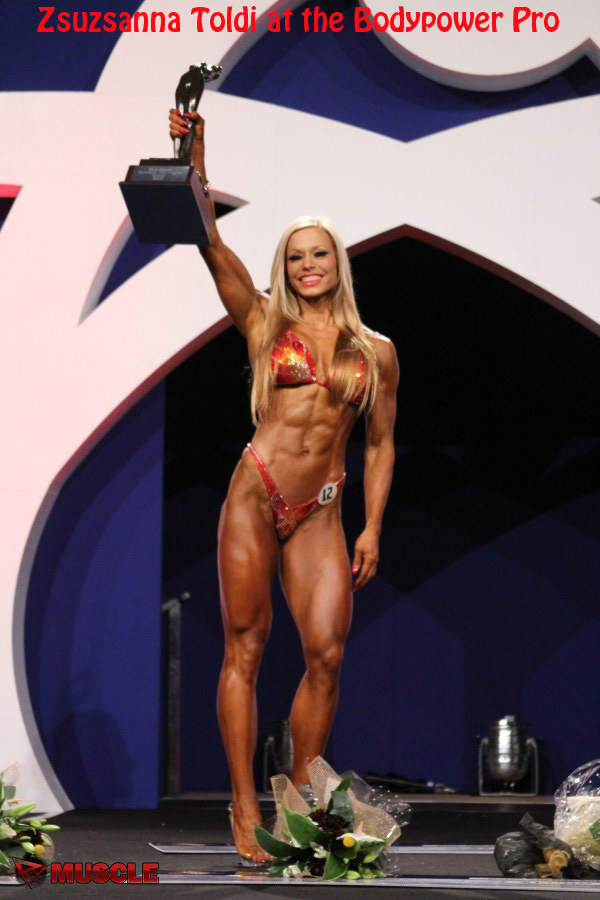 who always looks good to this reporter.

Catching Up With Colette

You could have knocked me over with a feather when I saw that Colette Nelson was getting back into the game—and that she'd be trying her bodyparts at physique at the Toronto SuperShow and Omaha Pro. Not that it's ever a surprise when a physique athlete comes out of retirement, but I knew that the Michigan-raised New Yorker had been busy building her career in diabetes education, in addition to various fitness-industry services. Her last appearance on a pro stage was at the Arizona Pro Show in 2010. I really thought she was done, but, then, we hadn't talked in a while.

A couple of notes for those who think that 2010 was a lifetime ago: Nelson's contest history goes back two decades. She was a top amateur heavyweight bodybuilder for years, winning the class at the USA twice—in 2001 and ’02—but missing out on the pro card that went only to the overall champ in those days. She was one of those "smaller, symmetry girls" and a terrific performer, regularly bringing down the house with her posing routines.

In 2004 she tried another route to the pros, and, in what's been called the "Year of Colette," she took the heavyweights at the NPC Team Universe, won the light-heavyweight and overall trophies at the IFBB North American Championships and earned heavyweight and overall honors at the IFBB World Amateur Championships, picking up her card along the way. As a pro she competed at the Ms. International and made it to the Olympia.

Coming back in WPD, Colette is having an experience not unlike that of numerous “smaller” bodybuilders who have come before her. In a sport that is meant to be figure bigger, not bodybuilding light, they are not an immediate fit. In Toronto SuperShow she took 11th out of 19. In Omaha, with 21 onstage, although she arguably looked better—and not as thick—she didn't make the cut.

Most of the following conversation took place after Toronto. 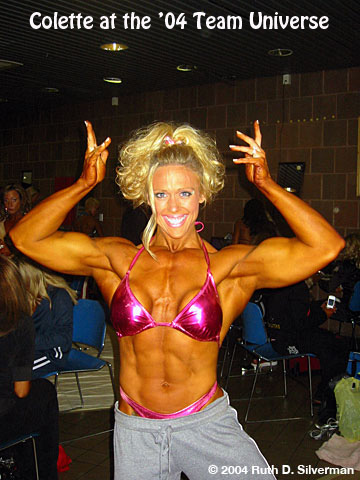 CN: I had a pivotal year—call it a midlife crisis. I turned 40, and it is the 10th year since I turned pro. I had a lot of injuries since I left the stage… and I was tired of training in pain, so I started rehabbing my body.

I have always stayed connected with the industry having my airbrush-tanning, makeup and hair business, so I was watching this new women’s physique division evolve. I always felt I never really fit in with the bodybuilders, as I was always on the smaller side. It got me excited to compete again.

CN: I actually wasn’t sure. I didn’t know how my body would look. I still train with intensity, but I haven’t been training as heavy as I used to and started being a bit smarter with how I approach my workouts. As I started dieting, I was thinking, "Maybe I could still do bodybuilding." But as I continued to diet, I was getting smaller and smaller. About two weeks out I decided to see Steve Weinberger and ask for his opinion. He felt WPD would be the best for me.

RS: Why did you choose these two shows?

CN: I am working full-time as a certified diabetes educator for a pharmaceutical company. It is very demanding and my first priority, whereas I used to put my bodybuilding first. I started dieting in January with the idea of getting into shape, so I knew that if I were to do a show, it would be in the summer. I wanted to do a warm-up show, and I felt doing back-to back shows would make the most sense with my crazy schedule.

RS: How long was your prep?

CN: This has been a 24-week prep. I started in January really focusing on my diet, and I was about 175 pounds. I competed at 147 on Sunday morning at the finals of the Toronto. I honestly s

till needed to be a bit tighter—around 144. I would rather take it slow, and I knew that I wouldn’t be able to do more than one hour of cardio a day with all that I have going on.

RS: What did it feel like to be onstage again?

CN: I loved being up onstage again. It felt comfortable—like I belonged there. I was nervous right before I got onstage, but as soon as I saw the audience, it was time to perform.

RS: What did you think when you saw the competition backstage? Were you surprised, or did you know what to expect?

CN: I have a lot of respect for the ladies. They were all beautiful and so sweet to me. I felt that I was respected and that the women weren’t as catty as back in the day. I remember having all these silly rivalries back in my bodybuilding days.

The women were so gracious. I forgot my bracelets and one of them let me borrow a few of her extras. I just was so impressed with all of them and how they treated me. Very welcoming.

RS: Your thoughts on the results?

CN: I had no idea where I would place. I knew that I didn’t peak on Saturday—damn, I was so frustrated with my body. By Sunday—the finals—I did it. I got to where I wanted to be. It was a night-and-day difference if you look at the pictures.

At this point in my life I am exploring something different. I don’t know how far I want to take it, so I needed to feel it out. I felt they were fair, and since I wasn’t my best until it was too late, I want to see where I will place when I bring my best package.

RS: So what's next? You said something about photoshoots?

CN: This whole competition season is a gift to myself. I already won. This was my birthday present and it would not be complete without a photo shoot with Bill Dobbins. I haven’t shot with him in 10 years, and I love his talent and concepts of the female physique. So I am flying from Omaha to L.A. to shoot with Bill, and Jill Ruddison and I are going to shoot for Planet Muscle. It is just great to be back in the game and meeting new people in the sport and remembering the things that I loved about competing.

RS: After Omaha, when d 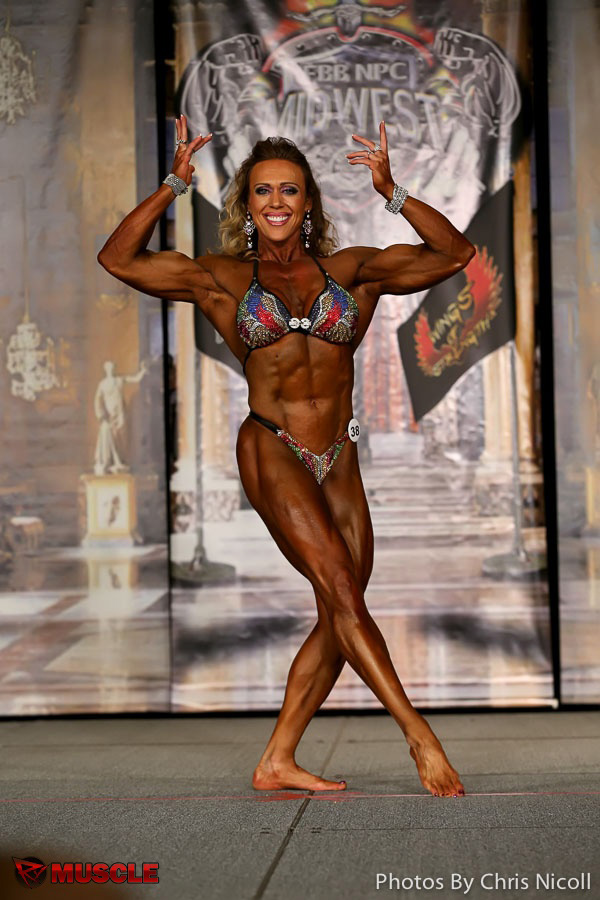 CN: I have to decide if I want to compete just to compete and enjoy the process and get into shape and see where the cards may fall, or try going at this with a different attitude that means molding my body to fit a certain criteria. I worry about losing muscle every day of my life—I can't imagine trying to do it on purpose.

Still, I love to compete and love the whole discipline it entails—and of course being onstage. I don't think you have seen the last of me, but I also am not sure where that leaves me when it comes to the callouts. As the sport evolves we shall see.