Is Becca Swanson the Strongest Woman Ever to Compete in Bodybuilding?

History has noted that in 1977 Jan Todd became the first woman to surpass 1,000 pounds in powerlifting's 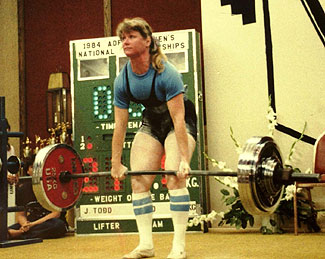 three-lift event.  Todd's totals included a 424 ¼-pound squat, a 176 ¼-pound bench press, and a 441-pound deadlift. Following Todd's watershed efforts came the seismic evolution of the sport.  Her 1,041 ½ total has been topped numerous times in several weight classes since then, and it points dramatically to just how rapid the progression of that sport's growth has been.  In fact, while Todd was still at the top of her game, she also became the first female to surpass the 1,200 pound level.  Today that mark is but a distant memory.

Like powerlifting, bodybuilding also experienced an unprecedented evolution in how quickly women's physiques changed, reaching levels of muscularity never before seen on a female of any size. And as could be expected, the pioneering bodybuilders of the day such as Rachel McLish are also now a distant memory.

During the decade of the 80's top powerlifters such as Vicky Steenrod, Mariah Liggett, Mary Ryan Jeffries, Tina Woodley, Jan Harrell, and Mary Ellen Jerumbo among others,  displayed the muscularity developed in their physiques on the bodybuilding stage, as well as its strength via powerlifting. And in the early years of bodybuilding's rapid growth these women - many of whom were national and world champion powerlifters - experienced notable success in both sports.

That trend would continue into the 90's and to the present day with such notable cross-over performers as Rachel Mathias, Paula Suzuki, Anita Ramsey, Ielja Strik, Mari Asp (who also competed in fitness events), Bonny Priest, Jill Mills, and more recently Laura Phelps-Sweatt, have all achieved at the highest levels of powerlifting while also affording themselves the opportunity to flex on the bodybuilding stage.

With little argument, the most successful powerlifter-turned-bodybuilder was former track & field star and world powerlifting champion Bev Francis who not only reached the IFBB pro level as a bodybuilder, but

won the 1987 IFBB Pro World Championship, while competing in six Ms.Olympia contests placing as high as second to Lenda Murray in 1991. Francis also played a prominent role in the Pumping Iron II movie released in 1985.

Of those who followed Francis to the posing platform, Mary Ellen Jerumbo also reached the pro level and has been a prolific entrant at bodybuilding events since turning pro in 1985 after winning the NPC National middleweight class that year. Continuing her dedication to powerlifting, Jerumbo squatted 507 pounds at a bodyweight of 138 pounds in 2000. Bench pressing phenom Paula Suzuki (who benched 352.7 pounds in the148-pound class in 1995 and is still fourth on the all-time list in that weight class), went on to win the overall NPC National Championship as a heavyweight the same year. Meanwhile, Jill Mills, who competed sparingly in bodybuilding events while living in Georgia, and placed second in the middleweight class at the NPC Texas in 1995, would become best known as a two-time winner of the ‘World's Strongest Woman' contest televised by ESPN. Mills has also posted impressive lifts in powerlifting.  The list (far too numerous to mention) goes on and on.

But it is Becca Swanson who has really raised

the bar when it comes to sheer total poundage achieved in official powerlifting events, while also having competed as a bodybuilder with good success at the amateur level. Put simply, she has few peers.

engineering graduate from the University of Nebraska in 1998, Swanson has broken so many powerlifting records, space and time does not allow them all to be listed here. Suffice it to say, they are numerous and impressive.

At 5-9, Swanson has normally competed in the unlimited division at a bodyweight in excess of 230 pounds.  But she has also set records in weight classes below the unlimited class.  Regardless, they are insanely huge numbers.

In the bench, Swanson's record stands at 600.8 pounds. She performed the lift in 2008 at a bodyweight of 240 pounds.  Swanson was the first woman to officially bench 500 and the only woman to pass the 600-pound mark.

But it is the squat that leaves many followers of

Although Swanson's bodybuilding career efforts took place over a four-year period of time, she was, nevertheless, far from a wall flower.  During the competitive season in 1998, Swanson was the heavyweight and overall winner at the NPC Nebraska, NPC Central States, and NPC Rocky Mountain Classic.  In 1999 she entered the NPC USA in Santa Monica and finished tied for 16th.  Then in 2000 she placed third in the heavyweight class at the NPC Junior Nationals, followed by a tie for 18th at the NPC USA.  In each case at the national level Swanson lacked the hardness to place higher (due in large part to her active involvement in powerlifting over the same period of time), although her overall structural balance was easily of national-level quality.  In fact, just two places in front of Swanson at the 2000 NPC USA was Sheila Bleck, who would, eight years later in 2008, claim the overall NPC USA crown.

As in any sport and its evitable evolution, women will aspire to even more dizzying accomplishments and Laura Phelps-Sweatt has become one of the most recent superstars to surface in powerlifting circles.  Her lifts are breathtaking, and at 165 pounds - even more astounding. In 2008 she successfully squatted 740 pounds and totaled 1,720 pounds in the 165-pound class.  In

2007 she also squatted 770 pounds in the 181-pound class - all are world best marks, and she will undoubtedly reach higher poundages in the future.

The most interesting aspect of Phelps-Sweatt is that in 2004 - as a bodybuilder - she won the lightweight and overall titles at the NPC Bodyrock!

Spirited discussions abound in the powerlifting world with regard to raw lifts versus bench shirt efforts. But the fact remains, raw or otherwise, performances in virtually every powerlifting weight class have far surpassed what anyone would have dreamed of in Jan Todd's day. The bottom line is the sport of bodybuilding has been a welcome haven for female powerlifters who were curious enough to strip away some of the extra weight needed for their sport, thus pushing along the evolution of both sports in the process.