for three years. It is even harder to believe that she is 50 years old!

Having just made the switch from figure to bodybuilding it looks like this is one competitor we are going to be hearing a lot about this year. So with that in mind let's find out a little more about this dynamic bundle of Texas muscle!

Okay Sylvia,  let's start with a little background info to take our readers up to speed...where do you come from and how did you get involved with  the wonderful world of weights?

"I am originally from Quito, Ecuador and I have lived in Houston since I was 12yrs old. Learning English was a challenge, as was coming to public schools where you're mixed in with boys in your classes... wait... did I say boys? YEAH, I was attending a nun school in Quito before moving to the USA!

"The first time I visited a gym here it was to jump up and down and enjoy the dancing at aerobic classes.  I didn't have any idea about muscle, definition and much less about competitions in bodybuilding.  In my early 30's I noticed girls with muscular arms and thought WOW, she's got toned arms! Yet, I kept on walking and did regular workouts at the gym."

Was it always your intention to compete?

"The intention was there YES! And wish I could have found someone to introduce me to this sport earlier.  Things really started for me after I attended a bodybuilding show here in Houston where I was shocked to see Ronnie Coleman as guest poser.   Then I saw the beautiful girls who walked around the auditorium holding their trophies...  I wanted to look like that so bad and kept wondering how in the world you got that ripped and toned?   I went back the following year and the year after that and kept drooling at this particular show The John Sherman Bodybuilding Show..."

What made you choose the figure class to begin your competitive journey?

"In 2007 the Bikini division didn't exist and for my slim and petite size (Sylvia is 4' 11") I couldn't see myself as a tough bodybuilder.  I liked the MODEL look, with high heels and nice ‘bling- bling' outfits in the figure class."

Did you have any role models at that time?

"Yes, but it was more male bodybuilders rather than females. I would follow Ronnie, Lee Labrada and Gunter -my future husband. Of course I also liked Monica Brant and Timea Majorova."

How many years did you compete as a figure athlete and what would you say was the highlight of your career in that category?

I competed for three years in the figure division. My first competition was June '07. One of my most inspiring competitions was the 2009 San Diego figure competition where I met Gina Alliotti.  Her positive energy transmits so much that I followed her videos for working out tips and also her videos on posing routines."

The decision to turn to the physique class....how did that come about?

"You mean from Figure to Bodybuilder?  WOW! Just to recall how that happened gives me a great sense of pride.  I think people of my age and above truly appreciate the effort it really takes to get ready for such event.  We all are different and our bodies respond so differently.

"I guess you could say that ‘exhausted and confused' is where I was before doing this cross over.  I had won the overall title in a show in Ecuador, placed 4th at the Round Rock show in Austin and then when I did not place at all two weeks later in the Dallas Europa it was like a slap in the face! That is when I decided to switch classes."

Was it an easy transition for you?

"Nothing is easy in life but if you have the passion it takes to achieve your goals then you'll do anything that it takes to get there.  I must admit my nutritionist had a lot to do with this cross over.  He was so certain I had reached the measurements needed to compete as a bodybuilder. I also love challenges so I took him up on this.  My personal trainer helped me with my posing and as a team I can say WE did it!  I literally was tearing up back stage out of disbelief!  It was such an emotional moment for me.  It was my 5th competition and to win 1st place in the Masters and 2nd in the Lightweight was unbelievable. I was so proud that I walked out with a huge grin!"

What did you have to change about the way you trained and your diet?

"My diet really wasn't a big problem for me because I had been dieting most of the year. However, this time I couldn't touch my crunchy peanut butter desert I would sneak at times!  I had to drive my mind to stay disciplined...and it sure does work!

"The hardest part for me was to recall the classy and sexy ways to bring myself to each pose.  As a woman, you want to give the judges the correct pose but get there in a unique feminine way. So your hands, smile and presentation become an entire package to be delivered as perfectly as you can."

Do you think being a more mature competitor has made it easier or harder to gain the extra muscle needed to switch classes?

"When and if I stand next to a 25yr old perhaps I then would say being mature is a benefit.  As for gaining more and more for each competition? Yes, for me it's a hard and challenging task each time I hit the weights.  However, the thought of standing on stage makes me go the extra mile!"

How would you assess your physique in terms of strengths and weaknesses?

"I look at my ‘before' pics and I see myself as weak and simple.  Even though I have a small frame I love

adding more and more weight to my reps and challenging myself just to see how far I can go now.  I like it and the more I do it the more I get pumped and inspired. Yet, I do need outside inspiration at times when my body seems to become stubborn and lazy.  When I see a trainer flex a muscle, or a TV show like The Strongest Man' or even a song with lyrics that say ‘I am independent and strong'...that makes any weakness go away!"

I believe you have a nutritionist as well as a trainer....how important is it to you to have outside help in this respect as many bodybuilders choose to go it alone....

"I don't consider them ONLY as Nutritionist and Trainer, I consider both as mentors and true advisors.  We are a team and I have learned that people with positive advice and attitude bring you to be positive and help you reach goals.  I can't say enough about Keith and Scottie. They are both amazing and experienced.

"I am a fanatic when it comes to this sport but by no means do I have the years of experience they both have.  I do respect the ones that choose to do it alone but at some point in their life I am sure they also had the same help."

What are your thoughts on the new bikini division?

"It's great for those young girls who love modeling because it gives them an incentive to work out and keep themselves in shape.  However, some girls I've seen in the Figure division enter as Bikini at same show and I don't believe that is fair..."

How many years do you see yourself continuing to compete?

"My goal is to get my Pro card this year. Achieving this at 50 years old would make me so proud and from there I would think it is a given that I would just keep going. Continuing to stay in shape and being motivational to other people.  I know I'm already there because of the compliments I get from females who want to have my arms and legs!  And here I thought I had chicken legs...lol!" 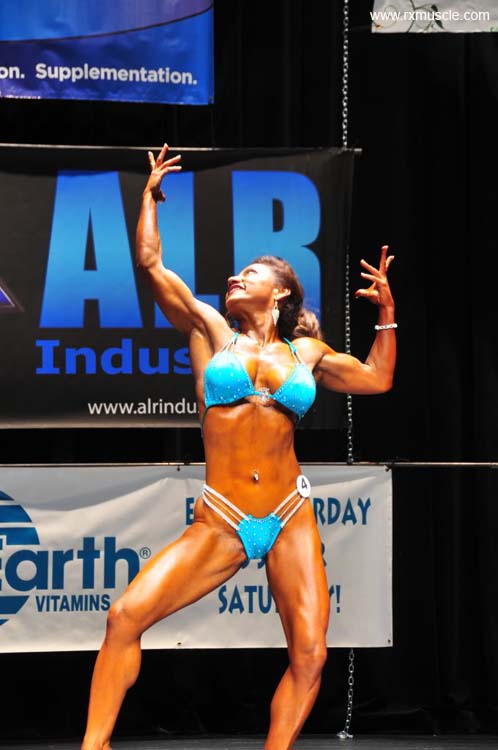 What are you looking forward to the most when it comes to competing in the bodybuilding rather than the figure class?

"I would love to be known as a ‘brick house' bodybuilder!   That would just say I'm a tough, mean and lean jamming bean!  I want to catch people's attention when I am on stage and have a different look.  As a figure competitor I always wanted to give my best and I think as a bodybuilder I want a tougher look but keeping it feminine at same time."

When can we expect to see you on stage?

"I love this question! As soon as March 20th in San Diego... but this time as a bodybuilder.  I am also going to Nationals in July in Pittsburgh; it is set in stone already so it's training most of the year with no breaks."

"With the internet world, some have googled me and found out my Corvette Cover page and story saying I work for Qwest. I am also on Face book and can be contacted at:

Any inspiring thoughts you want to end on?

"Follow your instincts and always be positive. If you hit the gym, make every minute count if you want results.  Don't look back at what you use to be just focus on where you're going and what your goals are.   Time management is not practiced enough if you claim you ‘don't have time'.  Time is gold, use it and use it well."