Opinion: Can we please...? By Corey Young

Opinion: Can we please...? By Corey Young 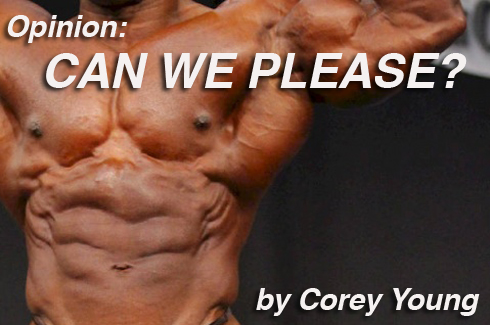 Someone once told me people don’t like swallowing heavy doses of the truth because it stings and it’s inconvenient.

That’s probably a bit of an understatement.

Ripping off a Band-Aid is stinging and inconvenient. Swallowing heavy doses of the truth is more like having your stiches ripped out one by one. It’s painful. It’s messy. And once it’s all finally over you’re left trying to find a way to patch things up and make some sense out of what the hell just happened.

But that’s the thing about addressing cultural truisms. There is no clean and easy way to do it. In order to let the truth flow out, and allow the healing and regrowth process to begin, you’ve got to deal with the pain and the messiness that comes along with it.

If you would like your bodybuilding cultural stiches to remain fully intact, then I suggest you stop reading here.

Can we please...?  Stop with the PubMed PhD’s.
While I’ve never been someone who opposed the injection of intelligent, truthful information into conversations about training or nutrition, we’ve reached a point now where almost nothing can be said or written without setting off a tsunami of criticism in the way of posts, tweets, and comments from self-anointed PubMed PhD’s who feel it’s their civic duty to make the world aware of some obscure twenty-five year old study on pregnant rats which just so happens to present some barely relevant contradictory facts that have never since been duplicated in any way, shape, or form.

The amount of high falutin intellectual arrogance that exists from this perpetually expanding group of keyboard gangsters operating safely in an accountability free zone behind the anonymity of a user name and an avatar is absolutely staggering. It’s created an environment where intelligent debate can no longer exist because any modicum of moderation becomes quickly dowsed in gasoline and drowned in flames by professional antagonists who are so convinced of their own intellectual superiority that any argument counter to their own is considered borderline heretical.

For some strange reason facts have suddenly become very divisive – which seems a bit paradoxical when you think about it. The very nature of fact would suggest that there shouldn’t be anything to argue once something has been proven true.

But even if for some inexplicable reason we can’t all agree on what the actually facts are, can we please agree that this ugly trend needs to fade away into obscurity and get filed away somewhere in a deep dark corner alongside other embarrassing moments in bodybuilding history that we’d all rather soon forget. Preferably right alongside memories of those zebra stripped hot pants that were popular out at Gold’s Venice in the early 90’s.

Can we please...?  Buy every member of the bodybuilding media a Thesaurus.
Over the last three decades the Darwinian evolution of both the culture and the physiques in the bodybuilding and fitness industry has undergone a rate of change faster than even the great Joe Weider in all of his infinite wisdom could’ve ever imagined. With that being said; why is it that despite the seemingly endless stream of media coverage, videos, podcasts, and articles available for our immediate consumption that we are still seeing the same old topics regurgitated over and over again, with the same old language, constantly populating our newsfeeds and dominating our headlines?

Webster’s lists a combined 70 synonyms for the words “big” and “freak” in its vast literary expanses, which raises an obvious yet pertinent question. At what point did everyone agree to never venture outside of the unofficially approved words list, and decide to settle right into the comforts of bland language mediocrity?

The way we consume our media may have undergone a technological revolution, but the actual content of that media is changing at the speed of continental drift.

What is it that’s preventing creative new perspective from escaping this black hole of contextual description? I wonder if it’s been collective negligence from media members ourselves that developed from our inability to administer an honest self-assessment. Or is it simply a matter of complacency because no one has ever demanded that we do better?

Whatever the case may be, I believe that we as media members have a fiduciary responsibility to all of our readers and listeners. They don’t deserve better. They deserve the best. So can we please all collectively agree that it’s time to start stepping our game up?

Can we please...?  Have someone steal Vince McMahon’s playbook.
Once upon a time professional wrestling was nothing more than sideshow oddity relegated to performing in back alleys and high school gyms in front of a handful of dedicated cult-like followers who were met with a suspicious raised eyebrow of curiosity anytime they publicly admitted to their guilty viewing pleasures.

And then Vince McMahon came along and completely changed the game.

The genius of McMahon’s legendary skills as a promoter probably deserves its own symposium at Harvard Business School, but the thing that really elevated both McMahon and professional wrestling into stratospheric success was something he realized very early on about branding. Once he stopped trying to push wrestling as a form of sport, and started pushing it as a form of entertainment the popularity of the organization as a whole began to explode.
He stopped trying to sell the skill, and instead started to focus on trying to sell the show. He created characters with larger than life personalities, and it was the constantly evolving storylines surrounding those characters that helped to make each event so fascinating. Even if the match itself undelivered on action or skill, McMahon’s ability as the ultimate puppet master to pull the strings and create real palpable drama was enough to keep sucking fans in and generating interest.

This is exactly where bodybuilding falls short. There is no theater in bodybuilding. While the art of the competition might continue to generate a strong cult following with the base members of the community, the actual competition itself provides very little for outsiders in the way of entertainment value. There are no larger than life personalities. And the possibility of creating any real universal narrative capable of drawing in new fans is all but nonexistent thanks in large part to the fractured relationships that exist between the bodybuilding media outlets.

If the bodybuilding wants to continue to grow it might be time to steal a page out of Vince McMahon’s playbook and start focusing on how to build the brand around entertainment. Or better yet, instead of settling for stealing a single page can we please have someone step up and volunteer to steal the whole damn thing?

The bodybuilding and fitness industry may very well be in the best shape that it’s ever been, but that doesn’t mean we shouldn’t all demand that it be better. The very nature of the competition is based on taking someone else’s brutally honest assessment of your weaknesses, moving forward, and then doing whatever it takes to turn those old weaknesses into new strengths.

But ignoring the problems, or flat out refusing to acknowledge they even exist, is the sort of cultural arrogance that we’ve seen cause empires, athletes, and businesses to fade and collapse time and time again. So can we please all agree that it’s time to rip open a few stiches, let some truth flow out, and allowing the healing and regrowth process to begin?

Do you agree?  Discuss in the Muscle Central Forum