A Word About Losing the “Love Handles”

A Word About Losing the “Love Handles” 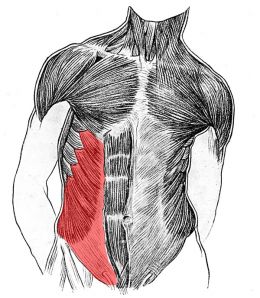 everyone knows that the exercise known as “side-bends” is meant for working the sides of the waist, also known as the external obliques or “love handles”.  The term “love handles”, however, is generally used when someone has too much fat in that area.  But whether one’s goal is to lose that fat, or simply to create definition in that area, the first exercise that comes to mind is usually “side-bends”.

However, there is quite a bit of misunderstanding regarding exactly what that area is comprised of, what can realistically be done to change it, and even how to do a “side-bend” correctly.

Let’s start with some anatomy.  The muscle that extends from the front of the ribcage, down to the pelvis, is called the Rectus Abdominus - the “six pack” - in gym jargon.  This muscle’s function is to pull the pelvis and the sternum toward each other, which is what we do when we perform an abdominal crunch.

The Transverse Abdominus, which lies beneath the Rectus Abdominus and whose fibers run horizontal to the torso, has the job of rotating the torso (left and right) - primarily.  So, although performing exercises that involve torso rotation are good for strengthening this function (ideal for sports that involve similar movements), they will not change the appearance of the midsection.  They will not “spot reduce” the fat that is on the waist, and they will not produce any sort of visible musculature - even if you are super lean.  Again, this is because it’s hiding beneath other muscles.

The External Obliques move the torso in several ways, but their primary function is lateral flexion of the torso (bending sideways).  When these muscles are worked, by way of exercise or other activities, they become stronger and more developed - but they do not cause the fat that is on the sides of the torso to diminish.  Again, this is known as “spot reduction”, and it’s a myth.

The belief that one is able to lose fat in a local area of one’s choosing, simply by working the muscle that is closest to that fat, has been perpetuated by marketers of products who bend the truth (i.e., lie) in order to entice you to give them your money.  It’s wishful thinking.  And - frankly - there’s more money to be made by perpetuating this myth, than there is by revealing that it’s impossible.  Nevertheless - spot reduction is physiologically impossible.

Fat is stored on our bodies in a form called “adipose tissue”.  This is the storage form of fat, and it cannot be burned, spent or reduced until it is first converted into “free fatty acids”.  This process does not happen locally - it happens systemically.  In other words, when your abdominal muscles are working, they cannot cause the neighboring “adipose tissue” to convert to “free fatty acids”, and then have that be available as back-up fuel.

This conversion process happens all over the entire body simultaneously, or it does not happen at all.  If back-up fuel is required, the working muscle (or muscles) send a “systemic” signal throughout the entire body, for tiny amounts of adipose tissue to convert into free fatty acids, and then travel through the circulatory system, to the working muscle(s).  This is why we are able to lose fat on our entire body - including our face - when we perform exercise on a stationary bicycle.  Even though the legs muscles are primarily the only one’s working, the fuel demand is systemic, so it pulls fat from everywhere on the body - not just the legs.

Now, the question you should be asking is “when is back-up fuel required?”.  Good question.  You see, if you’ve eaten plenty of food, there is plenty of fuel (calories) - swimming around in your bloodstream - so why would your body need back-up fuel?  It wouldn’t, unless you’ve modified your diet and restricted some of those calories.  I’m oversimplifying here a bit, in order to not complicate the process too much.  But the simplest way to understand how the fat loss process works, is to begin with the understanding that body fat is stored fuel, and it will only be spent when your calorie demand (by way of exercise or other activities) is greater than the calories you’ve eaten.  And when that happens, the body will begin releasing its stored fatty deposits from all over the entire body - it will not happen in the order (or place) of your choosing.

Let’s assume that you have now organized your schedule so that you’re exercising daily (the more often you exercise, the better - naturally).  A combination of cardio exercise and weight training is likely to produce the best results. In addition to exercising daily, you have also modified your diet.  You’ve reduced or eliminated most of the sugars and fats in your diet, and you are eating “clean” - as they say: lean meats (fish, chicken, pork, egg whites, etc.), lots of vegetables, legumes, salads and whole grains (not flour).  Further, you also limit the total calorie intake.  So far, so good.  You are now on your way to getting super lean.

What you want now, is to get “ripples” on your midsection.  This will require working the Rectus Abdominus and the External Obliques.  For the first group, your best bet will be any exercise that emphasizes spinal flexion (curling of the torso) - like ab crunches.  Leg Raises are not especially good, because the majority of the movement is coming from the flexing the hip joint; the abs are not connected to the legs.

When doing Leg Raises, the secondary movement might involve spinal flexion, but - because it’s not the primary movement - it will require more effort, with less reward.  So why bother with it?  It will not improve your “lower abs” - either by way of diminishing the fat that’s there (i.e., spot reduction), or by adding “ridges” to your abs.  “Ridges” occur as a result of fibrous dividers in the abdominal muscle sheet, and these are determined genetically - at the time of birth.  You can develop what nature has given you, but you cannot add “tendinous intersections” (as they are known, technically), because (as the name implies) they are essentially tendons.  The best ab exercises are simple crunches - either on your back, on the floor....or performed as a kneeling cable crunch....or some other way of flexing your torso forward, against resistance.

The sides can be developed by doing sidebends, against resistance.  And here’s where I see lots of mistakes being made in the gym.  The simplest version of a sidebend is performed by leaning to the left, and then to the right - with only your torso weight as resistance.  The next step will be to add a weight (a dumbbell) - but only to one hand - not both.  If you hold a dumbbell in your left hand, your right External Oblique will work at pulling the weight that is on the left.  But if you hold a weight in both hands, you simply balance it out, and you end up the same as if you held no weights (except your hands get tired of holding the weights).

A better version is one where you use a pulley, positioned about hip-high....instead of a dumbbell.  The reason this is better, is because now resistance is pulling on your torso horizontally, which is much better than having the resistance (the dumbbell) pulling straight down, essentially parallel to the torso.  Do four sets of 15 to 20 reps.

Do not be concerned that you’ll be making your waistline wider, mistakenly believing that your Oblique muscle will grow too much.  It doesn’t have that kind of capacity for growth.  But also do not make the mistake of believing that side-bends will somehow “convert” the fat that is there, into muscle - or that it will spot reduce the fat that is there.  By doing side-bends, you are only working the muscle, thereby causing it to develop some shape (as well as strength).  This will contribute to your overall calorie spending, as well as provide a nice appearance once you’ve shed the fat that covers it.

One word of caution: do not bend too far to either side.  The spine will only allow a certain amount of flexion either way.  Over-flexing to either side could cause discomfort, pain or injury to the your (mid or lower) back.  Also, more weight is not necessarily better.  Use somewhere between 20 and 30 pounds on the weight stack (assuming you’ll be using cables, as I recommend), for 15 to 20 reps per set.  Keep your legs relatively straight, with a wide stance, and focus on bending only your torso - from the waist, up.

Add this exercise to your regular abdominal routine and see the improvement in your external obliques!