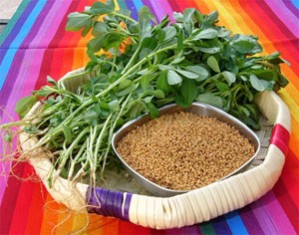 (Trigonella foenum-graecum) is a plant indigenous to India and Northern Africa that has demonstrated effectiveness in treating sexual dysfunction and which can increase sexual arousal partially by boosting testosterone levels. Fenugreek also has a myriad of other benefits, among them reductions in cholesterol and lower fasting blood glucose levels in diabetics. For this article, let’s focus on performance related benefits which fenugreek offers.

A 2011 study which examined the effects of 600 milligrams of fenugreek extract versus placebo in men who suffered from erectile dysfunction found a significant increase in sexual arousal and stamina in the men who were supplemented with fenugreek. Fenugreek also helped to maintain a normal testosterone level in the test subjects. For many men, that is reason enough to supplement with this plant, but fenugreek also has a beneficial effect on body composition and strength.

One published study from 2010 examined 49 men who engaged in regular resistance training and had them supplement with either 500 milligrams of fenugreek extract daily or with a placebo. During this time, the participants continued a four-day per week weight training program. After eight weeks the subjects were assessed in their strength while performing bench presses and leg presses and also had their body fat measured. The men who were given fenugreek supplementation had significant improvements in both weight training strength and body fat percentage when compared with the group who were given the placebo. In addition, a measureable increase in testosterone levels was discovered in the men who took fenugreek.

The reason for the boost in testosterone which fenugreek confers is due to a substance known as diosgenin. Diosgenin is one of a class of substances known as steroidal saponins, substances which can be converted to the sex hormones testosterone, progesterone, and estrogen. In men, diosgenin increases the testosterone metabolite DHT, which is then converted easily to testosterone. For this reason, it may be especially helpful to take supplements with fenugreek in men who have fluctuating or low natural testosterone levels.